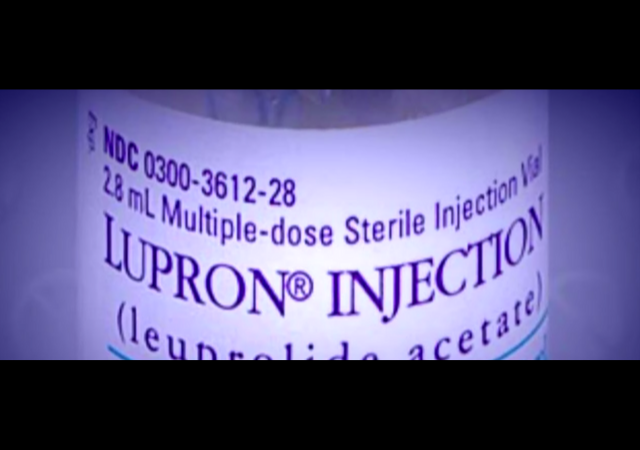 According to the FDA, Lupron, a drug created in the 80s to treat prostate cancer, has been linked to thousands of deaths. Lupron was later approved via prescription to treat endometriosis in women.

Now, Lupron is prescribed to children who have been diagnosed (accurately or not) with gender dysphoria as a hormone blocker.

Since 2012, the FDA has documented “over 40,764 adverse reactions suffered by patients who took Leuprolide Acetate (Lupron), which is used as a hormone blocker. More than 25,500 reactions logged from 2014-2019 were considered ‘serious,’ including 6,370 deaths.”

“Lupron is being prescribed off-label for use in children who have been diagnosed with gender dysphoria despite the lack of formal FDA approval for that purpose. The drug is clinically approved for treatment of precocious puberty, a condition where children start their pubertal processes at an abnormally early age and the blocker is administered for a short time until the proper age,” reports the Christian Post.

“The first well-documented case report of a puberty blocker like Lupron (a similar medication called Triptorelin which has an identical mechanism of action) being used in a young patient with gender confusion was published out of Holland in 1998 where a pediatric endocrinologist, working together with a psychiatrist, decided to use the medication on a 13-year-old girl suffering from gender dysphoria,” Michael Laidlaw, a Rocklin, California-based endocrinologist, told The Christian Post in a previous interview.

Reports have emerged in recent years showing that the pediatric version of the drug comes with few warnings about long-term side effects and leads to lasting and severe health problems.

When injected into a physically healthy body, the drug interrupts a normally-functioning endocrine system, yielding hypogonadotropic hypogonadism, according to Laidlaw.

“It’s a serious condition that endocrinologists would normally diagnose and treat because it interferes with development, but in [gender dysphoria] cases they’re inducing this disease state,” he said in an interview with the National Catholic Register.

In 2017, the FDA said it was “conducting a specific review of nervous system and psychiatric events in association with the use of GnRH agonists, [a class of drugs] including Lupron, in pediatric patients,” in response to questions from Kaiser Health News and Reveal from the Center for Investigative Reporting. The government agency was also reportedly reviewing seizures that stemmed from use of Lupron’s pediatric version and other drugs in its class.

As Laidlaw pointed out, the issue is psychological and not an endocrine condition.  The Christian Post continues:

The therapeutic idea behind the use of Lupron for treatment of prostate cancer is that by inhibiting the flow of testosterone over the prostate and reducing it to a low, undetectable level, prostate cancer tissue is prevented from growing, Laidlaw told CP in a previous interview about the drug’s dangers.

Unlike prostate cancer, a disease where the drug at least serves the purpose of targeting the malignant masses on the organ, Laidlaw said he knows of no psychological condition that is treated by putting hormones out of alignment from their normal levels.

Lupron’s side effects have prompted independent investigation over the years for its alleged crippling side effects, particularly in women who were prescribed the drug as a remedy for endometriosis.

One of the greatest harms to the patient is conflating a serious mental issue as a biological/medical issue and providing a treatment for a disease that doesnt exist.

The late Dr. Thomas Szasz couldn’t have said it better.

The whole biz is designed to destroy vulnerable kids by arresting their normal development and mutilating them. Drug reactions are a bonus.

It’s probably for the best.

I don’t support the use of Lupron for blocking puberty. Based on what I know – which is imperfect – it is misguided, expensive, and damaging to one’s development.

However, I question the 6,000+ deaths number. Because it is used to slow the advance of prostate cancer (it does not cure or send it into remission), I wonder if many of these deaths are being conflated with unhealthy patients for whom AEs are correlated and perhaps in some way contribute to but are not fundamentally cause of. In my experience, Lupron is not a drug that causes 1000s of deaths, although it definitely has side effects that can be unpleasant.

That in no way changes my opinion of how so very misguided its use potentially is in transgender therapy.

Is a fake media scare okay if the result is good?

No, as you can see for yourself in the FDA page linked above, it’s deaths due to adverse reaction, second only to “Hot flush”. Deaths due to the primary cancer would go under the “Drug ineffective” bar, that is another 1179 cases.
Since I am a doctor myself, let me state that in the last 20 years I remember many, many drugs that have been retired from the market for only a fraction of this figure. Including some that were otherwise very effective and with a non-controversial indication.
It’s politics, again: type “Mifepristone” in the box: 3779 deaths for the abortion pill (Ru-386).

From what I have read, it can really throw the liver out of whack causing liver damage too.

Plus, I believe there are alternatives to Lupron now that have less side effects too.

So, maybe it is on its way out.

I agree that you raise a valid point – while the 6k deaths may be a valid number associated the drug, a large percentage of the deaths were likely caused by other factors with the drug being a smaller contributing factor. Somewhat similar to the number of deaths due to vaping – ie where vaping wasnt the primary cause of the death, but the final kicker.

Once you go Pro-Choice… Conversion therapy including indoctrination (e.g. “=” or transgender/homosexual couplets) and medical corruption (e.g. transgender/neo-sexuals) that targets adolescent and prepubescent children.

It will be considered irrelevant just like “adverse reactions” including death to vaccines, because we must address gender dysphoria as a public health crisis. Who cares how many children die as long as the bureaucrats are happy there are very few exemptions (California basically no longer will allow medical exemptions – the Bureaucrats know better than the family doctor!).

And if Mommy and the Gay counselor says a boy is a girl…
https://www.lifesitenews.com/news/mommy-says-im-a-girl-a-fathers-final-chance-to-save-his-son-comes-in-court-in-october

Wonderfully said. As an attorney who deals with vaccine injury, my first thought was that this is the further of sacrifice of children to a scientifically unproven agenda.

Vaccines have been in uses since 1796. There’s been a worldwide population crash since then, and we’re about to die out.
Also, the stars do not move, they’re fixed in the Firmament about the flat Earth.

ps, can you throw some more quotation marks around randomly chosen words in your screed? Quotation marks make everything moar seerius!

You start messing with hormones, sh** gets real fast.

Darwin would be laughing, if he was alive to see this.

Any attempt (beyond simple replacement in cases of clinical deficiency) by mankind to tamper with the sex steroids has been a failure.

Even HRT for post-menopausal women has huge side effects. Some of the effects of testosterone replacement therapy are not well understood, either. It’s no wonder these problems are occurring.

Now, these same mentally disturbed people will sue because someone made them a drug to mess with stuff that shouldn’t be messed with for the sake of one’s own physical health.

And we’re supposed to be concerned about this? How.

I hate to be crass about this, but every time someone states the obvious about the transgender nonsense, they are excommunicated from public life, ridiculed to the point of abuse, and called deniers.

The only way for this nonsense to stop is for more people to die from it.

Very uncomfortable thing to hear, however, Experience is the best teacher because it runs the only school in which fools can learn.

Lupron should be available over the counter and through Amazon.

One would think professional medical associations would at least censure physicians who remove apparently healthy body parts, yet in today’s political climate it seems more likely a physician might be censured (or worse) for refusing to participate in such procedures.

It would seem obvious that if a body organ is healthy yet a patient wants it removed then the problem must lie someplace other than in that organ, and that that “someplace” would be the appropriate part to treat. Yet we seem to live in a time when saying the obvious (or even refusing to mouth absurdities) can get one into some serious trouble.

“Freedom is the freedom to say that two plus two make four. If that is granted, all else follows.” — George Orwell