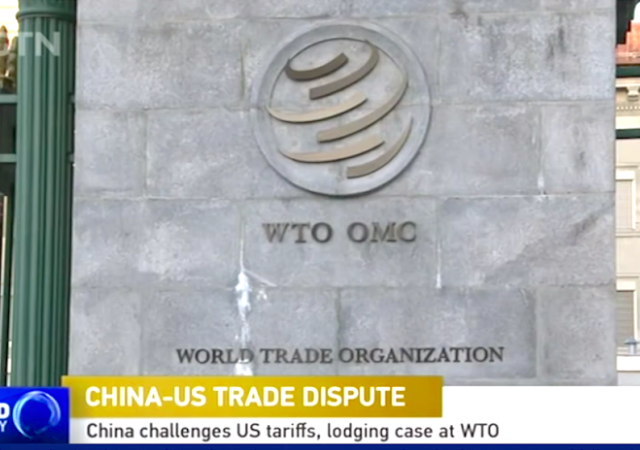 China filed a complaint to the World Trade Organization (WTO) over the tariffs set in place by President Donald Trump’s administration.

The 15% tariffs went into effect on Sunday. It covers items like tools, apparel, some shoes, and a few electronics. The overall value of the goods adds up to $111 billion.

China did not share details of its case with the WTO. Officials claimed it “affected $300 billion of Chinese exports.” China brought two other lawsuits previously against the U.S. to the WTO.

Trump’s administrations insisted it is “penalizing China for theft of intellectual property that is not covered by WTO rules, although many trade experts say that any tariff hike above the allowed maximum must be justified at the WTO.”

The U.S. said the rules do not apply to the tariffs since officials pushed them ahead “to protect moral values.” Those apply to “trade regulations over gambling, animal rights and public broadcasting.” From Reuters:

“China has taken the unilateral decision to adopt aggressive industrial policy measures to steal or otherwise unfairly acquire the technology of its trading partners; the United States has adopted tariff measures to try to obtain the elimination of China’s unfair and distortive technology-transfer policies,” it said.

China had chosen to respond not by addressing U.S. concerns but with its own tariffs, “in an effort to maintain its unfair policies indefinitely”.

The U.S. submission also said its actions were exempt from WTO rules because they were “measures necessary to protect public morals” – a clause used in the past to argue for trade restrictions over gambling, animal rights and public broadcasting.

China must have forgotten that it also announced new tariffs on American goods that equals $75 billion.

Those tariffs should have also gone into effect on Sunday, but China decided to delay most until December 15. Officials implemented “increased duties of between 5% and 10% on a variety of major American goods exported to China, including soybeans and crude oil.”

The new tariffs only include “one third of the more than 5,000 product lines listed in the” announcement from China in August.

interesting. That explains a lot.

We should leave the WTO. And get out of the (legitimately anti-Semitic) United Nations. And even NATO – Europe isn’t even contributing, and it is literally a Turkey problem.
And the IMF and World Bank.

notamemberofanyorganizedpolicital in reply to tz. | September 2, 2019 at 11:51 pm

Sounds to me like someone is winning this trade war.

Xi overplayed his hand. If they haven’t started already, foreign manufacturers will begin leaving. US consumers won’t pay a 15-25% premium for Made In China when we can buy Made in India, Made in Japan or Made in Taiwan without the premium.

In the end there’s no one to blame but the greedy business leaders who moved their manufacturing to a Hard Core Bright Red Communist country because “CHEAP” and “NO REGULATION”. They had to know the gravy train would run dry eventually. Even Mittens.

I don’t know if Xi overplayed his hand since he doesn’t have a strong hand to play. Trump holds all of the strong cards assuming Americans have the patience to let it play out as Xi plays the Kerry/Obama/Biden/Romney strategy of assuming Trump will be gone after next year.

China’s economy is collapsing and everything at home is in crisis. Hong Kong may very well signal that Xi is in a state of dead panic. Trump has forced China to drop its mask. He seems to have a knack for forcing his opponents to drop their masks. Americans, should they decide to get unwoke and actually pay attention, can now see the world as it actually is. Enemies everywhere.

Good! China is not our friend. Every dollar we give them is used to harm us. The best thing for America would be to end trade with China.

Agreed. The Nixon/Kissinger gambit was a bad one for the US.

China knows they will lose this with the WTO. It is purely intended as ammunition for the domestic opponents of President Trump.

China has no case this is simply window dressing to attempt to influence the voters in U.S. and provide another ‘tarrifs bad/ trade war bar’s narrative.

Bottom line is the longer China continues to overplay their hand the uncertainty created benefits U.S. As supply chains are relocated out of China it weakens them. China will eventually capitulate on forced technology transfer, intellectual property theft and non standard trade barriers. Trump will continue to offer a face saving way out but they are going to have to feel more pain before they allow themselves to internalize the new reality.

Personally I think that China waits until after the election.

If China doesn’t they will have to live with the tariffs, which are now and will continue to erode their economy as non Chinese corporations relocate their suppliers.

The Chinese economy cannot survive long-term with the weight of the tariffs and the uncertainty those tariffs create. Short term thru the 2020 elections sure they can hold out that long and from their point of view they should. Assuming the reelection of DJT, they will ultimately have to reform, reorder their economy away from export dependency or face internal political upheaval.

My two cents worth.