“The way he jumped toward me, he was determined to kill. No question.” 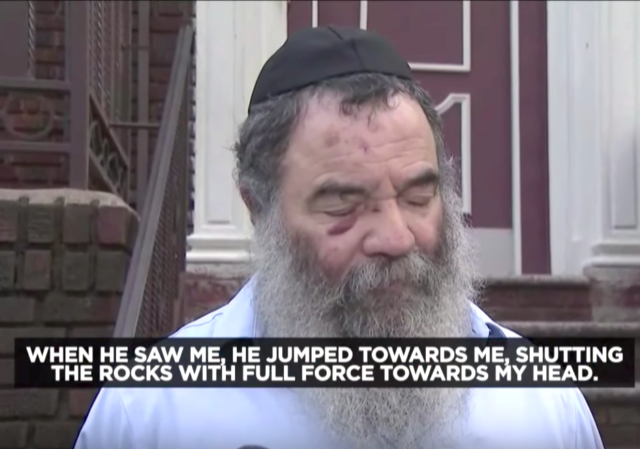 Police arrested Oniel G. Gilbourne, 26, in connection with the attack on a 63-year-old Jewish man in August.

The police charged Gilbourne with “assault as a hate crime and criminal possession of a weapon.”

A suspect has been arrested in the brutal August 27th assault of 63 year old Rabbi Gopin in #Brooklyn.

Oniel G. Gilbourne, 26, was taken into custody yesterday & faces charges of assault as a #hatecrime & criminal possession of a weapon. pic.twitter.com/WYKtHED0zG

Gopin spoke out after the attack. From PIX 11:

“The way he jumped toward me, he was determined to kill. No question,” Abraham Gopin said, adding that his attacker used the phrase “dirty Jews,” during the attack, which police are investigating as a hate crime.

Gopin was viciously attacked in Lincoln Terrace Park in Crown Heights as he was on his morning walk around 7:40 a.m. Tuesday, police said.

The Brooklyn rabbi lost two front teeth, suffered a broken nose and multiple lacerations to the face in the beating, police said.

“He came to me, fighting with hands,” Gopin said. “I was protecting myself. It was a fight for several minutes.”

This is what Gilbourne allegedly used on Gopin.

Police are searching for a man who bashed a jewish park-goer over the head with this paving stone.
Rabbi Abraham Gopin (63-years-old) was left unconscious with a broken nose, lacerations all over his body, and missing his two front teeth pic.twitter.com/6LOd7NoK2w

Gopin walks in the park almost every day. He does not know the attacker.

I’m sure A.O.C. is offended by this hate crime against an innocent Black man. She surely won’t take responsibility for her words causing the attack.

The Rabbi is black? Please explain.

That’s easy. Undoubtedly Gopin took the brick and hammered his own face with it while at the same time holding onto Gilbourne in order to frame him.

And I am sure Trump and Putin personally ordered Gopin to do it. It’s all part of the Vast Right-Wing Russian Collusion Conspiracy (TM).

Pull a Jussie Smollett? AOC at the border. AOC in Brooklyn. She has the requisite activist temperament.

It’s all about the Benjamins, isn’t it?

The likes of the attacker are coddled by the likes of pelosi, in exchange for street thuggery duties.

As can plainly be seen: one of the black Irish.

There was a time way back at the turn of the previous century when the Jews would patrol their own neighborhood, and take care of things as was needed. Men traveling in pairs. They didn’t bother with asking the police for their help as they knew none would be forthcoming.

Perps generally did things ONCE.

The JDL still exists, but apparently it’s not as prominent as it was:

Well. The important thing is they both vote Democrat…./

Gopin is unlikely to be a Democrat. Orthodox Jews vote predominantly Republican.

“Punch a Nazi”. And anyone who supports Trump is a Nazi!

Anyone says ‘punch a nazi,’ ‘trump is a nazi,’ is in fact a nazi, and should punch themselves.

sickening–don’t care if he’s jewish/catholic/muslim/pagan, etc–he needed help and nobody did a damn thing–thank god do not live in new york or la(though have lived in both)–the idea that some punk can take a rock, whack a harmless man with impunity and then walk away unscathed is simply incomprehensible to me

Obviously the attacker was in dire need of reparations! Had he been given his, he would have bought the victim a cup of coffee and discussed rap music with him.

LoL. I know exactly what’s going to happen now. Gilbourne’s public defense attorney will claim his client suffers from “diminished mental capacity” (ie is retarded) and some liberal judge will place him in a psych institution for “evaluation”. Then once enough time has passed so that everything is pretty much forgotten he’ll be released, come in front of the judge who will drop all the charges and let him back out into society to wreck more havoc on innocent people. Rinse and repeat as many times as necessary. Guaranteed.

Contrary to what radical professors and activists and their cohorts in the media and popular culture would have you believe, this demographic has no fear of “white supremacism” or the police.

They actually hold whites and the police in complete contempt.

Never forget Jessie Jackson’s Kinsley gaffe that he was relieved any time footsteps from behind at night were not those of young black males. An ugly truth, but the truth, nonetheless.

This currently dangerously dysfunctional demographic is enabled by the various aforementioned activists who turn reality on its head and insist “white supremacy” and the police are the real danger.

As long as this charade goes on, we will have this sort of greatly under-reported phenomenon.

We know that if a single act of a MAGA-hat-wearing white person attacking a black person occurred, everyone would hear the story. Jussie Smollett, anyone?

But you’d be hard-pressed to find anyone outside of the local area—who isn’t a news junkie—who is cognizant of this ongoing phenomenon of young black males attacking Jews.

The media just aren’t interested for obvious reasons. And so the problem will continue until a threshold of tragedy is surpassed, at which point the media will be forced into covering it … grudgingly, and only at the required bare minimum.

If you take such acts of dishonesty and their real-life consequences in helping to perpetuate a dangerous problem as evidence of disregard bordering on contempt for victims … well, it becomes arguable that people in your profession are acting as de facto enemies of the people.

I’m just saying it’s arguable. And the fact that it’s arguable means your profession has reached a very bad state.

How did I know before I saw the pic that “Brooklyn Man” wasn’t white.

You should fear as “racism” and “anti-Semitism” have been overused and diluted and created a PC overlay.

The headline could not be “Black thug from Brooklyn…”.

And is it a hate-crime when on the SJW privilege scale someone with a 6 attacks a 9?

Will there be a call for banning rocks or investigating black supremacist hate and closing down social media sites where he may have posted something?

63 is not elderly nowadays.

He was in need of reparations, so he attacks a guy whose family probably came over way to late and from the wrong parts of Europe to have had anything to do with the slave trade.