Stop hiding, Biden. Refute Giuliani yourself instead of cowering in the corner.

They claim all he does is lie about the controversy surrounding Biden and Ukraine.

I have problems with Giuliani but is this the way a campaign should act? Can you imagine the outrage if Trump did this?

We are writing today with grave concern that you continue to book Rudy Giuliani on your air to spread false, debunked conspiracy theories on behalf of Donald Trump. While you often fact check his statements in real time during your discussions, that is no longer enough. By giving him your air time, you are allowing him to introduce increasingly unhinged, unfounded and desperate lies into the national conversation.

We write to demand that in service to the facts, you no longer book Rudy Giuliani, a surrogate for Donald Trump who has demonstrated that he will knowingly and willingly lie in order to advance his own narrative. 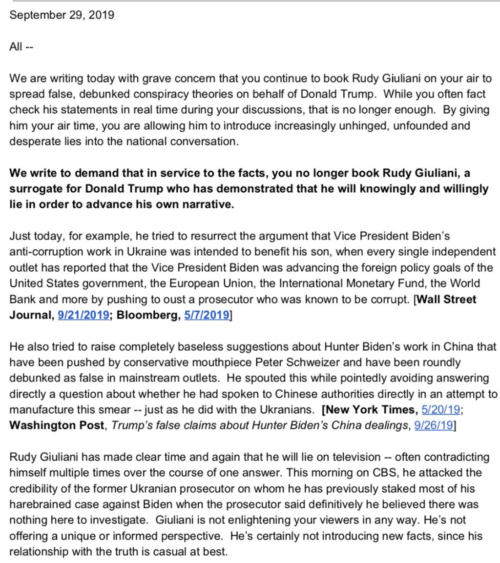 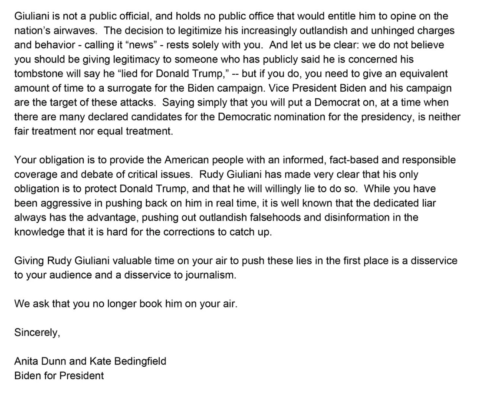 Giuliani has said numerous times on TV that Biden pushed then-Ukrainian President Petro Poroshenko to fire the country’s then-prosecutor general Viktor Shokin due to his investigation into energy company Burisma Holdings. Biden’s son Hunter sat on the board.

Video has surfaced of Biden bragging about pushing Poroshenko to fire Shokin by threatening to withhold aid.

I explained the whole fiasco in a post on Friday. It includes statements from Shokin. He claimed Poroshenko asked him to stop the Burisma investigation. When Shokin refused, Poroshenko fired him since Biden threatened to withhold $1 billion in aid.

I mean, it’s a he said, he said situation.

Grynbaum made an excellent point:

As Mr. Trump’s personal lawyer, Mr. Giuliani remains a highly newsworthy figure, particularly amid an escalating impeachment inquiry in which Mr. Giuliani’s own actions in Ukraine could play a central role. It is likely that Mr. Giuliani will remain a coveted booking for television journalists seeking insight into the president’s mind-set and legal defense strategy.

As for Mr. Biden, he has shown little eagerness to engage one-on-one with TV anchors. The former vice president has declined to appear on any of the weekend political talk shows since declaring his candidacy, mostly reserving his on-air appearances for venues like late-night comedy shows and “The View.”

Giuliani appeared on CBS and ABC on Sunday morning. Those networks asked Biden to come on the shows, but he refused. The campaign suggested national co-chairman Rep. Cedric Richmond (D-LA), but the networks said no.

Instead of hiding, why doesn’t Biden face the music?

So if the news media doesn’t obey, he’ll “Ukraine” them. So what dirty money is he leveraging this time for his clout to backup his threat? Billion dollar government subsidies to keep them afloat?

Where could Biden have possibly picked up the idea that the MSM takes orders from the Swamp?

Rudy scares progs like “coolway”. He has their number. He’s honest and they, coolway, are corrupt to their very core.

notamemberofanyorganizedpolicital in reply to Barry. | September 30, 2019 at 1:07 pm

Biden is just adorable. He really thinks he is a viable candidate. Sorry Plugs, your Democrat pals and Obama threw you under the bus. You’re dead man stumbling along on his walker.

They need to take out Trump. You happened to be in the way. Either they will go with Warren or they will bring in Michelle as a ringer at the convention.

The butt-hurt is strong with this one……

Wow – this is really weak on Biden’s part. When you’re accused of a crime, it usually is not a good play to say “Stop that man who accuses me of a crime from talking!!!!”

Doyle Lonnegan, “What was I supposed to do – call him for cheating better than me, in front of the others?”

Everybody says Rudy is horrible, but he is getting the information out there, which the Biden campaign noticed.

Silencing opposition. One more obvious reminder of what will happen if more than three branches of the five present branches of fall to Dems (exec, legislative, judiciary, bureaucracy, MSM).

“Everybody says Rudy is horrible…”

Note, that “everybody” are the corrupt and evil progs.

Rudy, he’s the one that told moneybags middle easterners to eat their check after 9/11.

Rudy, he’s the one that came in and cleaned up NYC.

Progs, like “coolway”, just hate it when someone is competent and honest.

I noticed that, in one of his TV interviews, the interviewer tried to confuse two different Ukranian prosecutors, and he called her on it.

notamemberofanyorganizedpolicital in reply to Valerie. | September 30, 2019 at 1:19 pm

Valerie in reply to notamemberofanyorganizedpolicital. | September 30, 2019 at 2:18 pm

Yep, that’s the one. Thank you for the proper link.

Thanks Valerie, I had not seen that.

And thanks for the link as well.

So quid Pro Joe thinks he still has some power?? Time to reeducate him.

notamemberofanyorganizedpolicital in reply to 2smartforlibs. | September 30, 2019 at 1:16 pm

Biden couldn’t even get Ex-Obama, whose VP he was for 8 years, endorsement.

Biden too point but this was not a one man show. With billions of bucks, the Dems were far more than likely skimming off a “management fee”. OK… I’ll be magnanimous and include many GOP and bureaucratic grifters in the mid but as bipartisan as it may be…The big money goes to Dems. The cost of doing business…so to speak. Where did that $1.8 billion go that was funneled to Hunter’s employers bank?

So with all the stones being thrown at Rudy, most have missed. He’s not the concise lawyer I would hire but he’s over the target or it wouldn’t be so noisy.

Odd, he looks pretty damn concise to me.

He has the democrat presidential contender in the lead begging networks not to let Rudy talk.

His delivery seems a bit disheveled.The fact that has direct knowledge and they have nothing but talking points. (don’t misunderstand I love the guy)

Just remember, the progs make up stuff requiring Rudy not only speak to the very complicated facts, but be sharp enough to recognize the BS the progs thro out. It’s not easy. I personally think he’s doing a fine job all things considered. He’s a one man wrecking ball for the commies. He’s doing this all by himself, investigating, defending the president against false allegations, and appearing on news programs.

No, Groping Joe is not begging. He is demanding.

I always thought that Rudy was a poor choice for the President’s attorney. He seemed to get things wrong, and then would contradict himself.

But this letter from Biden’s campaign shows how wrong I was. The unwritten story in this letter is that Rudy is effectively getting the story out, and the Dems are scared of him. Go, Rudy!

Once again it’s proven. Scratch a Democrat, find a totalitarian.

Two essential steps of the totalitarian. Control who has the guns. Control the public airways.

notamemberofanyorganizedpolicital in reply to fscarn. | September 30, 2019 at 1:14 pm

This is a good choice for Biden. He doesn’t need to face his accuser when he has hordes of mindless media minions to do it for him. All he needed to do was point and give the command.

So the Democrats’ position is, “Giuliani is hurting Trump, whom we’re trying to destroy! SILENCE GIULIANI!!”

Makes perfect sense to me.

As far as I can tell, you and Mr. Giuliani are in substantial agreement about the basic facts of your use of American money to get a prosecutor fired.

If you have extenuating circumstances, please let us know.

The weakness of this reminds me of my baby sister who growing up loved to hit, slap and poke at me when mom and dad weren’t watching. When finally I’d have enough of it and give her a swat on the butt, she’d yell “he hit me” and I’d get walloped.

Pretty pathetic of the Biden campaign – and quite a contrast between him and Trump who seems to relish pummeling all comers.

You Republicans have failed to realize that there is but one legal candidate for President and you have to be a member of the party if you wish to vote for President.

I have no idea what the hell you’re talking about.

I’m not a member of any party and have voted for a president in every election since I became of age.

In some states I’m even allowed to vote in a party primary.

And what’s with “one legal candidate”? There are certainly more that one every election.

Ask a Democrat if Trump is a legitimate President…

I’m not quite sure how your comment gets us to “there”.

The commies didn’t think GWB was a legitimate president.

Why? They’re living in a fantasy land of stolen elections and eliminating the electoral college. You can’t reason with someone who operates on emotion instead of facts. I really don’t care what any democrat has to say. It would be like giving my dog human vocal cords.. a never ending litany of complaints and grievances without a single iota of logic.

I think the “sarcasm is strong in this one”, Barry. 😉

Apparently. It requires a reading that isn’t there.

Even the current commie party has yet to declare there is only a single legal candidate. I know that’s what they would like.

Yeah. I guess that much is implied if everything our candidate does is illegal. At least the Dems are predictable.

Well, why not? The media seems pretty cool with the whole communist send-the-counterrevolutionaries-to-the-gulag gig Democrats are pushing.

And it’s not like the media gives a fig about the Bill of Rights, anyway.

— Let’s assume for no good reason that the DoJ under Barr is actually working methodically to aggressively prosecute a whole massive swath of IC/DOJ/Dem collaborators in the FISA abuse/Russia hoax against PDJT, and assume that the left was always going to claim political animus for motivating any charges, and assume that the trials would happen in deep blue DC where’s they’d never get a conviction:

Does Rudy’s airing of (legitimate) grievances against them on behalf of the president jeopardize the ability of the DoJ to carry out arrests/indictments by heightening the left’s ability to claim political animus motivating the prosecution?

“Does Rudy’s airing of (legitimate) grievances against them on behalf of the president jeopardize the ability of the DoJ to carry out arrests/indictments by heightening the left’s ability to claim political animus motivating the prosecution?”

No, of course not. The “left” (prog commies) are going to lie about it all anyway.

Receiving flak just means Rudy is over the target.

Mr. President, a new nickname you can tag on Sleepy Joe:

“I have problems with Giuliani but”

Wy do RINO and Never-Trumpers feel they have to condemn Trump or Trump supporters before they are allowed to comment on horrible behavior by Progressives, elected Demcrats, etc.

Have some brass Mary and do to the two-step that Trump and Trump supporters need to be ashamed of themselves before you can even level ANY critique of the opposition.

Typical of the left, they only believe that “free speech” is to push their propaganda and lies, if you dare say anything that “offends” them, the “freedom” is to be shut down.

Heh. If he can’t face Giuliani, how does he think he’s going to face Vladimir? Or Zoolander, for that matter.

So much for Captain Barn.

Who gives a Eff what Biden the Buffoon wants or feelz,he’s going to lose the Demokommie nomination any way.

Wow. The same networks that have been so very happy to knowingly spread blatant lies about Donald Trump for the last 3+ years are now being told to hide the truth about Joe Biden. It should be interesting to see what they decide to do.

Please, please, please stay in the race Joe.
President you will never be, but entertaining you is.