And it’s not the first time 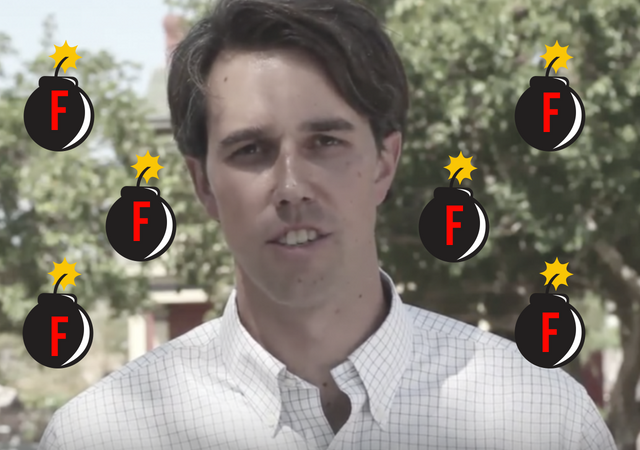 From the Daily Caller:

Bash, who was sitting in for Jake Tapper on “State of the Union,” began the segment by showing video of the former Texas congressman discussing gun violence at a recent event — and in that video, O’Rourke’s use of the term “f**ked up” was bleeped.

O’Rourke followed that clip by dropping the same term on the live show.

This is not entirely unusual for Beto. Last year, when O’Rourke was running for Senate against incumbent Sen. Ted Cruz, his penchant for the “mother of all swear words” is not new. So profuse is his use of profanity on the campaign trail, that the Texas Tribune made a compilation cataloguing Beto’s potty mouth. I blogged about that here.

No one likes overly polished smarmy politicians. Politicians are, after all, supposed to be of the people in order to represent our interests. But it’s perfectly possible to be sociable, relatable, and real without being profane.

I don’t like his rhetoric. He needs to stop interviewing.

I happened to be in the car between errands and heard this live on CNN on the magic radio.

I laughed out loud, this guy is a so pathetic… he thinks he is somehow edgy and cool and he was demonstrating that he is really, really mad about these shooting because he used a dirty word on TV.

Part of me wants him to just go away but more recently I think its best that he hang around and further embarrass himself while providing great entertainment to those of us with a brain.

“with a brain” – I remember being taught that truly intelligent people did not need to make their point by cussing – they have a larger vocabulary that does it well.

Born and raised in the 50’s and 60’s I have a different take … it was unmanly to cry – for many of us boys so raised, it was “stop crying or I’ll give you something to cry about” and so we sucked it up. Crying and other natural expressions of feeling/emotion became bullying and swearing.

Consequently whenever I hear someone cuss like that, I just consider them as someone who needs to learn to cry again. Realistically, or at least what I learned in counseling, the expression of such anger is a secondary emotion. The first feeling is usually hurt or sadness – which quickly gives way to frustration that nothing can be done to fix the situation that caused the feeling and that quickly turns to anger. Us men often tend to quickly move past emoting to solution / problem solving the situation that triggered the emotion.

Of course, it may just be that Beto is just an ass.

Profanity is the refuge of the dull wit.

True masters of verbal parry and thrust are getting scarcer by the day. We need to start teaching rhetoric again!

He needs to drop out of the Socialist-Democrat Primary race, but I guess he’s not finished using other people’s money yet.

And let’s get the name right – Robert Francis O’Rourke is his name, not Beta or any other iteration of “loser”.

When I see this photo, I think THREE WEDDINGS AND A FUNERAL – AND A HUNDRED F-BOMBS!

100% guaranteed this was scripted by O’Rourke’s campaign to get attention and show the Democrats’ genocidal base that he “cares”.

Of course it was. Desperate people do desperate things particularly in politics. It should also be pointed out that the CNN anchor said nothing when Beta used the dirty word.

Some people have speculated that it was just to sell T shirts, or something ridiculous.

Wait until the primaries are closer to see what other spontaneous utterances he and his staff have planned. He’s Young! He’s Hip! He’s so 2020. All the really cool kids Dig Him!

Calculated cursing comes off as robotic and scripted as you would expect. Fake beto is done.

When you need to start “F”ing it out to show how cool and hip you are, you’re done.

He has to get headlines somehow, and this is safer than being arrested for drunk driving.

He is truly the emptiest of the empty suits running for the Democratic nomination.
It is inconceivable to me that Cruz didn’t beat him by about 20% in the Senate election.

I know and I live in Texas, I was shocked at how close it was and still am
Unfortunately I live right outside Austin and there still are tons of cars with Beto stickers.

And then there’s old Willie singing on a campaign stop with him as Beto skateboards on stage, I am sure Putin is shaky my in his boots

LOL! We even have Beto morons up here on the Llano Estacado. I never thought I would see that, but it’s here.

I am afraid that Augustus McCrae and Woodrow F. Call are gone from these parts.

Only because Gillibrand dropped out. They were running neck and neck for most shallow.

I watched this, and thought about how the media castigates DJT for his language. They have all sorts of nasty things to say about him, “crude, bombastic,” etc. And yet, DJT does not use cuss words.

Cuss words are meaningless. You can delete a cuss word from a sentence, and the meaning of the sentence will remain unchanged.

The difference between this man and DJT is that DJT knows how to deliver pointed and strong meaning, suited to his purpose.

Maybe a good theme song from a Leftist might he!p…Jackson Browne…. “Running on Empty”.

Paddy seems to be the modern version of the 1970s middle-aged man who wore leisure suits and said things like “chickie-baby” and “groovy” believing it made them cool despite their age, life Hugh Hefner. Then came the “hipster doofus” era in the 1990s.

Some guys never grow up.

notamemberofanyorganizedpolicital in reply to Pasadena Phil. | September 3, 2019 at 12:09 am

With all his wife’s money you’d think he’d fix his buck teeth.

Firewatch in reply to notamemberofanyorganizedpolicital. | September 3, 2019 at 6:21 pm

tikilin in reply to notamemberofanyorganizedpolicital. | September 4, 2019 at 12:29 pm

When I see him, all I can think of is him with a carrot, saying “What’s up Doc?”

Dare we think Skateboard Jesus kisses his white haired mother with that mouth of his? I shudder at the thought…..

Swear words are fine, but have to be used well. The F-word isn’t the mother of all swear words, though. Check any cockpit voice recorder for the final word. Oh S***.

First you say it, then you do it!

If he ever manages to actually make a sentence using colorful Marine Corps language would that be Stolen Valor? Of course, he will have to stop using all those non cuss words.

All that’s missing his his riding a skateboard and drinking a beer.

What zero this guy is.

Speaking of f-bombs, how’s this for black racism against white people:

On a major black show:

Beto O’Dourke is such a Marxist Eff bag,oh that’s the guy that dropped out of the race because of his 1 % support. Thought he was the second coming of JFK,guess not.