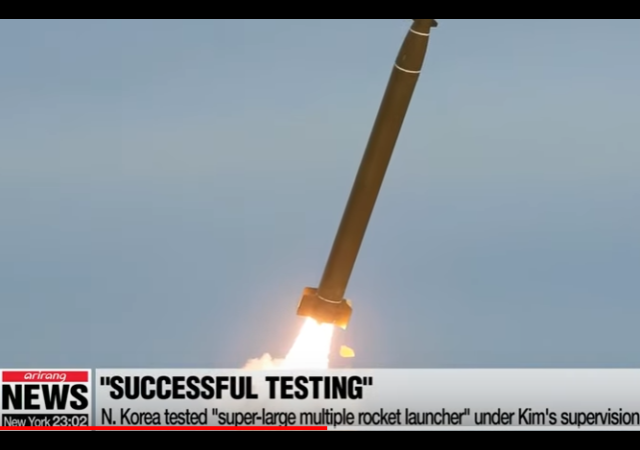 News has come out that North Korea launched at least two unidentified projectiles toward the sea on Tuesday. This action comes hours after the nation’s officials offered to resume nuclear diplomacy with the United States.

The North’s projectile launches and demand for new proposals were apparently aimed at pressuring the United States to make concessions when the North Korea-U.S. talks restart. North Korea is widely believed to want the United States to provide it with security guarantees and extensive relief from U.S.-led sanctions in return for limited denuclearization steps.

The North Korean projectiles fired from its South Phyongan province, which surrounds its capital city of Pyongyang, flew across the country and in the direction of the waters off its east coast, according to South Korea’s Joint Chiefs of Staff and Defense Ministry.

These two reports are the latest in a series of tests that have occurred after peace talks collapsed in February during the Hanoi Summit.

After more than a year of refraining from missile tests, North Korean leader Kim Jong Un’s regime has conducted 10 launches since May including Tuesday’s. Most of those are believed to be short-range missiles, and experts say they have shown impressive technological advancements.

In August, two projectiles were launched. A US official confirmed then that North Korea launched short-range ballistic missiles, and said they appear to be similar to other recent launches.

The previous four rounds of launches by North Korea were believed to be short-range missile tests, which Pyongyang is barred from conducting under United Nations Security Council resolutions.

One of the weapons fired was a newly developed rocket launcher.

The “super-large multiple rocket launcher” was tested in an exercise observed by Kim about two weeks ago.

The KCNA [Korean Central News Agency] report said the test was aimed at “measuring the time of combat deployment” and implied another test could follow.

“What remains to be done is running fire test which is most vivid character in terms of the power of multiple rocket launcher,” KCNA said.

However, the offer of resuming peace talks marks a reversal in the deterioration of diplomatic relations between the US and North Korea that has occurred in the past few months.

North Korean Vice Foreign Minister Choe Son-hui said in a statement that the North is willing to sit down with the U.S. “at the time and place to be agreed late in September.”

…Last month, North Korean Foreign Minister Ri Yong-ho called his U.S. counterpart, Mike Pompeo, “the diehard toxin of the U.S. diplomacy” for suggesting that all sanctions on the North would remain in place until the North’s denuclearization.

In a statement issued in late August, Vice Foreign Minister Choe said that expectations of dialogue with the U.S. are “gradually disappearing.”

Observers indicate that North Korea’s continued weapons tests are aimed to strengthen its diplomatic hand and pressure the U.S. to make more concessions when the talks resume. Perhaps such an approach will work out better for them than it worked for the Taliban.

the best the world can do is keep that country in an impoverished state and have a grid up that should they ever use a nuke on South Korea or Japan, they get hit threefold

notamemberofanyorganizedpolicital in reply to fishstick. | September 11, 2019 at 4:48 pm

The Communist Chinese Party is behind the launch.

Nothing happens in NK without the CCP doing it.

John Bolton is probably muttering “I told you so”…

What’s important here is heat from the missiles is contributing to Climate Change and the spent missiles are trashing out the ocean floor – Right? Where is AOC? Where are the Democrats when we need them?

notamemberofanyorganizedpolicital in reply to TX-rifraph. | September 11, 2019 at 7:51 pm

AOC should go stick her Donkey where the missile silo opening is so she can stop the next explosive launch.

Otherwise everybody will think she’s a big Bronx Fake.

How much of this is Kim, and how much china?

All part of Trump’s attrition strategy. After all, how many missiles could this shit poor country have? Waste ’em all on test flights.

Normal negotiation stuff. Transient give and take. Those who panic at the “take” part would not make good negotiators.

The only important point is the one at the end. Everything else is just scenery along the way.

Of course China is condoning (if not actively aiding) North Korea’s missile launches. North Korea is being used as a harassment tactic against the U.S. as part of the Trade War, just as the Hong Kong protests are no doubt being (very secretly) assisted by the CIA.

There can be no meaningful progress with NK until the U.S. and China come to a settlement.

It’s just Kim’s way of destroying his missile inventory. Next he’ll trash a few more by sending them to a landfill in Iran.

Interesting question that I haven’t seen yet. I know some of their missile launches go *over* Japan. Those are certainly scary.

Are these short range road mobile missiles, like the US HIMARS? And are they just getting lobbed into the ocean nowhere near Japan? If so, I don’t see the need for great pearl-clutching.