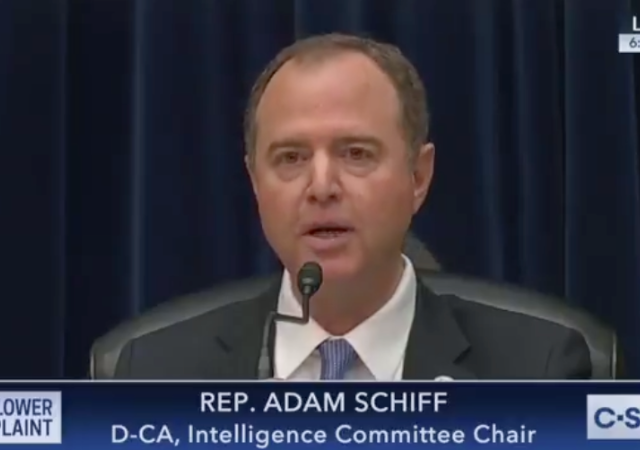 As if we did not need more proof that the impeachment inquiry into President Donald Trump is insincere from the Democrats.

Rep. Schiff re-writes the call transcript for added drama: “I’m going to say this only seven times, so you better listen good, I want you to make up dirt on my political opponent, understand, lots of it, on this and on that, I’m going to put you in touch with people” pic.twitter.com/1rV7BpEN6o

This is what Schiff said:

And what is the President’s response — well it reads like a classic organized crime shake down. In essence, what the President Trump communicates is this: We’ve been very good to your country. Very good. No other country has done as much as we have. But you know what, I don’t see much reciprocity here. You know what I mean? I hear what you want. I have a favor I want from you though. And I’m going to say this only seven times, so you better listen good. I want you to make up dirt on my political opponent, understand? Lots of dirt, on this and on that. I’m going to put you in touch with people, and not just any people. I’m going to put you in touch with the Attorney General of the United States — my Attorney General, Bill Barr — he’s got the whole weight of American law enforcement behind him. And I’m going to put you in touch with Rudy, you’re going to love him. Trust me. You know what I’m asking, so I’m only going to say this a few more times, in a few more ways. And don’t call me again. I’ll call you when you’ve done what I asked.

This is from the phone call transcript:

In opening statement, Rep. Schiff makes up dialogue to represent what Trump said to Zelensky. A rough transcript of the president’s words exists, and is available, but Schiff’s version is more dramatic. pic.twitter.com/f7gS4KIPge

After people called him out, Schiff tried to save face:

Later in the hearing, Schiff admitted that his fictional account of the transcript was a “parody.”

“My summary of the president’s call was meant to be at least part in parody,” Schiff tried to clarify. “Of course the president never said if I — if you don’t understand me, I’ll say it seven more times.”

Schiff on making up his own Trump call transcript: That was just a “parody”! pic.twitter.com/qCsGRXXkns

Schiff previously described the phone call as a mafia-like shakedown and “far more damning” then he could possibly ever imagine.

The transcript did not show any of that. It told the story of Trump showing support for Ukraine as it still battles a war with Russia in the east.

Trump never threatened to withhold aid from Ukraine if the new prosecutor did not investigate Vice President Joe Biden over the firing of the previous Ukrainian prosecutor. Biden supposedly wanted the prosecutor to stop investigating the energy company that employed his son Hunter.

Trump suggested an investigation and Zelensky happily agreed. Zelensky said the situation has become important to him as well.

Later on Wednesday Zelensky said no one pressured him at all.

A true low point for Congress. Republicans should call on Schiff to resign.

notamemberofanyorganizedpolicital in reply to dystopia. | September 26, 2019 at 1:07 pm

Truly frightening behavior, unbecoming of a deliberative body. If the American people allow creatures like this near power in 2020 we face a bleak future.

notamemberofanyorganizedpolicital in reply to Ulysses. | September 26, 2019 at 4:27 pm

Mitt Romney’s national security advisor in his 2012 campaign — a career CIA spook who rose to its top levels — sits on the board of directors of Burisma, the Ukrainian gas company that formerly paid Hunter Biden $50k a month despite his complete lack of credentials or qualifications.

Details about Obama, Biden, McCain, etc.’s illegal coupe overthrowing the Ukraine government. Go to about half way in the video clip.

Are you referring to the Republicans who sat on their hands while Schiff was performing his “parody”?

It’s the Wizard of OZ with the Cowardly Lion.

They already did. All 9 of them on the committee signed a letter asking him to resign March 28, 2019. There is also YouTube video of them reading the letter to him in a committee hearing. Obviously he refused while trying to claim the moral high ground.

What the heck happened to Drudge Report?

I stopped paying attention to Drudge years ago.

Drudge has gone Woketard. No idea why. MSDNC did the same around 2004-5. Have ignored both for years.

Temporarily setting aside the fact that this is a lame retroactive attempt to cover his ass, is parody appropriate for impeachment proceedings?

The debate clause of the Constitution gives Schiff absolute immunity for his disgusting behavior. Including immunity from slander.

notamemberofanyorganizedpolicital in reply to Liberty Bell. | September 26, 2019 at 1:08 pm

That KKKlause must be changed.

Martha Stewart went to prison for insider trading, not for lying to Congress. Restrain your impulse to come back with a snarky rejoinder, and instead get your facts straight.

You have to make things up when the evidence does not support your baseline claim.

For those interested Jack Marshall at Ethics Alarms has up a copy of the treaty between US and Ukraine that establishes cooperation between the countries for criminal investigation. The treaty was signed by Bill Clinton; Biden voted in favor.

[Hope I didn’t break any rules referencing another blog.]

Here’s a better link, in case you are into reading treaties…
https://www.congress.gov/106/cdoc/tdoc16/CDOC-106tdoc16.pdf

But visit Ethics Alarms anyway for some interesting commentary on this.

notamemberofanyorganizedpolicital in reply to amatuerwrangler. | September 26, 2019 at 1:09 pm

Thank You, wrangler! You are doing what the MSM should be doing but never does.

No it’s not and he should be censured and removed from his chairmanship, but since he is a Dim nothing will happen.

The lawlessness of the Democrats and the “Factlessness” of the media is quite frightening. Us common sense folk read the transcript and the complaint and laugh because it is obvious that nothing is there, but the twitter circles of journalists are spinning out of control seemingly convinced that they have found concrete evidence of an impeachable offense. Disturbingly, I don’t think they are gaslighting to convince people. I think they have fully lost their ability to distinguish between narrative and truth.

notamemberofanyorganizedpolicital in reply to Dr. Ransom. | September 26, 2019 at 1:11 pm

RE: ” Disturbingly, I don’t think they are gaslighting to convince people. I think they have fully lost their ability to distinguish between narrative and truth.”

In other words, God has made them lose their minds.

I also agree with Schiff that it’s an entirely separate issue that it wasn’t clearly parody.

He’s lied so many times it’s hard to tell when he’s doing a “parody”, especially during official proceedings.

do the democrats even think before they speak, the speaker of the house grew up with the ‘boss’of Baltimore. the democrats could give the Mafia lessons on extortion and tribute.

notamemberofanyorganizedpolicital in reply to ronk. | September 26, 2019 at 1:13 pm

RE: “the speaker of the house grew up with the ‘boss’of Baltimore”

That’s what I believe. The Mayor of Balitmore had a Mafia boss as his bosom and constant companion, so seems correct that the Mayor was a Mafia Don also. Remember too that the speaker of the house’s 23 year old bother was caught in having sex with underage girls too.

I’m hearing that The Romney 2012 campaign national security adviser is on the board of directors of the Ukrainian gas company, the one Biden’s kid worked for.

If there is ever a Senate Trial you can count on good ole Mitt to vote Democrat.

I’ve told y’all for years now that Romney is a corrupt POS.

notamemberofanyorganizedpolicital in reply to Barry. | September 26, 2019 at 4:31 pm

Sorry I didn’t see your post when I posted the same thing.

Ace is on it with a very interesting take:

Rep. Schiff may be an integral part of what is a con, an anti-Trump operation that involves some significant intel community players.

notamemberofanyorganizedpolicital in reply to stevewhitemd. | September 26, 2019 at 4:34 pm

That has long been obvious to close followers of these manipulations, Brennan, Comey, Rodenstein, etc……

The entire “whistleblower” report/complaint was written by a commie cabal. All that is required is to read the damn thing and you know it is not the product of a concerned employee.

It’s all contrived and corrupt.

notamemberofanyorganizedpolicital in reply to Barry. | September 26, 2019 at 2:58 pm

It’s being said that the LAWFARE group wrote it.

‘He Had Help’: Former CIA, NSC Official Questions ‘Too Convenient’ And ‘Too Perfect’ Whistleblower Report

What a disgusting little man.

swalwell getting more attention after he dropped out of the race, corey called him president, maguire called him congresswoman

I wish someone with more talent than me would take the Dr. Demento song “Pencil Neck Geek” and put a bunch of Shiff for Brains images with it, lol.

It’s sadly funny … the party that’s a parody of its former self opens the inquiry with parody.

notamemberofanyorganizedpolicital in reply to MrE. | September 26, 2019 at 4:23 pm

Sir, that was no parody!”

That was today’s Democrat Party!

What Trump is suffering from is his own big mouth! If you come to town bragging about how you are gonna drain the swamp, you’d better get in done before the swamp devours you! Schumer warned Trump about the intel community and Trump failed to heed!

That you Schiff? Or is it Nadler?

F the intel community. You too.

If this is such an open and shut case like the Democrats are declaring, why wouldn’t have Schiff just read the actual transcript instead of performing a whole “parody” bit? Methinks I just answered my own question.

notamemberofanyorganizedpolicital in reply to Patrick Bateman. | September 26, 2019 at 4:49 pm

From now until eternity, when anybody is in front of the committee and gets a question from Schiff, their first response should be, “Is that a real question or a parody, sir?”

I hear that Adam Schiff flashed a teenager, but that she doesn’t remember the incident or that she laughed hysterically at his minuscule privates.