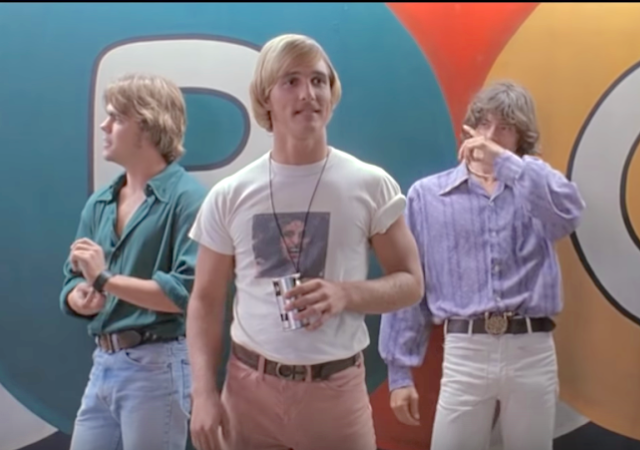 Everyone knows Matthew McConaughey loves his University of Texas. You see him at so many sporting events. The school even made him a visiting professor.

Now he has a full-time gig! The school announced:

McConaughey joins the faculty in the Department of Radio-Television-Film after serving as a visiting instructor since 2015, when he began co-teaching the Script to Screen film production class with faculty member and director Scott Rice. He developed the course’s curriculum, which provides a unique, behind-the-scenes view of each stage of a film’s production.

“It’s the class I wish I would have had when I was in film school. Working in the classroom with these students gives me a chance to prepare them,” McConaughey said. “Making movies, turning words on paper into film, is both a science and art – no matter the time or generation. The elements of truth and genuine joy for the process are timeless. That will always be our classroom focus.”

McConaughey earned a film degree in 1993 from UT Austin. He is an Academy Award-winning actor with experience in more than 50 films, including “Dazed and Confused,” “A Time to Kill,” “The Wolf of Wall Street” and “Dallas Buyers Club,” for which he won an Oscar and Golden Globe for his lead acting role. He also has experience as a producer, most notably for his work on HBO’s award-winning and critically acclaimed “True Detective.”

In addition to his professional pedigree, McConaughey has earned respect among college leadership for his personal investment in student success and his willingness to work with students beyond the classroom.

“He has a passion for teaching, and for all things cinematic, that is palpable, even infectious,” said Noah Isenberg, chair of the Department of Radio-Television-Film.

McConaughey’s Script to Screen class has helped transform how media production is approached and taught. Former graduate student and award-winning screenwriter Jason Kessler said McConaughey was able to translate his approach to storytelling in a way that could be understood by students with no industry experience.

“We are proud to welcome Professor McConaughey to officially join our world-class faculty,” said Moody College Dean Jay Bernhardt. “Matthew cares deeply for our school and our students, and we are thrilled that he shares his time and talent to help prepare the next generation of media leaders and innovators.”

He keeps getting older, but the college girls are always the same age.

Honorary Professor might have been more suitable? Must be way too ‘old school’ to think that a professorial appointment requires a PhD.
Ah well, liberal arts should always remain engagingly liberal I suppose.