U. Michigan Accused of Attempting to Out Gay Student Suing Over Alleged Abuse by Prof

U. Michigan Accused of Attempting to Out Gay Student Suing Over Alleged Abuse by Prof 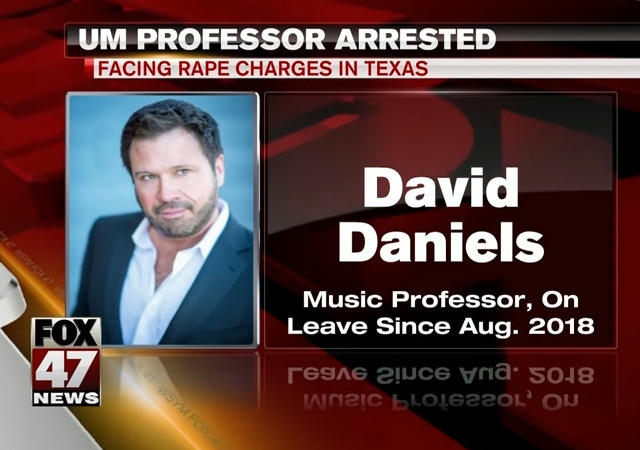 A grad student at the University of Michigan claimed that he was sexually harassed and abused by a professor. He sued the school for failing to act and now the school is being accused of using the student’s sexuality against him.

A federal court should bar University of Michigan lawyers from going after the sexual history of a student suing the school for not stepping in when a professor allegedly sexual harassed and assaulted him, a new court filing says.

Andrew Lipian filed the suit in 2018, alleging that while he was a student at U-M’s School of Music, Theatre & Dance between fall 2016 and August 2018, he was sexually harassed and assaulted by David Daniels, a tenured professor who is openly gay. The lawsuit also alleges the university knew for years of Daniels’ sexually harassing behavior and did nothing. Lipian graduated from U-M in May.

Daniels has denied the allegations.

“The University clearly seeks to defend this case by incorrectly asserting that Plaintiff consented to Daniels’ disgusting overtures and acts, and that this consent will be proven if Plaintiff ‘has kissed another man on the lips,'” attorney Deborah Gordon wrote in the filing. “In addition to ignoring well-settled law rejecting this theory, Defendant is blatantly playing on harmful stereotypes about the LGBTQ+ community equating same-sex relationships with indiscriminate promiscuity.

The line of questioning the student was submitted to is rather surprising:

According to the most recent filing, U-M lawyers asked Lipian a series of questions during an early July deposition about his sexual history, including:

In a related story, Professor Daniels and his husband Scott Walters are facing charges in another case. A singer claims he was drugged and raped by the couple after a concert.

Victoria Albert reported at the Daily Beast in January:

Famed opera star David Daniels and his husband, Scott Walters, were arrested Tuesday on sexual-assault charges, according to a Wednesday report from The New York Daily News. The pair were arrested separately, and could be extradited to Texas to stand trial over the charges.

Daniels and Walters were accused this August by an up-and-coming singer, who claims that the duo drugged him and raped him after they invited the then 23-year-old back to their apartment in 2010. “I was sore and I didn’t know why. I made my way to the bathroom to figure out why I hurt,” Samuel Schultz said in the police report cited by the News. “I was bleeding from the rectum. I became numb. I was paralyzed with fear. What had happened? How could I escape? How would I get out? Where were my clothes?”

Daniel and Walters continue to deny the allegations. Their lawyer told the News that “David and Scott are innocent of any wrongdoing.

In a final, and crazy twist to this story, Daniels and Walters were married by none other than Supreme Court Justice Ruth Bader Ginsburg.

I won’t spell out her name.

“David Daniels, 52, and his conductor husband Scott Walters, 37, were arrested in Michigan, where they live, on Tuesday nighthttps://t.co/ZM4fFrj7lt

That’s different because shut up.

Colleges believe strongly in left-wing orthodoxy until it’s THEIR money on the line.

The plaintiff in the civil lawsuit is a married man.

notamemberofanyorganizedpolicital in reply to Valerie. | August 2, 2019 at 2:19 pm

Is the plaintiff married to a man or a woman?

The accused is married to a man.

Oh and that pic of their marriage reminds me….

If I read this story correctly, a motion in limine has been filed in a sex harassment lawsuit, to keep the plaintiff from answering questions that go to the character of the victim.

If this were a criminal case, the motion would likely be granted. Under the model rape shield laws, neither the character of the victim, nor consent given in other instances, nor reputation, is relevant in a criminal case, unless counsel for the victim somehow opens the door to the questions. The courts have extended such laws to Federal rape cases.

If I were counsel for the plaintiff, I would argue as follows. 1) Sauce for the goose is sauce for the gander. If there is precedent that a woman would not have to answer such questions, then a man should not have to. 2) The same policy considerations underlying rape cases also apply to harassment cases. It is good policy to protect victims of alleged sexual harassment from further embarrassment so that the prospect of public testimony does not become a barrier to filing legitimate suits. Depending upon how this story became publicized, I might argue for sanctions against the school, for subverting the purpose of the victim protection laws by publicizing this matter.

In my opinion, having news articles with the plaintiff’s name connected to that series of questions is damaging, and a deterrent to others similarly situated, who contemplate vindicating their rights.

I think the female/male analogy as to criminal evidence is correct and applicable. But I suspect the questions being asked here address a particular claim in the civil complaint. Because anything less than that would invite a protective order.

Homosexuality/transsexualism is frequently a result of being subjected to aberrant behavior and/or abuse.

Making homosexuals and similar eligible for marriage was a massive cultural mistake, which I hope is remedied in the next 10 years.

Reversing it would be a step forward towards safety for all children.

What 1930s literature did you pull that from? For decades such “theories” have been unsupported by studies. There are stronger correlations to things like hormonal and antibody events in the the womb, to pick one avenue, than some behavioral event. Long ago, mental health researchers found that being subjected to certain social factors (such as abuse, etc.) did not explain homosexuality with any statistical confidence. Meaning, there were other underlying physiological indicators impacting outcome. Said another way, more people subjected to similar bad behavior across the age spectrum were not homosexual. Something else influences those who are. It may be true that some gay people have been subjected. But so have an equal number of non-gay people. It isn’t linked.

What is the legal theory here? If the plaintiff/student flirted with Professor Daniels’ husband or some other male, then somehow it was okay for Daniels to sexually harass the student? That makes no sense. None of the questions on that list should be allowed. The student’s conduct with other people is irrelevant to the issue of whether or not Daniels sexually harrassed him.

Maybe the plaintiff should have lodged his complaint with the school’s Title IX office. The accused would have been fired before he knew he’d even been accused, let alone by whom and for what.

I don’t know about that, the tendency in Title IX sex abuse tribunals is to protect the female and punish the male, regardless of the facts.

What if it’s male vs. male?

This couple sounds like they need to change their last name to Weinstein…..

It’s the New Age version of the “She must have been asking for it” defense.

Don’t worry. Be happy. We’ll have a gay old time.

That’s a stone-age point of view.

I don’t care if he had had sex with a man or not, it doesn’t mean that he wasn’t harassed.

It seems that Gordon is thrashing for a life preserver because she screwed her client over by putting that in there. If I were Lipian, I would be pissed AND maybe try to hide deeper in the closet.