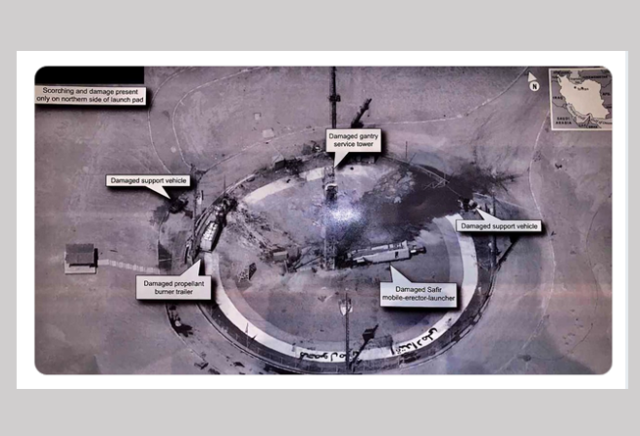 Iran has had a few critical setbacks on their quest for regional domination recently.

Then on Thursday, a commercial satellite exploded on its launch pad.

The rocket blew up on its launchpad or shortly after launch.

This is good news for the United States and regional security. Iran claims that its satellite program is peaceful and designed only to monitor the weather, but the reality is very different. Iran’s satellite program is just a cover for the regime’s development of a competent ballistic missile program. Because satellites are launched from Earth into a controlled orbit trajectory, they help Iran better understand how to get ballistic missiles onto their targeting course. smaller launch pad, and that it failed,” Dave Schmerler, a senior research associate at the Middlebury Institute told CNN.

Afterward, in perhaps the trolliest tweet in the history of Twitter, President Donald Trump shared an image of the aftermath of an accident and expressed his ‘sympathy’.

The United States of America was not involved in the catastrophic accident during final launch preparations for the Safir SLV Launch at Semnan Launch Site One in Iran. I wish Iran best wishes and good luck in determining what happened at Site One. 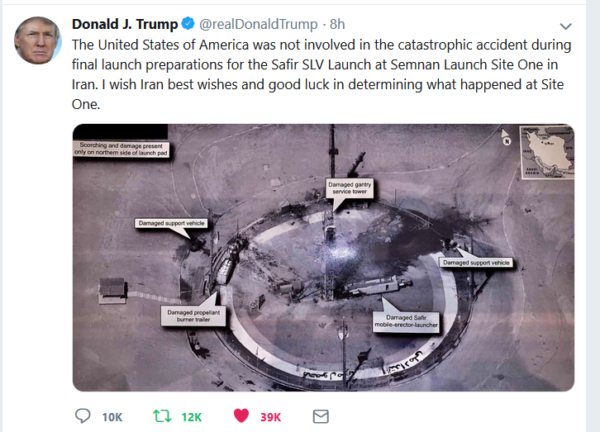 Of course, some pundits are clutching their pearls over the message.

But the image shown in the president’s tweet appears to be of far better quality, says Ankit Panda, an adjunct senior fellow at the Federation of American Scientists, who specializes in analyzing satellite imagery. “The resolution is amazingly high,” says Panda. “I would think it’s probably below well below 20 centimeters, which is much higher than anything I’ve ever seen.

…Panda says that the tweet discloses “some pretty amazing capabilities that the public simply wasn’t privy to before this.”

The Office of the Director of National Intelligence referred questions about the image to the White House, which declined to comment.

Meanwhile, it is being reported that a secret cyberattack against Iran in June wiped out a critical database used by Iran’s paramilitary arm to plot attacks against oil tankers traveling in the Persian Gulf.

Iran is still trying to recover information destroyed in the June 20 attack and restart some of the computer systems — including military communications networks — taken offline, the officials said.

Senior officials discussed the results of the strike in part to quell doubts within the Trump administration about whether the benefits of the operation outweighed the cost — lost intelligence and lost access to a critical network used by the Islamic Revolutionary Guards Corps, Iran’s paramilitary forces.

…Cyber Command has taken a more aggressive stance toward potential operations under the Trump administration, thanks to new congressional authorities and an executive order giving the Defense Department more leeway to plan and execute strikes.

The retaliatory strike by U.S. Cyber Command against the system was approved by President Trump, who that same day called off a military airstrike against Iran.

I strongly suspect that the Iranians have not recalibrated their approach to the US from how they dealt with the previous administration. Perhaps they will use these incidents as learning opportunities, for the sake of peace and the people of Iran.

Iranian President Hassan Rouhani: America Must ‘Bow Down Before’ Iran.

Rouhani suggested that he would agree to meet President Trump only if the U.S. ‘repents’ and ‘bows down’ to Iran. Ridiculous! #Iran pic.twitter.com/q26FiXb8Vf

SFN published images from a private satellite imaging company which showed evidence of that failed launch. It wasn’t ‘license plate’ close-up, but it was high quality.

notamemberofanyorganizedpolicital in reply to locomotivebreath1901. | August 31, 2019 at 4:55 pm

I read they had shorts in their electronics.

Or was that….electronics in their shorts…..
al a “underwear Bomber?”

Umar Farouk Abdulmutallab popularly referred to as the “Underwear Bomber”, is a……….

FOAF in reply to notamemberofanyorganizedpolicital. | August 31, 2019 at 5:23 pm

“electronics in their shorts”

They had a brown-out in their shorts.

Iranian incompetence, probably a consequence of killing off their best and brightest after revolution. We should have arranged for a nuclear accident early on, it is not too late.

We had “license plate” resolution during the first Iraq war, an it wasn’t secret, then. The attempt to claim that this shows DJT is careless with national secrets is stupid. Hillary had that problem, not DJT.

This really isn’t funny. As recently as the 90s China lacked the wherewithal to have guidance systems for their missiles or to put space vehicles in orbit, and they likewise were having them blow up on the launchpad or shortly after launch. That is, until Bill Clinton gave them that technology . Today China has all that technology, including a rover now on the dark side of the moon. So Iran is close.

The Loral deal raises my BP … I recall all of this. Clinton should be shot for treason. Also, he ok’d the sale of equipment to make extremely spherical ball bearings that are mandatory for accurate inertial guidance control systems. The Chinese must tell stupid American stories and laugh like hell over a few beers.

I seem to recall the hag, Madeleine Albright, letting slip that Clinton helped China to superpower status because a world with US as the lone superpower was dangerously unbalanced.

Imagine that clown obama trying to troll ANYBODY?

Trump is the master.

As long as his teleprompter was working. Otherwise he sounded like a stuttering moron. Oh wait! He IS a stuttering fucking moron.

Nice. He doesn’t actually give Iran best wishes, he just hopes somebody else will give them best wishes.

That is a photo from one of our “older” KH (Keyhole) satellites … Essentially a Hubble . 10 cm resolution. The newest gear is now being launched and imagine what a decade plus of technology can do now? Amazing stuff.

I blame all the queer electrons, blowing fuses to get even with the mullahs.