“I explained to John how miserable it would be for him and his family to deal with these people….” 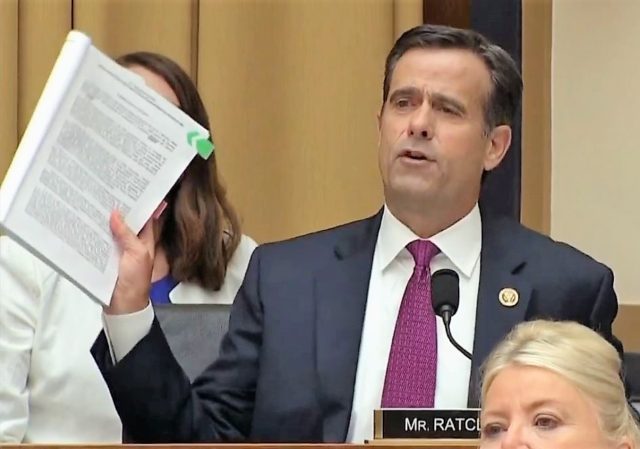 President Donald Trump rescinded Rep. John Ratcliffe’s (R-TX) nomination as director of national intelligence due to the treatment Ratcliffe has received from the mainstream media.

Our great Republican Congressman John Ratcliffe is being treated very unfairly by the LameStream Media. Rather than going through months of slander and libel, I explained to John how miserable it would be for him and his family to deal with these people….

….John has therefore decided to stay in Congress where he has done such an outstanding job representing the people of Texas, and our Country. I will be announcing my nomination for DNI shortly.

While I am and will remain very grateful to the President for his intention to nominate me as Director of National Intelligence, I am withdrawing from consideration.

I was humbled and honored that the President put his trust in me to lead our nation’s intelligence operations and remain convinced that when confirmed, I would have done so with the objectivity, fairness and integrity that our intelligence agencies need and deserve.

However, I do not wish for a national security and intelligence debate surrounding my confirmation, however untrue, to become a purely political and partisan issue. The country we all love deserves that it be treated as an American issue.

Accordingly, I have asked the President to nominate someone other than me for this position.

The mainstream media has taken a tough stance with most of Trump’s nominations. I would not have a problem with this if they took the same approach with President Barack Obama’s nominations.

The media went right to work once Trump nominated Ratcliffe. The Washington Post discovered an error on Ratcliffe’s congressional website. He claimed, “as a U.S. Attorney, I arrested over 300 illegal immigrants in a single day.” The data showed authorities only arrested 45 undocumented workers on that day in 2008.

I blame the Senate. If they had the votes, I believe Trump would have stuck with him. I hope the next nominee won’t prohibit the truth from coming out.

Ray, I downvoted you. Reflecting more on it, I may be mistaken and you may be correct. For example, John Isakson of Georgia, R, has been hospitalized again recently, and won’t be able to return to the Senate until after recess. He’s one of those that wants to go out on a stretcher.

Trump may not have had the votes. To say that about a GOPe-controlled senate makes me disgusted.

And if John Isakson was a statesman, he’d leave the senate. But no, there’s something rarified in that senate air, and they all crave to keep breathing it. . . .

I blame the RINOs on the SSCI. Yeah Sen. Burr, I’m talking about YOU!

WE need the best and brightest not the most approved by the propaganda machine.

Giving a veto to those opposed to Trump means the swamp can NEVER be drained.

Giving in, clearly an error.

I can respect Ratcliffe’s decision to spare his family months of smears (and likely attempts by the Left to kill or injure them).

But this will only encourage the Left to be even more violent and intolerant in the future, since it paid off handsomely this time.

They need to be B slapped over things like this. There needs to be accountability for such actions. For example, we all know that there are plenty of corrupt left leaning politicians, so how about having indictments ready to roll out, say within a week of this kind of event one of those politicians finds themselves in a shit storm.

And there are other options, like killing discretionary funding to key districts.

Balitmore is a good place to start, why do we keep pouring money down city ratholes?

How about LTG Michael Flynn?

I see a couple of possibilities, but the MSM doesn’t figure into any of them in any important way. Ergo, our carnivorous press is an excuse; the real action is elsewhere, most likely the Senate. I’d wait for further developments before getting too torqued up over this.

Wonder how Tim Scott and Lindsay Graham felt about him?

This is on Trump. He should have nominated an intelligent intelligence professional who would resist telling Trump what he wanted to hear, or weaponize the Intelligence Community. You know, someone like James Clapper, or maybe John Brennan.

You really should have put the sarcasm tag on that- some here might take that seriously.

Well, you’re right that neither Clapper nor Brennan would have told Trump what he wanted to hear…

I guess I needed that /sarc tag after all.

You have to read to the end to realize…

My friend said to tell you I’m he’s sorry for the too quick downvote..

I would prefer that Trump not nominate Republicans who are in Congress. We need to keep them in Congress, and not let their seats go over to Democrats (as in the case of Jeff Sessions). Nominate people who have already left Congress, or non-politicians.

Senator Richard Burr, head of the Senate Committee on Intelligence, follows the guidance of Senator Mark Warner who has yet to close the committee’s Russian Collusion investigation.

McConnell, who is responsible for all committee assignments, has established pro forma Senate hearings throughout the Senate’s summer recess.

There will be no recess appointments allowed. It would appear that McConnell has all the bases covered.

Staying in session is now the norm. Besides, even if McConnell wanted to break that, the senate can’t adjourn without the house’s permission.

Both need each others consent, just to clarify.

But they can adjourn for 3 days without consent, so the senate could if it wished for any 3 day period. McConnell could if he wished.

Stop blaming the worthless commie democrats for this.

It is entirely a republican problem.

Burr is a fool and a stooge. He does not want to cure the corruption, he wants to be part of it.

Burr is a corrupt worthless POS. He IS part of it.

BTW, Rod Rosenstein has endorsed the idea of Sue Gordon for the post. I can’t believe he’s not been perp-walked, instead of strutting around tell us who he approves of for public positions.

Not winning. If you pay the Danegeld you never get rid of the Dane. DO NOT PAY THE DANE! Never give in to their blackmail.

I hope they had other reasons, like the Congressional seat not being 100% certain.

I think Ratcliffe had the creds and tenacity to be a good AG, but I remember thinking he would be out of his element as DNI. If at some point Pompeo decides to move on, Ratcliffe might be a good fit to replace him. I understand why Trump picked him (based on his performance at the hearing), but it was not to be.

Ratcliffe is just another Swamp creature. Just another Gowdy, all talk, no action.

On the same day McCabe was fired, both Ratcliffe and Gowdy gave interviews dressed in their purple ties. Purple, the color used by swamp creatures to send a message pledging their allegiance to the Uniparty.