President Trump: “They have not treated the UK very well. (…) We are going to see if we can work something out.” 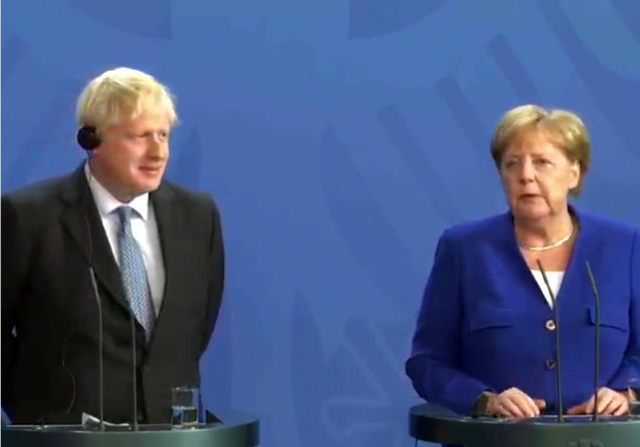 Ahead of his European trip, President Donald Trump has supported British Prime Minister Boris Johnson as he tries to negotiate a withdrawal agreement with the European Union. “That’s a very tough bargain they are driving, the European Union. We are going to see if we can work something out,” President Trump said on Wednesday. The U.S. President will be in France this weekend to attend the annual Group of Seven (G-7) summit.

The comment came as Prime Minister Johnson met German Chancellor Angela Merkel and French President Emmanuel Macron to find a solution to the Brexit impasse. With just 70 days to the October 31 deadline, Germany and France are refusing to renegotiate the Brexit terms offered by the EU. In case the EU fails to offer a better deal, Prime Minister Johnson has threatened a no-deal Brexit, ending existing trade and immigration agreements between London and Brussels.

Chancellor Merkel refused to offer any assurance to the visiting British Prime Minister on Wednesday. Today, French President reiterated a similar position while receiving premier Johnson at the Champs-Élysées. Germany and France are offering a united front to force Britain to accept the terms offered by the EU. “Have no doubt that the French and German positions — and elsewhere — are the same. There’s not the thickness of a cigarette paper between us,” a French presidency staffer confirmed.

On his first foreign trip since winning the premiership a month ago, Johnson warned German Chancellor Angela Merkel and Macron that they will face a potentially disorderly no-deal Brexit on Oct. 31 unless the European Union does a new deal.

Britain’s destiny lay in Johnson’s hands alone, Macron said, adding that while no-deal was not a scenario desired by the EU the bloc would be ready for such an eventuality.

“I want to be very clear: in the month ahead, we will not find a new withdrawal agreement that deviates far from the original,” the French leader said in the Elysee Palace courtyard alongside Johnson.

But he extended a hand to Johnson, adding: “Nobody is going to wait until Oct. 31 without trying to find a good solution.”

Johnson told Macron that he wanted a Brexit deal and believed it was still possible to reach one in time for the Oct. 31 deadline.

The EU is not the only one playing tough. Prime Johnson has vowed to take back control of the country’s immigration system — currently restrained by EU regulations — and ban criminal migrants from entering the UK from the EU countries after the October 31 deadline. “Boris Johnson will change the rules to allow UK border officials to turn any EU criminals who have previously been jailed for a year or more, sweeping away EU regulations that allowed any EU national entry unless they were a threat to public safety,” London-based Daily Telegraph reported on Monday quoting a spokeswoman for the Prime Minister.

As the UK enters the final phase of leaving the EU after three years of tenuous negotiations, President Trump has once again offered support to bolster London’s position. Last week, President Trump dispatched the U.S. national security adviser, John Bolton, to London to reiterate the U.S. commitment to a comprehensive U.S.-UK trade deal. “The main purpose of the visit really is to convey President Trump’s desire to see a successful exit from the European Union for the United Kingdom on October 31, to offer to be of help in any way that we can and to express his hope we can have a fully comprehensive bilateral trade agreement with the United Kingdom as soon as possible,” Bolton said.

With Germany and France refusing to budge, and Johnson-led government committed to leaving the EU in ten weeks time, a no-deal Brexit looks likelier than ever. Despite media painting a nightmare scenario and the EU leaders refusing to publicly accept the reality, the EU governments and European corporate sector are gearing up for a no-deal Brexit.

The EU has used every trick in the book to stall the Brexit, but it can’t keep a country the size of Britain within the bloc against the wishes of its people and the elected government.

Sadly there are a lot of people within the UK who are more than happy to support undermining BREXIT at every opportunity. A lot of these people are within Westminster.

According to Das Wiki, “Article 50 of the Treaty on European Union (TEU) states that “Any Member State may decide to withdraw from the Union in accordance with its own constitutional requirements”.

Perhaps Merkel should acquaint herself with it.

Near as I can tell, France, the Netherlands, Austria, Finland and Hungary all have growing ‘exit’ movements. Poland, too. Whether it will happen is another tale, but if Great Britain successfully extricates itself from its incestuous relationship with Mutter Merkel, I dare say many of those other dominoes on the continent will fall in fast succession.

“With just 70 days to the October 31 deadline, Germany and France are refusing to renegotiate the Brexit terms offered by the EU.”

Oh, good grief. A middle finger salute, Boris, followed by ‘No Deal’ Brexit. Just do it.

funny, a buddy of mine wrote a song on the salute subject…

Merkel and lap dog Macron play hard ass with PM Johnson and PDJT and Nov. 1 a bilateral US/UK interim trade agreement goes into effect and US put a 25% tariff on EU autos, buses and trucks, for starters. PDJT is looking for ant excuse to hammer the EU.

The only problem with that is that he would need either a majority in both houses, or 2/3 of the senate. I don’t think the president has no authority to implement such a deal on his own, even on an interim basis. (If he does, that’s wonderful, let him do this. But I’ve never heard of such an authority.)

I have read that the President has statutory authority to engage in temporary trade agreements lasting up to ten years without consent of Congress. I don’t have a citation.

Oh, OK. It could be. And if it is, then your proposal is exactly right.

The UK – always there when they need us/US.

There was NEVER going to be a deal. Every member of the EU can veto any deal. And, several would veto a deal because they hate the UK.

POTUS is being smart politically and having fun muddying the water for the EU(GER/FR).

The U.S. can offer quite a bit better terms to GBR post brexit than the EU. Oversimplified, straight bilateral trade agreement between US and GBR. Possibly, this increases pressure on Canada to bring USMCA up for a vote which in turn almost obligate the D to pass USMCA once they start hearing from the various industrial and agricultural groups back home. The D can’t use Canadian inaction as an excuse anymore.

Together a bilateral deal with GBR plus the benefits to that agreement from USMCA will make EU current tariff and trade regime untenable long term. That has the potential to split off the EU into it’s constituent parts of not break it entirely. That is why the EU heavyweights are fighting brexit tooth and nail.

Norris Johnson has been a bit wishy washy on a hard brexit in the past but this week’s G7 meeting with support from POTUS may harden his resolve. Not to mention that GBR will undoubtedly refuse to pay the EU an exit fee of some $40 billion if due to EU intransigence a hard brexit occurs.

This is a way larger issue than has been widely reported.

I’m just afraid the Dems will refuse to pass a US/UK agreement, especially if the EU insists on closing the UK/Ireland border. (People are trying to make out as if closing the border would be the UK’s doing, but it wouldn’t. Even after a hard Brexit, the EU could choose to keep the border open anyway. The UK has no intention of closing it, so if the EU doesn’t it will remain open.)

Yeah D being obstructive is the issue, but my point was that POTUS is ‘reversing the hold’: think in terms of Judo. The same is true with the EU.

If POTUS can reassure the PM that there is a concrete deal with the U.S. awaiting the trigger of brexit that should be enough. Mechanically the moment brexit occurs would be a return to WTO regime for GBR. So a deal already exists with GBR and US operating under WTO regime at most favored nation status. Both U.S. and GBR remain WTO members to the best of my recollection.

I think the case could be made that POTUS has sufficient authority under the unique and potentially harmful economic circumstances, to implement the basic 4 corners of an interim trade deal for say six months while pending Senate approval of the finalized negotiated bilateral deal. What would be the alternative? Stop trading with GBR until a formal trade treaty is approved by the Senate?

Keep in mind that however much the D want to thwart Trump they still have elections to compete in. Their constituents are not going to tolerate posturing just to feed TDS at the expense of their economic interests. At least I doubt it.

Hey UK PM, do a “hard brexit” and have a GREAT TRADE DEAL in place immediately – with the USA!

I’m really, really hoping Johnson succeeds, but UK politics are insanely complicated and volatile. Prime Minister or not, he can’t just strong arm Parliament into doing what he wants. He has a teeny-tiny fingernail of a majority of MPs supporting (nominally, anyway) him, and we’re talking about politicians here. They’re egotistical and risk-averse. The Remainers and the EU are doing their best to make Brexit look as painful and scary as possible and he has to herd 600+ cats toward it by lobbing firecrackers at their asses and promising there’ll be tuna on the other side.

Great description of the Parliamentary process. I am so stealing that.