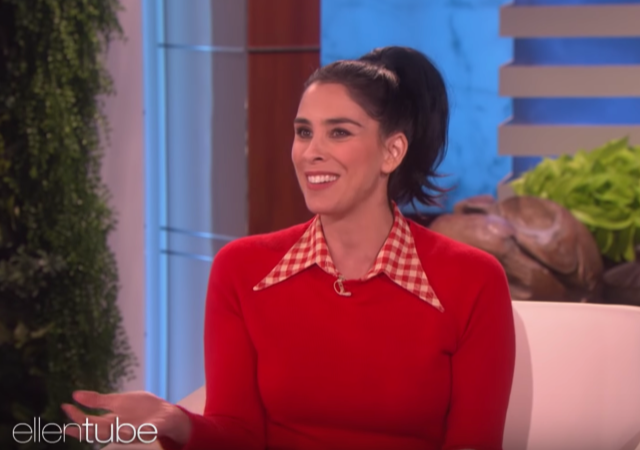 Liberal comedian Sarah Silverman said on “The Bill Simmons Podcast” she recently lost a role in a movie after the filmmakers discovered a picture of her in blackface from 2007. From The Hollywood Reporter:

“I recently was going to do a movie, a sweet part, then at 11 p.m. the night before they fired me because they saw a picture of me in blackface from that episode. I didn’t fight it,” Silverman shared with Simmons. She said that though she understood, she’s not that person anymore: “They hired someone else who is wonderful but who has never stuck their neck out. It was so disheartening. It just made me real real sad, because I really kind of devoted my life to making it right.”

Silverman is no stranger to being outspoken, and she and Simmons discussed how the “canceled culture” has caused comedy to become a “dangerous place” for those who have made many mistakes in their past.

She added: “It’s like, if you’re not on board, if you say the wrong thing, if you had a tweet once … everyone is, like, throwing the first stone. It’s so odd. It’s a perversion. … It’s really, ‘Look how righteous I am and now I’m going to press refresh all day long to see how many likes I get in my righteousness.'”

I agree with Sarah. The outrage culture numbs my brain because people on both sides view it as a way to take down people they do not like.

People make mistakes. People can change. If they genuinely do then they deserve a second chance. Silverman does not think everyone deserves a second chance:

“As I draw lines in the sand — and I wish for other people on the left to do this too — you have to ask yourself, ‘Would I want this person to be changed, or do I secretly want them to stay what I deem as wrong, so I can point to … myself as right?” she said. “There’s so much to be genuinely outraged by, but you have to say, ‘Is the action I’m taking here creating change or creating further division?’ ”

Every person deserves a chance to change and better themselves. They deserve another chance and not have their lives destroyed by a past mistake no matter how they lean on the political spectrum.

However, hypocrisy lands everywhere, including in “canceled culture.” If past actions destroy one person’s life, but not another, then what is the point? Silverman lost a movie role that sounded prominent and one that could boost her career over an old photo.

Yet Democratic Virginia Gov. Ralph Northam remains in office. Northam admitted he appeared in a photo that shows one man in blackface and the other in a KKK outfit from his college yearbook.

Then he said one of the men in the photo is not him, but admitted he wore blackface in another incident. Northam held an awkward press conference with his wife where he insisted he would not resign from his post despite pressure from fellow Democrats.

What? Sarah didn’t point out that:

There is no way that I could possibly care less that this progressive shill got caught in the gears of the woke outrage machine. Tough shit.

I guess if Sir Laurence Olivier were still alive, he wouldn’t be hired for any roles in movies after his politically incorrect appearance in blackface as Othello in the 1965 film of the Shakespeare play. They would probably rescind his Oscar nomination for “Best Actor in a Leading Role” as well.

Acting used to emphasize taking on a role different from oneself. A good actor was one who could play a man, a woman, any ethnicity, and any sexual preference. Now, actors aren’t supposed to play any character that doesn’t represent their own characteristics. Anything else is “cultural appropriation.”

That is only part of why there is a lack of talent in Hollywood. The PC, leftist bubble world is busy making them carbon copies of each other, so long as they are sexually deviant enough, and do the causes bit, then they are given parts. Stray from the National Socialists and you find parts drying up all over the place.

Much funnier than any of her “jokes.”

Take them all done

she helped make the machine that led to this.

I’m so upset for Sarah. I might be able to care less but that would require actually caring. Is there negative levels of caring?

“…people on both sides view it as a way to take down people they do not like.”

I don’t think that’s why they do it. I suspect it has more to do with people who feel small and insignificant who want to feel big and powerful.

In this case the producers did it for fear of the outrage mob.

Northam is still in office because the guy below had a sex harassment thing in his past, the buy below that had a blackface incident too, and maybe (not sure about this part) the person below that was Republican so we obviously can’t go there …

There was never a smidgen of forgiveness from anyone to anyone else there. The black guy in 2nd place would have loved to push out the Gov on a blackface rap, except he fell foul of #metoo. And he can never be elected, so that would be only way he’d ever be governor.

“I think it’s really scary and it’s a very odd thing that it’s invaded the left primarily and the right will mimic it,” Silverman said …

so even though the right hasn’t copied it, because maybe we’re not jerks like that, she just says “the right will mimic it” making the Dems’ behavior scary because we might mimic it.

Change is progressive (i.e. monotonic) and overrated, even counterproductive. Repent and sin no more. Principles matter.

Is it possible to shed less than zero tears for this piece of garbage?

Vile witch hunter discovered to be the witch she hunted.

Could never, ever be she’s a no talent hack….
neverrrrrrrrrr……..

Feelings… nothing more than feelings…

Which is an atmosphere that you help create and grow, so shut up and enjoy the suck, Sarah.

See that? I broke out the world’s smallest violin to play a sad tune for her.

“Entitled arrogant liberal who demanded new rules is shocked that rules are being applied to her”.

(whacks side of box)

(whacks side of box)

I’m throwing a red flag on this one. Loss of 2A rights. Complain about it and you will be on the “suspected domestic terrorist” list. With Fredo (if you don’t know what I’m talking about, you will… soon).

Glad to see you get what’s coming to you. Altho if it were me and many others we’d think nothing of it because sticks and stones aren’t black face or taboo words.

But that’s all on you lefties. It comes with the politics you all built and nurtured for your own selfish purposes.

Aren’t we assuming facts not in evidence here. She reports that she was refused a role for past behavior, but neither names role nor person who replaced her. Hmmmmm. Sounds like some PR work being done to pave the way for the “redemption” of the 100+ dem leaders who were in fragging range when the #metoo grenade exploded. At this point I would suggest we really make her suffer by going after boyfriend Jimmy Kimmel for his part in “The Man Show,” but, it was some really funny stuff.

Or, she is an attention whore who hasn’t gotten any recently.

She’s lying. No way that this movie even exists.

She’s just asking for sympathy, because she spent the last week successfully trying to get a Christian pastor in the middle of nowhere fired for the offense of daring to criticize her “Jesus is Magic” comedy special.

“Comedy” and this fool are hardly synonymous.

She’s about as funny as any of the lot of formulamatic, angry female democrat hacks hogging microphones at comedy clubs.