“I believe that it is our duty to vote as American citizens and it would be wrong not to exercise our political voice.” 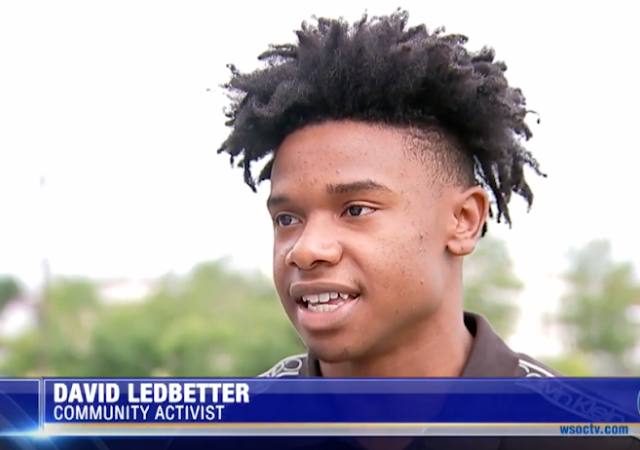 David Ledbetter, 17, used the freakout over Popeyes new sandwich as an opportunity to register people to vote.

The North Carolina teen cannot vote, but he saw it as a chance to bring young people into politics.

“I decided to register people to vote after I saw there was a lack of young people politically involved,” Ledbetter said.

“I believe that it is our duty to vote as American citizens and it would be wrong not to exercise our political voice,” Ledbetter said.

Popeyes all over the country have faced long lines as people scramble to try their new chicken sandwich. Some stores have run out of the new sought out delicacy.

Today we were registering individuals to vote while they were waiting in line to try the @popeyeslouisianakitchen chicken sandwich. Make sure you’re registered to vote!✊??? @sneed4schoolboard

Ledbetter does not have many pictures on his Instagram account, but the few shows him volunteering and trying to better his community.

Good on Ledbetter for taking advantage of the long Popeyes lines!

Next up registering comatose patients in nursing homes. The duties of a citizen run far deeper than rote voting for a Democrat because your friends do it.

notamemberofanyorganizedpolicital in reply to dystopia. | August 28, 2019 at 6:32 pm

While these comatose, vacuous lumps are being registered, I’m sure somebody is giving them helpful instructions on how to vote, too.

The DNC beat him to the graveyards.

Let’s face it, the GOP and we conservatives do not have the gumption to go out and do illegal things to win elections. CA is a good example of a state effort to disenfranchise the entire Republican party from its state. What do we do about it? ABSOLUTELY NOTHING! But do we do the same things in red states? Of course not! We allow scum like Stacy Abrams to call our fair and honest elections a fraud. In blue states that never happens because they always find “Uncounted” ballots at the last minute. When we ever learn? Are you starting to feel like the frog in the pot of lukewarm water?

Hopefully there will be some enterprising youth who provides the same service at Chick-fil-A; in fact, maybe Chick-fil-A can reward its employees for participating in a genuine ‘ Get Out The Vote’ effort.

I can only guess what his nickname is.

Getting a captive audience to register is one thing, getting them to the polls is another.

Oh, that’s not a problem. They’ll all vote absentee. Or they’ll “show up” at the polls right “before” closing, if you know what I mean.

It is wrong to malign fried chicken with racist hyphenated Africans. I love Popeye’s and KFC though I seldom squander funds on such delights when I can cook my own for about a third of the fast food price.

I almost agree with you. My steaks, italian food, pretty much anything is better than what I can get in a restaurant. KFC or popeyes fried chicken is a problem because your only cooking a few pieces and your left with a large pot of used grease. Seems wasteful to dump it or burn it off in the yard and you cant dump it in the sink. Also I can never get it to turn out quite right.
An offshore cook showed me to soak chicken in brine overnight in the fridge to get blood out though.

Brining poultry and pork keeps the moisture and flavor in, it is pariculary useful for turkeys.

Understand about having to deal with used cooking oil for small batches of food. We use a Fry Baby and a Fry Daddy when the cravings come.

People can figure out how to wait in line for a chicken sandwich simply because everybody else is doing it. But they can’t figure out for themselves how to register to vote. Sad state of the electorate in today’s culture.

Minority outreach is not just for AME churches anymore.

IMO registering to vote should be just as easy as getting your Conceal Carry Permit.

“Democracy” only works if the entire voter base is qualified morally, intellectually, and economically. The prerequisite to achieve such is “Meritocracy.” The USSA would have to be recycled to achieve that, starting with the removal of the silly, vain, demonstrably false, hippie notion that “all are created equal.” Regardless of demographic, it can be predicted with actuarial precision that only 10% of human adults will ever be self-sustaining. The other 90% need pepetual “help.” Domesticated cats have a better adaptability rate than humans. Ergo, the world population can really support only one viable, securable Meritocracy, where all of the 10% non-useless humans around the world would coalesce geographically on the singularly relevant basis of NOT sucking!

Seems to me that we want people voting who care enough about the issues to get up off their duff and register themselves, and the passive uninvolved uncaring voter not so much.