Makes celebration of skill and sportsmanship about himself 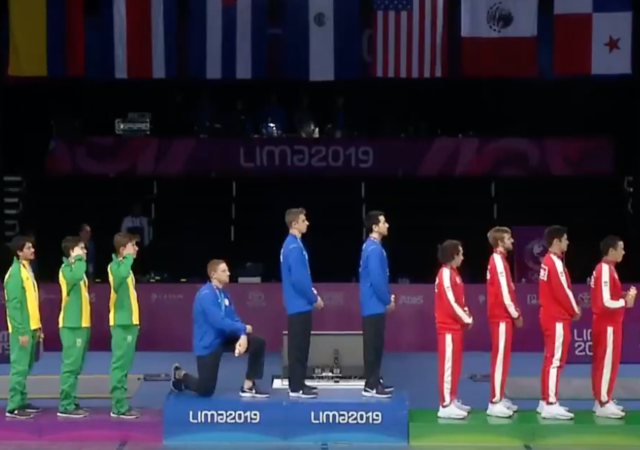 So bold. So brave!

During the medal ceremony at the Pan Am Games in Lima, Peru, Fencer Race Imboden kneeled during the playing of American National Anthem. Imboden was protesting, “racism, gun control, mistreatment of immigrants and President Donald Trump,” reports CNN.

We must call for change.
This week I am honored to represent Team USA at the Pan Am Games, taking home Gold and Bronze. My pride however has been cut short by the multiple shortcomings of the country I hold so dear to my heart. Racism, Gun Control, mistreatment of immigrants, pic.twitter.com/deCOKaHQI9

and a president who spreads hate are at the top of a long list.
I chose to sacrifie my moment today at the top of the podium to call attention to issues that I believe need to be addressed. I encourage others to please use your platforms for empowerment and change.

Making a celebration of skill and sportsmanship about yourself is not a “sacrifice,” pal.

Imboden, 26, was ranked as the world’s second-best in the foil event, and won a bronze medal in the men’s individual foil on Tuesday. On Friday, he helped the US win gold in the men’s foil team event, and then took a knee on the podium as the Star Spangled Banner played.

Kick the drama queen off the team.

He’s trans-social. A rebel with a cause and without a clue. #NoLabels #NoJudgment

Let him pay the price: while nike may throw money his way, we shun him and anyone who pays him.

notamemberofanyorganizedpolicital in reply to TheFineReport.com. | August 12, 2019 at 3:06 pm

Everyone knows “Bronze” isn’t worth anything!

What a turd. If he’s so ashamed of America, why does he compete as an American?

She doesnt want a man

But Race Imboden likely does want a man.

No one ever would have heard of this clown had he not protested. Take the buttons off the ends of the foils and fencing might become interesting. Otherwise, yawn.

Fencers can be heterosexual? Real fencers put up miles or barbed wire/

I think it generally is a heterosexual sport unlike, say, men’s figure skating.

Naah, the poor guy just kneeled to tie his shoe, only to discover it was a velcro ribbon.

That is a lie. He only honors himself in his own mind.

notamemberofanyorganizedpolicital in reply to TX-rifraph. | August 12, 2019 at 3:08 pm

He’s just like Hillary – warmed over (fill in the blank).

I will use my platform to protest the government-promoted violence of gun-free zones. Time to hold Imboden and others like him for the deaths they have caused through gun control.

Heh yeah maybe he’s just protesting that in our country, a foil isn’t a dominant weapon. As a foil expert, he’s oppressed by our gun laws.

With that long list of things wrong with the USA it should not be too difficult for him to find a place that better fit his idea “right”. He seems not to understand that there are many, many people who are OK with things here, and might even think his “problems” do not exist outside his mushy mind. But he will take our money and prestige to advance his personal goal of international fencing honors. Talk about biting the hand that feeds you.

Wait until people start getting stabbed and the call goes up for sword control. He will squeal like a pig caught under the fence.

For the record, I, too, have a problem with “gun control”: as I age I find that ten-ring becomes more agile.

notamemberofanyorganizedpolicital in reply to amatuerwrangler. | August 12, 2019 at 3:10 pm

RE: “…there are many, many people who are OK with things here…”

Yes, such as the Hong Kong protestors wanting liberty!

I laid off for a year and forgot all my bad habits and am doing better. LOL!

This former collegiate fencer is furious. We labored in obscurity and then when US Fencing is finally starting to show some results this guy beclouds himself and drags down the sport. Sheesh. His Dad is a Bernie Bro so I guess the apple doesn’t fall far from the tree.

notamemberofanyorganizedpolicital in reply to katasuburi. | August 12, 2019 at 3:12 pm

Thanks for the daddy issues info.

No offense to apples, but now instead of saying apples, I use:
“The Ugli Fruit doesn’t fall far from the Ugli Tree.)

Ditto from another former collegiate saber fencer….from waaaay back before it was electrified, with bouts that included four judges who nimbly scuttled back and forth to detect and announce touches for the Director’s adjudication. (Not just flicking smacks with any part of the blade counted, as now, but the judges/Director ignored side-of-the-blade hits and only counted “valid” bottom and top forward 1/3 of the blade cutting edge hits, plus the ever-popular point thrust.)

I agree, this posturing drama queen a spoiled little narcissistic prima-donna brat who deserves a good swift side-of-the-blade whack to his backside.

Anyone that disrespects the USA should be immediately kicked of the USA team. If they want to protest let them use their own platform and dime.

What a transparently self-aggrandizing and self-congratulatory display of contemptible vanity/faux-virtue-signaling. Leftists’ innate ingrate, spoiled-brat sensibility vis-a-vis the U.S.A. and the blessings/fruits of Liberty has never been more apparent, or, more nauseating, than it is now. Contemporary Leftists now consistent of infant-ingrates possessing no modicum of appreciation for how special this nation is, when placed in historical and contemporary contexts.

With such a persistently pessimistic and negative view of the country that doesn’t allow for any pride, or, for an objective acknowledgement regarding this country’s undeniable and substantial atonement for past sins and progress made on a multitude of social issues, why would anyone take Leftist self-flagellation and histrionics seriously? Their egotistical motives are as infantile as they are transparent.

Interesting that he wasn’t so upset about all of those things to protest by not taking a slot on our National Team and take our financial support to further his participation in the sport.

notamemberofanyorganizedpolicital in reply to Recovering Lutheran. | August 12, 2019 at 3:13 pm

But that is the “issue” that should be thrown in their face non-stop.

If Americans had kneeled… Bow down before the one you serve. Just do it!

In that situation, he is representing the United States. If he so disdains the United States that he cannot represent it properly in a foreign environment, he should step down in favor of someone who can. As it is, he has breached faith with the American people.

It’s not like fencing will bring him fame. He took his only chance to get some attention. Now he can get on with losing elsewhere in life.

I would rather the USA lose this event than allow this guy to represent us in Tokyo.

So why is he still on the US team?

As a protest, we Patriots should all agree amongst ourselves that when the next need for a professional fencer arises, none of us will consider him for the job. I have already instructed my H&R department to strike his name from our possible future swordsmen.

If the fencing association or whatever it is had any courage, they’d strip him of the medal, kick him off the team and delete all mention of his name in their association.
And the US amateur teams should all be told if they want to get political the same happens to them.

He clearly violated the terms of his participation agreement. He should be stripped of his medal. His team should also be sanctioned (maybe banned from the next competition). A political grandstanding has a time and a place; there needs to be a very clear message that these type of events is neither of those.