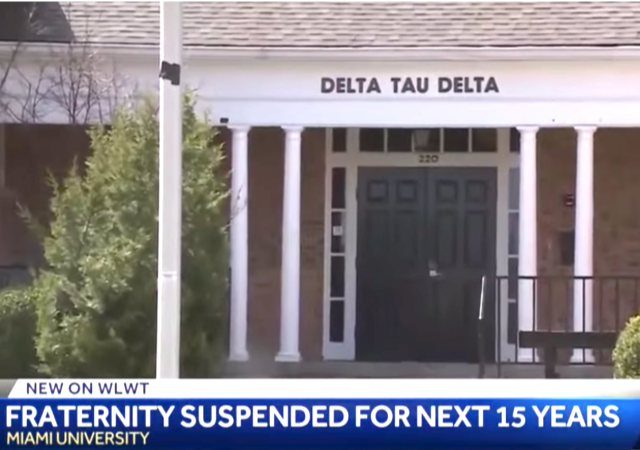 Miami University in Ohio has banned the Delta Tau Delta for 15 years after an alleged hazing incident that took place the big/little reveal. After reviewing the 33-page report, the university described it as “among the worst kind of hazing possible.”

The scathing sanctions match the tone of Miami University President Gregory Crawford’s comments shortly after the allegations surfaced, when he called the incident “brutal and deplorable.”

As of Wednesday, no criminal charges have been filed, but Oxford police said the prosecutor is still reviewing the case and charges are still possible.

The pledge who shared his story with officials said he was blindfolded along with 24 other pledges and led to the “war room” during a March 16 evening event at the fraternity house. He said while blindfolded, he was thrown to the ground, slapped in the face, had liquor poured on him and was forced to do pushups while several men kicked him on his sides.

The report goes on to say seven men took turns hitting him with a paddle that had some sort of spikes and grooves on it. At least one brother hit him after his pants were down because “it’s tradition,” the report said.

The victim claimed he asked to leave but was not allowed.

The pledge said he was forced to drink a six-pack of Smirnoff Ice and a fifth of Crown Royal during a “chug until you puke” game. He said he threw up multiple times and was told to keep drinking.

At the end of the night, he said he was asked to smoke a joint and told it would help numb some of his pain. The pledge said at that point, he asked to go back to his dorm room and his “big” took him there, telling the pledge’s girlfriend that he was fine and just needed to sleep.

Within five minutes of being back at his room, the pledge said: “Call 911. I feel like I’m going to die.”

He was taken by ambulance to the hospital with a blood alcohol content of .231, nearly three times the legal limit.

As documented in the university’s report, group chat messages sent to pledges the day of the mandatory event warned them, “The worst is yet to come” and “You guys don’t want to drink any alcohol before you get here tonight.”

After the incident, the victim received a text message from a fraternity brother saying, “Please do not say anything that would threaten the future of the fraternity” and another that read, “It’s the point of it to turn boys into men. It f****** sucks but it pays off in the end and you don’t appreciate it until you’re a little older because I hated it but now I have respect for it.”

Allowing a bunch of idiots to treat you like a piece of worthless garbage.

I can think of much worse hazing, particularly among sororities and women forcing women to do certain acts, but this is also not excusable.

“He was taken by ambulance to the hospital with a blood alcohol content of .231, nearly three times the legal limit.”

His blood alcohol level might have been nearly three times the legal limit for DRIVING, but he was not driving, and to the best of my knowledge, there is no legal limit for lying passed out in your bed. Very sloppy reporting.

I never understood the reason for joining a frat in the first place. Aside from getting drunk, loud parties, sexual goings-on, and bragging that one is affiliated with one or another combination of Greek letters.