“In all forensic investigations, all information must be synthesized to determine the cause and manner of death.” 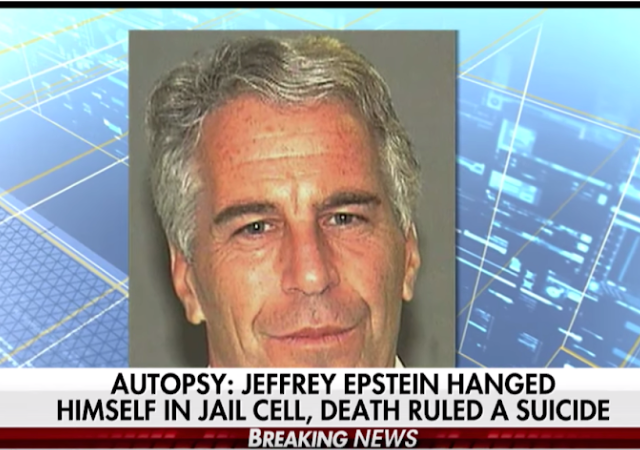 “After careful review of all investigative information, including complete autopsy findings, the determination on the death of Jeffrey Epstein is below — Cause: Hanging. Manner: Suicide.”

Anonymous sources told The Washington Post she gave her findings to law enforcement officials. They did not provide more information.

He was placed on suicide watch last month after he was found on the floor of his cell with bruising on his neck. However, multiple reports say Epstein was taken off suicide watch days later.

Epstein’s death caused public and official outrage over how such a high-profile prisoner could have gone unmonitored. His death led to a torrent of conspiracy theories focusing on the high-profile people who moved in Epstein’s social circle, including former President Bill Clinton and President Trump.

Speculation that Epstein was murdered ramped up Thursday after The New York Times and The Washington Post reported that the autopsy found broken bones in the financier’s neck.

Chief Medical Examiner Barbara Sampson issued a statement Thursday in response to those articles, saying: “In all forensic investigations, all information must be synthesized to determine the cause and manner of death. Everything must be consistent; no single finding can be evaluated in a vacuum.”

Epstein’s lawyers refused to accept Sampson’s findings. These team announced its intention “to conduct its own independent and complete investigation.”

Officials had instructions not to leave Epstein alone and check on him every 30 minutes after an apparent suicide attempt on July 23. Fox News continued:

For his part, Attorney General William Barr said officials have uncovered “serious irregularities” at the jail. The FBI and the Justice Department’s inspector general are both investigating Epstein’s death.

Jail guards on duty the night of Epstein’s death are suspected of falsifying log entries to show they were checking on inmates every half-hour as required, The Associated Press reported, citing several people familiar with the matter. AP also reported that a guard in Epstein’s unit was working a fifth straight day of overtime, while another was working mandatory overtime.

U.S. District Judge Richard Berman, who was to preside over the criminal case against Epstein, asked the jail’s warden this week for answers about the July 23 episode in which Epstein was found injured, writing in a letter Monday that it had “never been definitively explained.”

There was no doubt this would be the official finding [regardless …].

notamemberofanyorganizedpolicital in reply to walls. | August 18, 2019 at 6:22 pm

You mean in spite of the 7 gun shot wounds to the back of the head, and the dropped business cards of “Arkancide Inc.?”

I agree with the note of caution from Dr. Dalrymple, with one caveat: He has no better idea than you or I what really happened.

A lot of people with, both means, motive, and the demonstrated inclination to accept murder as a political tool, benefit from his convenient death.

Extraordinarily superficial sophistry. Dalrymple may be a doctor, but he ain’t no logician.

While a several items certainly raise the spector of a murder, Guards asleep, falsified reports, no camera, Clinton’s mafia, etc., It would be extremely difficult for the clinton mafia or anyone else to execute the murder without gettign caught.

1) Numerous other prisoners in adjacent cells,
2) The ability to either have the murderer enter the facility to commit the murder without being detected.
3) if the murder was committed by an existing inmate, that inmate would have needed to have some connection to the person who would want him murdered. With the Clintons are scum, they dont have many of their accomplices in federal custody. Epstiens other rumored high profile/rich customers likewise dont have many people in their circle of friends in federal custody.

The other prisoners won’t say anything if they know what’s good for them, and the video of the cell almost certainly went missing to disguise the murderer. If that person is not a prisoner, they no doubt didn’t sign in, or if they did it isn’t their real name. Any proper investigation would require examining video from the rest of the prison to see who is coming and going and matching that with entry logs of visitors and guards. The determination of suicide makes that investigation impossible, at least by state officials, which is presumably the point. If the feds want to get involved they likely need to go to court, which gives the conspirators even more time to doctor or lose evidence.

“The determination of suicide makes that investigation impossible, at least by state officials, which is presumably the point. If the feds want to get involved they likely need to go to court, ”

The jail is a federal facility. The Feds are already involved. The state authorities are not involved with the exception of the NYC medical examiner who performed the autopsy. Note that the local medical examiner is the one who typically performs autopsies for the Feds.

Do you want to know who was involved? Just keep an eye on who at the prison (employees or incarcerated) dies in tragic accidents or burglaries across the next 6 months or so.

It could certainly be a suicide, but that doesn’t mean it wasn’t coerced and people weren’t bribed off.

A late-term abortion through negligence, would have diverse, democratic precedent.

And that one certainty is a disgrace.

It is a very small step from paying political agitators to harm random American voters to paying to kill a specific, dangerous person.

Meanwhile, the past administration was perfectly willing to let guns walk across our border to cartels, possibly for the motive to get gun confiscation law enacted here. Why not? They traffic in racism hoaxes, as well.

We have a political party that does not value the life of the individual, and which is willing to do physical harm to complete strangers. Are we to believe they would not kill an identified, “dangerous” individual? (Cough, cough Gaddafi) I think they’ve done that at least once. With that precedent, why not again?

Where once he was a welcome provider, handler, trafficker, with change (i.e. Trump administration overturning prosecutorial discretion) he became a liability. He may well have been Gaddafied for the sake of social progress.

Whether he was Planned or self-aborted, the Choice was both legal and ethical. Epstein was no longer viable and a clear and progressive burden to himself and his patrons.

Until we see the complete autopsy report, we really have no idea upon what the ME based her decision. The leaked information may not be accurate. That being said, if the leaked information IS accurate, then the reported position of the body, along with the claim of multiple fractures of bones in the neck, would cast doubt on this being an actual suicide. We’ll have to wait and see what all the evidence says.

it might be a good idea that she based her conclusion on what was good for the party.

Sure, it was suicide.

All the breakdowns, no need for me to repeat that long list, were just “coincidence”.

Epstein was so determined to kill himself that he took no chances. He broke his neck THEN hanged himself.

if you have evidence that is damaging to the party in a communist country the black car comes in the middle of the night to take you away.

I don’t see how any other finding is possible. The ME has to take steps to be sure she doesn’t catch something contagious from the cadaver—like, say, suicide.

I seem to recall [not 100% sure] that the same happened to the ME who conducted the Ron Brown autopsy.

The number of curious deaths related to the Vince Foster story is a veritable play book for how the Clintons operate.

As it were, I will NEVER believe the government’s findings of suicide. However, I would welcome reports of Bill & Hillary’s suicide.

The presumption is that the procedures, the protocols, which were not followed this day were observed reasonably well on all the other days.
What if this was SOP and supervision knew it?

I’m guessing that Dr. Sampson will soon be the proud owner of a lavish new lakeside summer home in the Adirondacks.

I’d feel better about the report if it was not written a month ago.
(just kidding, just kidding)

We know the autopsy report showing Epstein committed suicide is correct because Epstein signed off on the report.
(Look, we can make fun of this, right?)

I will go out on a limb and say that neither the Clintons or any Democrat bigwig have Epstein wacked. Epstein may have been murdered, but if he was it was by an inmate acting on his own. Many prisoners have been abused as children, and so many of them would hate Epstein just for that.

The question doubters need to ask is: why would Democrat’s murder Epstein? To cover up the Lolita Express and how it implicated Democrat politicians and donors? HA! Democrats have been committing crimes from small to big and getting away with them for decades. The media can be counted on to insulate any Democrat caught doing something a non-Democrat would be crucified for. From wearing blackface to being a KKK Grand Wizard to providing guns to Mexican drug cartels to spying on political opponents to rape, murder, and treason, Democrats have a history of doing what they please when they please and getting the media to cover it up. Why bother to snuff Epstein when there was zero chance any Democrat would get even five seconds of bad publicity, let along prosecuted for the rape of children?

New York City Chief Medical Examiner Dr. Barbara Sampson expressed amazement at the deceased Jeffery Epstein’s ability to simultaneously shoot himself in the back of the head with two bullets while hanging himself to to death, the latter post mortem. “Definite and determined suicide by CIA.”

and a.j. hiddell was the lone gunman