Media Deliberately Distorted Trump’s Joke About Being the ‘Chosen One’

Media Deliberately Distorted Trump’s Joke About Being the ‘Chosen One’

Trump: “I was smiling as I looked up and around. The MANY reporters with me were smiling also….And yet when I saw the reporting, CNN, MSNBC and other Fake News outlets covered it as serious news & me thinking of myself as the Messiah” 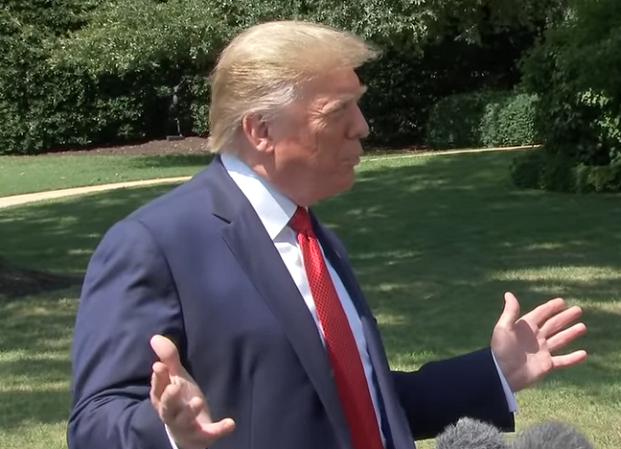 The humorless #Resistance media has again jumped the shark with their latest bizarre insistence on taking seriously a joke President Trump made about being “the Chosen One” on trade with China.  This episode is right up there with Snopes “fact checking” the satiric website the Babylon Bee in terms of absurdity and just plain malice.

Personally, when I heard Trump’s comment about being the “chosen one,” my first thought was of Oprah once gushing that Obama was “the One” and the fun the right had with that for eight years.  Compounded by Obama’s bizarre assertion that his 2008 nomination would be remembered as when the oceans stopped rising and the planet began to heal, it quickly became “The Chosen One” and the “Teh One.”  After Obama’s snippy “I won” to the GOP, it became “Teh Won.”

Having lived through the Obama years, I just shrugged and figured Trump was sarcastically poking at the media as he is wont to do.  After all, they spent the Obama years in a leg-tingling fever of awe-struck, sycophantic groveling before their chosen one.

The media is as completely unhinged now as it was then. They have simply flipped from tying themselves in knots excusing and running interference for Obama to tying themselves in knots to excoriate and “resist” Trump.  They simply cannot not take the bait and end up beclowning themselves.  They don’t seem to mind the very real risk of (still further) alienating the public with their clear and deranged anti-Trump bias.

Here’s the clip (a longer version of the presser can be viewed here):

He’s clearly having fun here. He mentions that previous presidents (ahem, Obama) should have taken on China on trade and did not, then he sort of spins to his left and dramatically looks toward the heavens before lightheartedly saying he’s the “chosen one” on trade with China.

He concludes by pointing out, quite rightly, that he was elected to work on deals that put America first. He campaigned on doing so and won his election, so he’s not wrong.

Pretty much nothing to talk about, right?

The president took to Twitter to explain the obvious: he was joking, it’s called sarcasm.

The dishonesty of the leftstream media is not surprising, but it is becoming increasingly tiresome.  They like to run tallies of Trump’s supposed “lies” and “misrepresentations,” but they’d do well to turn that penchant for counting lies and misrepresentations on themselves.

Ironically he is the chosen one.

taking seriously a joke President Trump made about being “the Chosen One” on trade with China.

We, he is. I am one of many who chose him to do certain Executive-type jobs. That’s what we did in 2016—selected him out of a field of job applicants.

Now, I certainly never chose Obama to stop the tides. He chose himself for that, not me.

Obama in 2008: “We are the ones we’ve been waiting for.” The crowd went wild, and journalists swooned. But now that it’s twice upon a time… “I am the chosen one” is demagogic. Or something.

To paraphrase the super-freak prophet, Rick James: “TDS is a heck uv a drug, man.”

He should have the press yelling questions while standing under the rotors of the helicopter as they’re being fired up for take off.

I am the chosen one = It’s a dirty job, but somebody has to do it.

“I will be the best chosen one ever. And the Devil will pay for it!”

One of the greatest weapons against tyranny is humor. Would-be tyrants are almost invariably self-important and chronically incapable of laughing at themselves.

notamemberofanyorganizedpolicital in reply to drednicolson. | August 26, 2019 at 5:48 pm

Believe destroying “ridiculing humor” was one of the main points of PC (really political corruption).

This confirms that the left and the msm have zero humor. They only understand snark when they use it. Just like the time, DJT said “Russia help us find hillary’s e-mail” or something to that effect. They used that joke to try and convince people that he was actually asking for Russia’s help! I wonder if they have heard the one about “Two a$$holes on a camel”?

Such humorlessness is actually a symptom of mental disease, usually schizophrenia. Not if demonstrated once or twice, but in the event it is continuous. As it is here. People can and do make themselves mentally ill. And it can be irreversible.

“The egalitarianism and welfarism of modern liberal government are incompatible with the facts of human nature and the human condition. But the rise to power of the liberal agenda has resulted from the fact that the people of western societies have irrationally demanded that governments take care of them and manage their lives instead of protecting their property rights. This misconception results in massive violations of those rights while permitting government officials to act out their own and their constituents’ psychopathology. The liberal agenda gratifies various types of pathological dependency; augments primitive feelings of envy and inferiority; reinforces paranoid perceptions of victimization; implements manic delusions of grandeur; exploits government authority for power, domination and revenge; and satisfies infantile claims to entitlement, indulgence and compensation.”
– Lyle H. Rossiter, Jr., M.D., THE LIBERAL MIND: The Psychological Causes of Political Madness

The Judeo-Christian tradition, as literature, is that everybody is the messiah. Who takes on the sufferings of the world if not the person who says “me.”

A matter of humility rather than pride.

Hillary is the rejected one.

She will always be remembered as the sore loser who lost her mind to TDS. How dare Trump beat her.

notamemberofanyorganizedpolicital in reply to JusticeDelivered. | August 26, 2019 at 5:45 pm

Even worse for her….only a footnote in history as
“Mrs. Bill Clinton!”

The media’s response was actually creepy. An indication that they believe their own fake news. That they live in a delusional world filled with hatred and a fantasy view of America and their place in society.

The Leftist Media Will do it to him every time. They will soundbite him to death.

I was in DC earlier this week at a meeting. The hotel lobby had CNN on the screen; this was a couple days after the comment had been made by Mr. Trump. Now whether it was real, in jest, whatever, I don’t know. But it was TWO DAYS later and the chiron on the screen was STILL blaring this out.

Humorlessness? Yup, CNN has that nailed.

I hoped you complained to the desk. My TV shows in doctors offices in my blue state have now moved to a cooking channel or a home improvement channel with great success. People waiting actually talk to each other about what they are seeing.

To be blunt, the media is fucked in the head.

They hate Trump so much that it doesn’t matter what he said or how he said it. It was just another opportunity for the fucked in the head media to attack Trump over an issue they created themselves.

The sarcasm is obvious from the substance. He was talking about being burdened, about being stuck with a job others should have done, not about being favored. If he was even more explicit — “Oh lucky me, the chosen one” — the Fake News would still say messiah complex.

notamemberofanyorganizedpolicital in reply to AlecRawls. | August 26, 2019 at 5:43 pm

Well, it’s obvious why the reporters were all smiling, isn’t it? They were salivating over the hay they were going to make out of those lines. Weeks of news!

Trump quoting an admirer on the same day Trump said he was the chosen one:

“…like he’s the King of Israel. They love him like he is the second coming of God.”

“1980 called they want their foreign policy back. Teehee” B. Obama

Has the NYT investigated how exactly obama was able to receive communications from the past? Is there anything he cant do?

When Ronald Reagan was in his first term he was asked to throw the ceremonial first pitch at an MLB game. I want to say it was an Allstar game. Reagan took the mound and the catcher moved out in front of the plate to make it an easier throw. Reagan motioned him back behind the plate and then threw a strike.

RE: “Oprah once gushing that Obama was “the One” and the fun the right had with that for eight years. Compounded by Obama’s bizarre assertion that his 2008 nomination would be remembered as when the oceans stopped rising and the planet began to heal, it quickly became “The Chosen One” and the “Teh One.” After Obama’s snippy “I won” to the GOP, it became “Teh Won.”

But President Trump is correct. He is.

He is the Chosen One, chosen by “We the People” by the rightful Constitutional way.

What the Times and other fools do not realize is that:
When Trump is Trump, his Deuce beats their Aces.