A storm is coming: America is “about to drive the train off the tracks on debt, spending and accumulating deficits.” 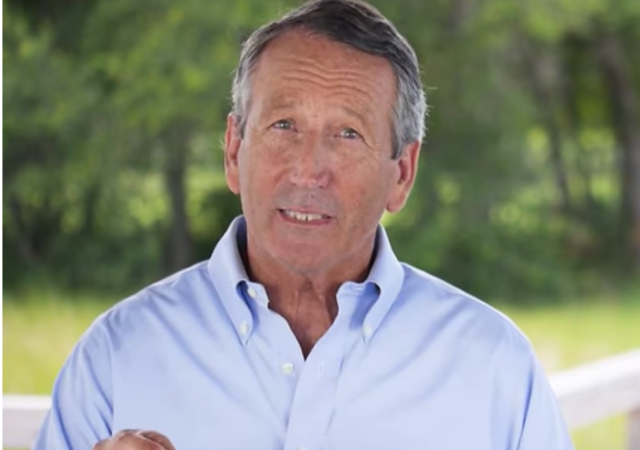 Former South Carolina Governor and US House Rep. Mark Sanford announced he will make a decision by Labor Day if he will launch a primary challenge against President Donald Trump in 2020. From CNN:

Sanford told CNN’s Jake Tapper that he’s been encouraged to run for president by people who “have said we need to have a conversation about what it means to be a Republican.”

“Because the bent that we’ve been moving toward here of late is not consistent with the values and the ideals they believed in for a very long time,” Sanford said Tuesday on CNN’s “The Lead.”

He suggested that South Carolina voters are weary of “the bully in the schoolyard routine” from Trump.

“So I think something is afoot both on the financial front and frankly on the tone and tenor front,” he told CNN.

Sanford released a video on Monday that teased a potential 2020 run. He claimed “a big storm is coming” due to the financial problems in America. The government “not dealing with it would crush our economy, it could wipe out whatever we’ve saved, it could even destroy our Republic.” He pointed out that the Democratic candidates have “a long laundry list of new political promises that we can’t afford. Trump “rules out action on the very things that drive our debt and spending.”

The former politician encouraged people to reach out to him with ideas on how to fix America and make her prosperous again.

Sanford spent three days in New Hampshire this week. He told Fox News he would make his decision around Labor Day.

2020 Watch: In an intv with @foxnewspolitics in NH, SC gov/congressman @MarkSanford warns “we’re about to drive the train off the tracks on debt, spending, and accumulating deficits. And if we don’t all speak up as Americans and as Republicans we’re going to pay the price” pic.twitter.com/GW4J0IYdkh

He expanded on the points he made in his video:

“I think we need to have a conversation as Republicans about what it means to be a Republican,” Sanford explained. “One of the cornerstones to the Republican Party historically was, do we spend beyond our means? Do we believe in some level of financial sanity? And that seems to have gone out of the window of late.”

Sanford warned that “we’re about to drive the train off the tracks on debt, spending and accumulating deficits. And if we don’t all speak up, as Americans and as Republicans we’re going to pay the price.”

Some New Hampshire Republicans welcomed Sanford with open arms. From The Washington Examiner:

GOP political consultant Jim Merrill said Republicans generally supported a discussion about the mounting national debt, the growing deficit, and continued federal spending to put pressure on the Trump administration and to counter 2020 Democratic presidential candidates pushing policies such as “Medicare for All,” the Green New Deal, and student loan forgiveness.

An advantage for Sanford is that people in New Hampshire actually listen, Merrill told the Washington Examiner.

“Even if your candidacy isn’t successful, sometimes your issues survive your candidacy,” he said, citing Paul Tsongas, who won the state’s 1992 Democratic primary election on a fiscal responsibility platform.

However, Merrill admitted that Sanford would likely not beat Trump in a primary. He stressed, “that these issues aren’t being talked about.” Sanford could grab a victory even if he loses because if “the issues catch fire and someone grabs them then he’s contributed to the process.”

Merill warned that while it would help the Republican Party to discuss the debt and fiscal problems, it could get erased if the conversation spirals into “personal attacks on Trump.” Plus, Trump has ammunition against Sanford considering his past. Remember the lies about hiking along the Appalachian Trail to hide an extramarital affair.

He should go ahead and try, I would like to see if he pitches a Hillary like tantrum when he gets his tail kicked.

I looked up Sanford in the dictionary.

It has a picture of a sack of dog poo.

Yes, Mark Sanford to the rescue! What a man!

If he runs with that rat The Mooch, they can run as Sanford & Son.

Loins girded. Is the laugh meter on?

The Never Trump wing of the GOPe and their media lackeys are obviously reaching for the bottom of the barrel to entertain having this low IQ low life run and not mention his philandering and misuse of public funds. This guy is such a dirt bag he should be a Democrat.

I can understand why he needs a conversation about being a Republican.

Mark Sanford needs to go hike the Appalachian Trail again and stay there. I imagine this sex addict is on Epstein’s list 🙂

Sorry Sir Sanford of Sandlapper. You lost our trust in 09 when, after appearing at the Tax Day TEA Party rally on 4-15-09 and addressed the crowd on the State House steps you decided to lie to us about where you had been. I wonder where Maria is today? Did she take a letter? We South Carolinians haven’t forgotten your ruse. Do us all a favor and take a hike!

Charleston has long been a place for arrogance; and his sheer arrogance is off the charts. Go away!

And that seems to have gone out of the window of late.

“Of late.” My TDS detectors are ringing off the scale.

The spending problem is inherent in the way Congress does business. Trying to pin the blame on one man is silly. Congresscritters get votes for their pet projects by promising to vote for somebody else’s. This is labeled something positive, like “bipartisanship” and everybody pretends that it’s good. So in the end, everybody’s pet projects get funded. And since they all cost money . . .

When you have absolutely nothing to add to the conversation, think Mark Sanford or Bill Weld.

Wow, what a coincidence! That’s the same day I’m going to decide whether I’m going to launch a primary challenge too!!!

Sanford’s decision will have about as much impact on things as mine will, you can be sure of that.

How did the Communists take over North and South Carolina????

Loins girded? As I seem to recall he was pretty devoted to his loins in Argentina. Maybe he should go there.

this guy looks like an older version of beto–maybe even fredo–he’s just blessed with one of those ” Slap me ! ”
faces

Not everybody is a mathematician or accountant, but the debt is the sum of all the deficits that have ever been. You can’t reduce the debt, or even stop it from growing, unless you balance the budget. The political possibility of balancing the budget is zero in the age of media soap opera.

Negative interest rates might balance the budget nicely. Get income from the debt, income that is not even needed to pay interest on the debt. Use it to buy back debt.

Happy trails to you

I live in his district. I’ve known him for years. He’s an idiot, a self-delusional one at that.

He should be the subject of a scientific study: he’s the only vertebrate on the planet that has no backbone. Heh.

I can assure you, he is not the only vertebrate on the planet that has no backbone. The GOPe has created a new species…

I’ve been craving hamburgers for awhile now. I think I’ll be grilling some this weekend.

The former politician encouraged people to reach out to him with ideas on how to fix America and make her prosperous again.

All us old geezers should add excitement to our lives my secretly taking up with a South American woman and try to get others to pay for our dalliance.

Thought he was in Argentina.

Let me try to embed a link:

Shocking news! Republicans in SC haven’t forgotten Sanford’s deception in 2009! This guy is utterly lacking in self awareness. Is he Kasich’s brother from another mother?

So despite the Trump Administration:
1. appointment of a record number of Federal Judge with more to follow
2. Economic growth that has unemployment across every demographic at record lows
3. A return to pre WW2 trade and tariff regime which is winding down the post WW2 idea that the U.S. should be the mark paying for global security and global economic health
4. Beginning to withdraw from the neoconservative backed role of middle eastern police force
5. Manufacturing onshore to come as supply chains adjust to life with a tariff regime which puts U.S. workers first
6. Rolling back the more prohibitive cost benefit basis environment regulations

We are supposed to dump the Trump Train for the Appalachian Express?

Where was this dufus when Obama was running?

Taking a moment to ignore the messenger in favor of the message, Sanford is in the right corner, for this is exactly what the TEA party was focused upon–a Federal government that doesn’t spend our grandchildren into oblivion. The problem with trying to corral and tame the Federal debt is the fact that no more than 20 of the 535 people representing the 300+ million Americans have given the pending insolvency of our country more than 2 seconds of thought. And only a couple actually try…

When Sen. Paul (KY) proposed a simple method of keeping the USA afloat, only 22 votes in a Senate with 53 Republicans thought it was a worthwhile goal. So yes, the Republican Party of 1970 is long dead–replaced by the Conservative Democrat Lite Party (i.e., GOP). Republican ‘darlings’ L. Graham (SC), T. Scott (FL), and T. Cotton (AR) all voted No to fiscal sanity.

“One of the cornerstones to the Republican Party historically was, do we spend beyond our means? Do we believe in some level of financial sanity?” To ask the question is to know the answer is NO. The GOP is no different than the DNC when it comes to fiscal restraint…they merely wish for us to be free from too much control so that when the collapse comes and civil war erupts, we can at least defend ourselves.

The GOPe ALL have been saying for years that they are for fiscal restraint, and they all lied. It’s like when somebody says they wish they could play the guitar like Clapton, but they never want to practice.

Where was this ass-clown when Obama was doubling the national debt?

Mark Sanford is a great one to ralk about “values and ideals.” He’s the nly Republican worse than Weld and Kasich.

Sanford needs to find some NeverTrump suckers to fund his lifestyle for another few months.

He is certainly right about runaway government spending. We railed against it and cried about it when Obama was in office. I never hear anything about it now, from either political side. We need to shutter entire agencies and half some departments. We need to reduce welfare and food stamp handouts (not social security). There is a storm coming. I just wish Trump cared about that as much as he does about all the other great stuff he has been doing.

The last thing we need is another globalist president in the White House. We have aready had too many in the last 100+ years. Starting with the election of Woodtow Wilson.

But what of his Argentinian who-er for whom he left his cancer-striken exwife? What does she think?