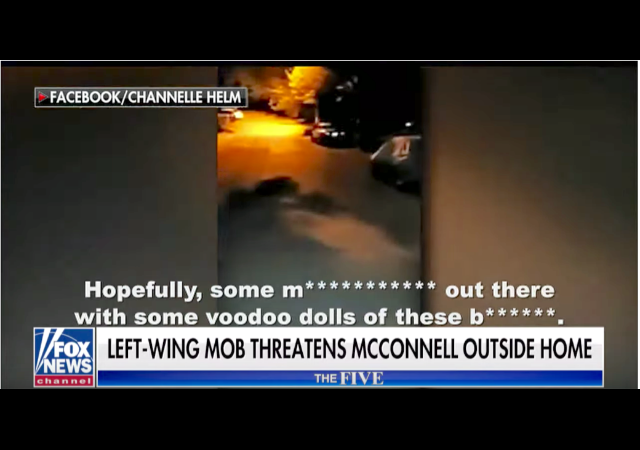 A video captured people making violent comments and threats, such as asking someone to stab McConnell “in the heart.”

Protesters gather outside McConnell’s Kentucky home, one calls for his stabbing ‘in the heart’

A group of protesters supporting gun control gathered outside the home of Sen. Majority Leader Mitch McConnell, R-Ky. where one expressed that someone should “stab the motherf—er in the heart.”

The protest took place on Sunday night in the wake of mass shootings in El Paso, Texas, and Dayton, Ohio. McConnell is currently recovering from a fall he had over the weekend, leaving him with a fractured shoulder.

Approximately 25 demonstrators stood on the sidewalk near McConnell’s Louisville home, shouting “No Trump, no KKK, no Fascist USA!” while others called him names like “Murder Turtle” and made loud noises by banging objects and dragging a shovel back and forth on the ground as a group of security personnel stood between the protestors and the home, WLKY reported.

“The b—- is home — we keep seeing the lights go on and off,” another protester can be heard shouting. “This h– really thought he was going to get ready to be at home after he hurt his little punk ass shoulder. B—-, don’t nobody give a f—! F–k your thoughts and prayers, Mitch. F— you, f— your wife, f— everything you stand for.”

I don’t believe it’s fair to call these people protesters. When an angry mob shows up at someone’s home, their intent is to terrorize the people inside.

Here’s a video from the scene. Strong language warning:

A woman is on Facebook Live, outside of Senator McConnell’s home in Louisville, saying she hopes someone “just stabs the mother f*cker in the heart, please.” #KYSen pic.twitter.com/sHaPWqn32J

The panel of The Five on FOX News discussed this yesterday if you want to hear more about this:

One of the amazing aspects of this story is how it was framed by major media outlets. Look at how the Washington Post framed it on Twitter:

Mitch McConnell’s campaign decries protest outside his Louisville home as a call to violence https://t.co/zxueKGOqr7

IMAGINE the outrage if it were a protester outside AOC’s apartment saying someone needed to stab her.

IMAGINE the liberal mob that would have formed if WashPo’s headline was “AOC team pounces on protest.”

These are the same folks who clutch their pearls when Trump calls the media an enemy of the people.

The left likes to advertise that they’re at the low end of the IQ curve. It’s a successful posture so far.

I’m sure every member of this crowd that calls for murder on ideological grounds sees himself as a fighter for peace and justice.

No dog whistles there. No need to twist words to make it sound like they said the opposite of what they actually said. Just pure naked hate and blatant threats of violence. Apparently that doesn’t count.

lord–why did we ever outlaw dueling?–would be invigorating and satisfying to step outside, choose weapons, and put a few of these loudmouths out of our misery–after a few such events all this crap would die down(literally)and eventually disappear

We support them whenever we fail to label them properly. They are a leftist mob of thugs sent by the Dems. These “people” are likely paid by the Dems with perhaps a few useful idiots present for training.

By any means necessary. The ends justify the means.

And because Mitch is a Republican, over at the DOJ, the Jim Comey “No reasonable prosecutor would bring charges…” rule will apply to the protesters, in this land where all men were created equal, with some, Democrats in particular, more equal than others.

I’m starting to argue we should criminalise death threats. It could only be at a misdemeanor level for the first few, but if someone keeps making meaningful ones, should rise to the level of felony, with trial by jury to lose their right to vote and own guns.

That would not only catch people like the latest rounds of mass murders but would also tramp down on this sort of bull.

The First Amendment is to support open debate and freedom of faith. It never was about the ability to intimidate others by threats of violence.

Actual threats are already criminal, and they are routinely prosecuted. Nothing these people said was a threat, and everything they said was protected by the first amendment.

But noisy demonstrations on residential streets, at night, can be restricted on completely content-neutral grounds; it doesn’t matter what you’re shouting, you can’t do it on this street, at this time, when people are trying to sleep, get their kids to sleep or to have a quiet dinner, etc. They should have been cleared away on those grounds.

Let’s not just put the media on the hook here and let off the leftist politicians. Where are there condemnations of this violence? Does it take a Scalise type shooting to get them off their duffs?

I don’t really recall that the Scalise shooting caused the left to tone down their rhetoric, or engage in any introspection. Perhaps I missed it.

But it did cause them to pay lipservice to the idea of non-violent political disagreement if only for a moment. Does it mean much? Little…but at least it acknowledges that they are aware of the problem when they do nothing about it.

Begs the question, did anyone call the police? A McConnell, a Chao, a neighbor?

Alternative Headline: Deranged Mob Harasses Elderly Man At His Home In The Middle Of The Night

Why not run with a headline like that MSM hmmmm?

Make the idea of circumscribing freedom of speech seem reasonable, then once it’s enshrined in law (or even merely in custom), pervert it to totalitarian ends. It’s what they did to “free speech zones” (a perfectly reasonably idea quickly perverted into its exact antithesis) and the concept of “hate crime” laws. This is more of the same old crap. (And why not? As Harry Reid could tell you, “it works.”)

Much better to just accept the fact that participatory government is noisy, and most of the noise isn’t worth hearing.

Yes. But also load up, in case one of the useful idiot “protesters” tries to break down the door again.

Participatory government is indeed noisy, and often offensive, but it doesn’t belong on a residential street at night.

Mirror, mirror on the wall, which party is the most uncivil of them all?
(Mirror answers): The party of slavery, secession, segregation, socialism and sociopathy.

When the mob is making death threats, maybe its time to test those non lethal sonic crowd disruption tools that our Government has. A little high pitched blast might just be what the doctor has ordered and the mob can cool down.
Protest is protected speech. Threats are NOT.

Actual threats are not protected, and are criminal, and if anyone in this crowd had made any they’d have been arrested. But nothing they said was a threat, and it all was protected.

This is all that the contemporary, jackbooted, totalitarian Leftist goons have to offer — threats, intimidation and violence against anyone who doesn’t share their beliefs.

These twits are so possessed by a self-perceived sense of messianic righteousness, that anyone who dissents from their orthodoxies is to be vilified and destroyed.

Ah, the reason why high capacity, semi-automatic rifles should be available to the public. Hostile crowd control.

Yep, the Korean store owners defending their businesses during the 1992 LA riots comes to mind.

Yes indeed: The authorities were not protecting them so it was necessary for them to defend themselves.

But it did cause them to pay lipservice to the idea of non-violent political disagreement if only for a moment. Does it mean much? Little…but at least it acknowledges that they are aware of the problem when they do nothing about it.

I suspect this will increase the man’s resolve to cram even more conservative justices down their throats. Maybe even a Supreme on November 1, 2020.

So why aren’t the police arresting them on disturbing the peace charges? Disorderly conduct? Loitering? Wouldn’t be surprised Mitch asked them to stand down so as not to give them the photo op.

Though a good lawn sprinkler system could make for a welcoming message.

McConnell is the guy who blew the base off upon obama’s election, telling us outright and arrogantly that he’s going to work with the traitor.

Well, mcconnell’s cheerful enabling of a traitor has resulted in the development of an army of fascists embedded in our government, schools and media – and the democrat party.

Karma is biting mcconnell in the ass, and it’s hard to defend him as a “republican.” He should be defended as any citizen should be against these obama-seeded maniacs.

Nonetheless, it’s fun to watch mcconnell FINALLY get the message. Can’t wait for this guy to leave the senate leadership.

Mitch needs a big assed sprinkler system with 3 or 4 heads out of adjustment.

It showed a person allegedly calling for violence against Mitch McConnell

They could have removed the video and not my tweet

Keep in mind, Twitter allowed (#)MassacreMitch to trend on the platform for days and there are multiple tweets on this platform that list where he lives
—————————

A protester, who appears to be a Warren supporter, said somebody should “just stab the motherf*cker in the heart”
—————————-

That far-left activist is a member of Louisville Democrat Mayor Greg Fischer’s “Synergy Project,” which essentially is an anti-violence taskforce

Reminder, this activist allegedly said McConnell should be stabbed in the heart and have his neck broken

I don’t agree with the turtle a lot of the time but this behavior is BS. Unfortunately for Mitch, he lives in the liberal cesspool county of Jefferson which contains Louisville. They have a socialist, useless, left-wing POS mayor who does nothing to stop this. I guarantee if a bunch of conservatives showed up at his home or at the home of fellow useless Rep John Yarmuth, the cops would be all over it.