Investigation Launched Over 10 Suspicious Deaths, Including One Homicide, at West Virginia VA

Investigation Launched Over 10 Suspicious Deaths, Including One Homicide, at West Virginia VA

Investigators found the veterans “all about in the same shape.” All of them had “suspicious doses of insulin.” 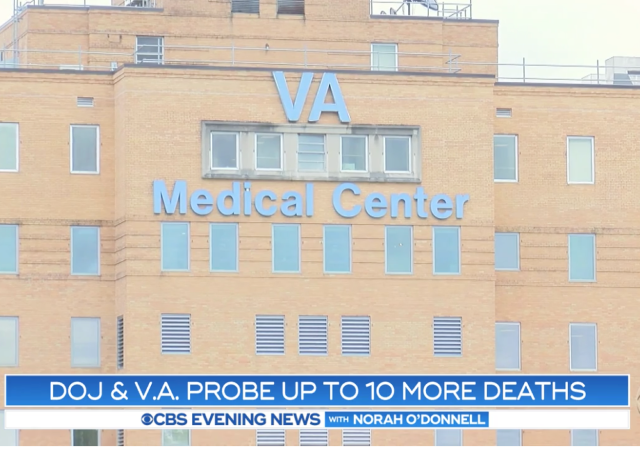 Three people have told USA Today that authorities have launched an investigation into the Louis A. Johnson VA Medical Center in Clarksburg, West Virginia, due to 10 suspicious deaths.

A federal medical examiner ruled one death a homicide.

Authorities exhumed the body of Army veteran Felix Kirk McDermott, 82, in October due to the investigation into the other deaths. From USA Today:

A federal medical examiner conducted an autopsy and concluded that McDermott’s sudden death on April 9, 2018, was caused by an injection of insulin into his abdomen – which can kill someone who is not diabetic.

There was no order for the injection in McDermott’s hospital records, and he had no history of diabetes or insulin use to control his blood sugar levels, according to the autopsy report.

“It’s just not right,” his daughter Melanie Proctor told USA TODAY. “I thought my dad was safe there.”

Proctor, whose father had dementia, and her lawyer said investigators with the VA’s Office of Inspector General told them his death is one of about 10 they are reviewing, a figure confirmed by a person briefed on the federal investigation who spoke on condition of anonymity.

No one told McDermott’s family how he died. He went to the VA for treatment for pneumonia.

Authorities found the other veterans “all about in the same shape.” All of them had “suspicious doses of insulin.”

Investigators for Veterans Affairs have zeroed in one person as a target of interest. They did not disclose the person’s identity, even to the McDermott family. No one has filed criminal charges against this person.

Sen. Joe Manchin, D-W.Va., issued a statement Friday, after news reports about the investigation were released, saying the reports were “shocking if accurate.”

“I am appalled that these crimes were not only committed, but that our Veterans who have sacrificed so much for our country, were the victims,” Manchin wrote. “As a member of the Senate Veterans Affairs Committee I will do everything in my power to investigate these accusations and get to the bottom of what happened. These families and loved ones deserve answers as soon as possible and I will make sure they get them.”

Proctor decided to seek “monetary damages, including $7,500 for funeral expenses.” If the claim is not resolved in six months the family can then file a lawsuit in federal court.

My heart breaks for these veterans.

Trump has done more in 2 years to seriously reform the VA than all other presidents combined. But it’s not enough. The agency is cancerous at its core. It’s little more than a perpetual jobs program for goverment employees – not the best medical care for our Vets.

Burn it down. Eliminate the VA entirely, and issue universal medical cards to be used at any (any) licensed hospital or doctor.

Government healthcare. What moron thinks that is a good idea??

Government healthcare. What moron thinks that is a good idea?

While I have legitimate complaints about the care offered by the V.A. ,this situation seems of a different caliber. This reminds me of news stories I’ve read in the past of nurses who took it upon themselves to “end patients suffering.”

Such is the nature of the debate over government healthcare. Who watches over patients? Are they morally fit, competent, and psychologically sound. Or are they working at the V.A. because they don’t qualify to work elsewhere?

I don’t know the answer to your questions but I offer up this: Remember that VA employees have the same protections against being fired as any other Government employee. That may explain some of the VA problems.

“VA employees have the same protections against being fired as any other Government employee. That may explain some of the VA problems.”
*****
There is no personal accountability at the VA, due in part to Civil Service and Union protections and protection for “protected” groups. The VA is all about “the process”, if there is a problem, appoint a “task force”, make recommendations to amend policy and procedures and implement employee education. My wife works at a VA and behavior that would get an employee fired at a non-gov’t hospital is the routine.

Answer. “…because they don’t qualify to work elsewhere.”

Remember when VA employees defrauded the government by creating dead end waiting lists and transferee veterans to these list so they could “earn” bonuses while denying Vets medical treatment? I never heard what happened to these criminals? Where they protected or prosecuted?

IIRC, 1 or 2 senior administrators were “fired” but later, after appeals, were back in VA employment. I think the final procedural outcome was that the fraud that had occurred was not really anyones fault but a “system” fault requiring “education”.

Manchin may be shocked and appalled, but veterans, most especially those with dementia, are vulnerable, should a predator manage to be placed in the VA.

The implication is that a serial killer found a comfortable spot.

That said, my dad, as a young man with appendicitis when penicillin was new, almost had a fistfight with an orderly. The guy comes in during the wee hours of the morning with a syringe full of milky-looking stuff, and if my dad had been asleep, he would have died.

He’d already been dosed, or maybe overdosed, with the drug, and had become highly allergic. The orderly had his orders, he wasn’t ready to hear anything from this airman, who became quite obstreperous before the incident concluded.

So, errors happen, too. That is why we have family in the room at the hospital, whenever possible.

Much of what is said here of VA staffing is what goes for health care in Nusing Homes. Under performers who wouldn’t be hired else where. The significance is the staffing levels are done at the minimal level with low pay causing high and frequent staff turn over. Like the VA, if you have someone who requires 365/24/7 care, plan on spending a lot of time there to secure their rights and care.

The VA: Giving America’s Veterans A Second Chance To Die for Their Country Since 1930

Another tragic example of why many Iraq and Afghanistan combat veterans refuse to utilize the VA medical centers if at all possible. Underperforming employees, some of whom are actively hostile, poor management and not nearly enough scrutiny.

As a medically retired veteran I have the option to utilize military medical centers and I do. If you have never been inside a VA Hospital let me tell you they are not happy places. There’s a noticeable sense of misery that permeates like a morning dog. Just damned depressing emotionally and physically draining.

IMO we should retain maybe 6-10 of the newest and geographically dispersed VA centers. Then give each one a particular area of emphasis in treatment and research of maladies specific to the veteran community. These centers would still offer the full range of care so that veterans could continue to use VA medical system if they choose.

Close everything else. All the smaller VA clinics and every other VA hospital. Reprogram the funds to transportation services for rural veterans and fully fund Veteran private medical care options.

For the life of me, I can’t understand why the VA hasn’t been completely dismantled after the waiting list scam broke in 2014. Who, on either side of the aisle, thinks that the VA is running smoothly and caring for our veterans in an efficient and compassionate manner? How is it possible that there have not been mass firings of the top of the organization.

If I was in charge, I would line them all up in order of rank and ask them all a single question: “What would you do to fix the VA?” If a person hems and haws and equivocates or passes the buck, “YOU ARE FIRED. NEXT?” When I found one that had a plan to fix it, I would give him the job and tell him he had a year to fix it. If not, he would also be fired.