The photos show a man in a Mexican costume pointing a fake gun at another man in a Trump mask. 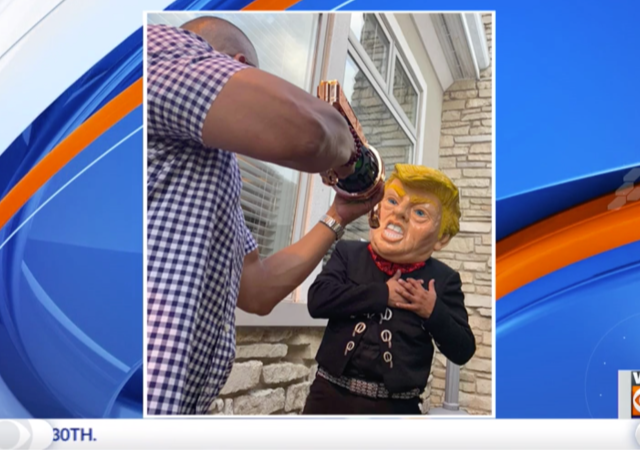 The photos show a man in a Mexican costume pointing a fake gun at another man in a Trump mask.

Sandoval, a powerful state lawmaker who chairs the Senate Transportation Committee and was a driving force behind the recent gas tax increase to fund the ‘Rebuild Illinois’ capital plan, issued an apology in an emailed statement.

“The incident that took place is unacceptable,” he said. “I don’t condone violence toward the President or anyone else. I apologize that something like this happened at my event.”

A political fundraiser for @SenatorSandoval simulates an assassination attempt against a mock @realDonaldTrump decked out in Mexican garb. Looks like a man pointed a fake assault weapon at the fake President to pose for a picture. pic.twitter.com/MlT9zjB1mn

Other photos show Sandoval with the man who held the fake gun, but we do not know if he knew about the mock assassination.

Republicans and Democrats in Illinois criticized the incident:

“As our nation grapples with the epidemic of gun violence, purposely pointing a fake gun at anyone is insensitive and wrong,” [Illinois Democratic Governor J.B.] Pritzker said Saturday night. “I condemn actions like the ones displayed in the pictures because they lack the civility our politics demands.”

“The tragedies in El Paso and Gilroy have demonstrated how hate-filled political rhetoric can fuel violence,” Maura Possley, a spokesperson for the Democratic Party of Illinois, said. “These images are unacceptable and dangerous. The place to make our voices heard against Trump is at the ballot box.”

Illinois Republican Party Chairman Tim Schneider said the apology came a “too little, too late.” He called on Sandoval to fire the person in the photo immediately if he works as a staffer or volunteer for the senator.

Sandoval has a lot of power in the Illinois legislature. He represents the 11th District, which includes areas of Chicago. He is also the chairman of the Senate Transportation Committee, which helped push through the massive gas tax increase in the state.

They’re only sorry that the stunt was exposed.

I apologize that the man is not viable, and that I indulged my Choice outside the privacy of walls designating the boundary of legal and ethical sanctuary for Planned assassinations. Some may ask: Orange you phobic? I reply that I am nut. #HateLovesAbortion

You would think a lawmaker would be familiar with TITLE 18 USC 871. There is no free speech clause that’s a federal law

What are you talking about?

First of all, free speech overrides federal law. Any purported law — federal, state, or local — that abridges the freedom of speech is automatically not a law at all.

Second, the law you cite does not abridge the freedom of speech, because it concerns only actual threats. Nothing in this tasteless display came even close to being a threat. Wishing the president would be murdered, or even advocating his murder, is not a threat, and is protected speech. Not only can there be no law against it, but government employees cannot be fired for it (unless their speech attracts such publicity that it becomes impossible for them to do their jobs).

Did facebook take the photos down, ban the user?

least it wasn’t a rodeo clown…..

notamemberofanyorganizedpolicital in reply to dmacleo. | August 19, 2019 at 2:26 pm

Or some lowly blue-collar Joe the Plumber………

“The tragedies in El Paso and Gilroy have demonstrated how hate-filled political rhetoric can fuel violence,” Maura Possley, a spokesperson for the Democratic Party of Illinois, said.

Forget to mention Dayton? Of course you did, Democrat.

These clowns (yeah, I know, a racist term) have to contrive a phony argument where anything Trump says is a “dog whistle” calling on white supremacists to engage in mass killings. And it always seems to be self-loathing white people doing it.

But if we call them out for their overt, brazenly racist attacks and mock assassinations, we are racists. Enough already!

notamemberofanyorganizedpolicital in reply to Pasadena Phil. | August 19, 2019 at 2:36 pm

Well at least you didn’t say “These Klowns,” or “These KKKLowns” both of which would be very apropo imo…….

At least some Democrats in high public office have sense enough to know this nonsense is unacceptable.

When they are caught.

These are the SAME JACKASSES that whine about the ‘current state of our discourse’ and demand that Republicans stop being so ‘toxic’.

Can’t imagine why he thought it was appropriate in the first place….or it might be a way to get attention.

notamemberofanyorganizedpolicital in reply to puhiawa. | August 19, 2019 at 2:36 pm

“As our nation grapples with the epidemic of gun violence, purposely pointing a fake gun at anyone is insensitive and wrong,”

No. Dramatic depiction of shootings has not suddenly become insensitive or wrong. We don’t have to dump half the plays and movies ever written or made. This depiction was insensitive and wrong, not because it involved pointing a gun and someone, but because it was malicious and expressed a wish for the event it depicted to happen. That doesn’t make it illegal, but it does make it in very bad taste.

Having all these apologies is depressing. The right shouldn’t run under the made-up rules of the left.

Say anything you want.

The right shouldn’t run under the made-up rules of the left. But the left should, and if they won’t they should be forced to.

These people accuse the rest of us of using “dog whistles”, but they themselves openly treat the assassination, whether literal or character, as a minor matter.

From the photos, the “Trump” character looks more like “Booji Boy”, a character from DEVO’s devolution toolbox.

IL will be the next CA. High taxes, more gov. taxing bodies than any other state, grossly overpaid and unaccountable gov employees. Its a shithole which for years has been losing residents and based on the upcoming census will lose at least one congressman.

Another interesting fact about IL politicians. Several of the most powerful members of the legislature have side businesses helping property owners appeal real estate taxes. These guys have been in state gov for decades, are millionaires many times over and yet they still greedily feed at the taxpayer trough by helping corp.’s and the elites like our current gov. reduce their tax burdens at the expense of we serfs. In fact one alderman, Burke, has been indicted for attempting to extort a business owner over a small improvement project at his restaurant. The billionaire Gov Pritzker even went to the trouble of removing the commodes from a property he owned so it would be declared ininhabitable and reap a 200k reduction in his tax.

I don’t get how any politician could be so stupid to do shit like that and think it won’t come back to bite him in the ass. Just plain stupid.