Democratic Frontrunner Joe Biden Falls in Recent Poll. Can He Get Up?

Democratic Frontrunner Joe Biden Falls in Recent Poll. Can He Get Up?

Some Democrats say Biden should be “very concerned” about his dramatic drop in a recent poll. But could this just be an outlier poll? 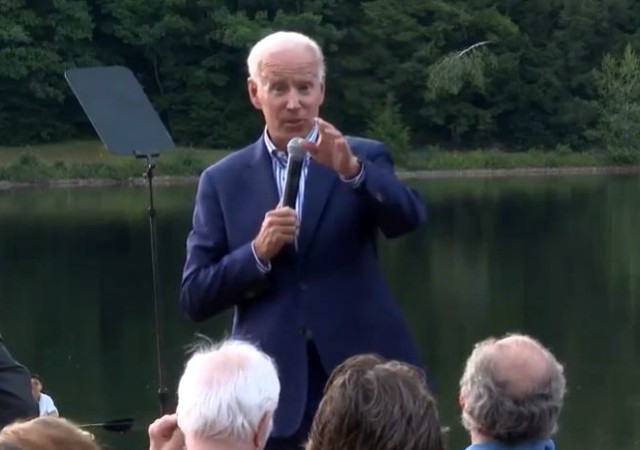 When last we left you, Joe Biden added two more flubs to his ever-growing gaffe list. Along with that were heightened concerns being expressed by Democrats that Biden may no longer be cut out for the rough and tumble of the campaign trail.

Questions have popped up over the last few weeks about Biden’s age, mental acuity, and toughness. Now comes the news that will be even more unwelcomed by his campaign. A new poll released Monday by Monmouth shows a significant drop in his numbers, putting him in a three-way tie:

Joe Biden’s support in the race for the Democratic presidential nomination is slipping, according to a new survey from Monmouth University Poll that shows the former vice president dropping below 20 percent.

The survey showed Biden with support from 19 percent of Democratic and Democratic-leaning voters nationally, a double-digit decline from Monmouth’s most recent poll in June when he led the pack with 32 percent.

Now, the dynamics have changed, according to the Monmouth survey. Sens. Bernie Sanders (I-Vt.) and Elizabeth Warren (D-Mass.), the primary field’s top progressive candidates, are each at 20 percent, putting them in a statistical tie with Biden and indicating a tightening three-way race.

Since he entered the race, Biden has suffered some minor ups and downs in polling. However, he has consistently remained on top by large margins. This one is quite different and some Democrats, including Van Jones, say Biden should be “very concerned.”

But could this poll be an outlier, as the Biden campaign suggested? Polling guru Larry Sabato dug into the numbers, and thinks it might be:

This new poll is based on 298 registered D or D-leaning voters. Big 5.7% margin of error. Monmouth is a solid pollster but polling averages are even better. Bet some polls around Labor Day show quite different results. https://t.co/AKlUYQWjbp

On the question of “Can Joe get up?” after taking a fall in the polls, the answer is yes:

Biden now has the support of 33 percent of Democratic primary voters across the nation, according to the Morning Consult survey, 13 percent above the next-most popular candidate, Sen. Bernie Sanders (I-Vt.)

The Morning Consult poll surveyed more than 17,300 voters between Aug. 19 and Aug. 25. Its margin of error is 1 percent.

But though the Joementum Express continues to roll on, the Gaffetastic Machine isn’t far behind. Biden was at it again late last week in New Hampshire, and added more flubs to the list:

Joe Biden doesn’t know what state he is in.

While in Keene, New Hampshire, he said: "I’ve been here a number of times… I love this place. Look, what’s not to like about Vermont in terms of the beauty of it?” pic.twitter.com/3DjOYuHfSx

But at a campaign stop in Croydon, New Hampshire, he tried to assure voters that he was “not going nuts” just because he kept forgetting or misstating things:

2020 presidential hopeful Joe Biden continued his string of gaffes at a campaign stop in New Hampshire on Friday, where he had to reassure the crowd that he wasn’t losing his mind.

Biden spoke at the Ivy League college, Dartmouth, several hours before the campaign event, but had trouble remembering the specifics of his surroundings and whether or not he spoke at a medical school.

“I’m not sure whether it’s a medical school or where the hell I spoke, but it was on the campus,” he added, as the crowd laughed.

Biden in NH tonight quipped that he isn't going "nuts" because he didnt know exact location of his earlier Dartmouth speech pic.twitter.com/0y7iqiDyHi

Regarding the age question, during a press gaggle in New Hampshire Saturday Biden told reporters that if voters were that concerned about his age, then they shouldn’t vote for him:

In a gaggle with reporters just now in Keene, NH @JoeBiden responded to a question regarding voters that have expressed concerns about his age:

"I say if they're concerned, don't vote for me," Biden said.

As it turns out, Biden’s age is the one issue voters seem to have with the frontrunner, according to 538’s Nate Silver, who also believes Biden has an “Iowa problem.”

Meanwhile, do we have a scandal brewing in BidenWorld? Politico reports:

Joe Biden’s younger brother told potential business partners that the former vice president would help their firm land business with court systems and would incorporate their health care model into his 2020 presidential campaign, according to new allegations made in a court filing in Tennessee.

The allegations are consistent with others made over the years that relatives of Biden have sought to enrich themselves off of his public service. But they go further, representing the first explicit claims that James Biden offered to have the former vice president use his clout to further private business interests.

The allegations come in sworn declarations made by executives at firms suing Biden’s brother that were filed in federal court on Friday. They do not allege any wrongdoing by Joe Biden or indicate that the former vice president had knowledge of his brother’s alleged promises.

File that one under “one to watch” in the coming months.

Biden is even more proof of the fraud behind obama’s malignant, goofball Fisher-Price presidency.

Next will be John Durham’s reports.

Obama is a complete fraud. Complete. Biden has proved his role in the plot, unwitting or not.

Whenever you’re explaining to the public at large that you’re not nuts, you might ask yourself, “Why are they associating being nuts with me?”

Hey, lets get “Dr Jill Biden” to the rescue.

What’s that you say, she’s not a real doctor?

That’s right. She’s a lady with enormous pretensions and a completely unjustified high opinion of herself having gotten a EdD from UDelaware for writing the significantly important, but entirely ignored, dissertation entitled, Student Retention at the Community College: Meeting Students’ Needs.

With that credential of course Doctor Jill can cure Old Joe.

At your advanced age, it is okay to press the button and say you have fallen and can’t get back up.

I don’t think this has much to do with age. This is biden, albiet a secret as well protected as obama’s or hillary clinton’s fraudulent fronts.

While I don’t think Biden will survive, and have no idea who the commie nominee will be,

Monmouth is a fake poll.

I would take the Monmouth poll with a very large grain of salt. With only 298 people polled it will have very large error margins. Wait until other polls with larger sample sizes become available. Of course, this is not to disagree with the notion that Mr. Biden is in the early stages of dementia.

This is the DNC playing with the puppet strings. The polls have a minimal impact on the DNC nomination/selection process.The DNC Superdelegates have the primary control and they are not going to put a Socialist at the head of the Democrat Ticket. Joe Biden will probably continue to lead in the polls and moderate Democrats will nominate him. His VP will be one of the, women Democrat Socialists. They will find a way to kick Joe to the side should he actually win.
As far as Joe goes, he is one of the worst debaters you have ever seen. I see a lot of memory loss in the comments. In 2008 Sarah Palin ate his lunch. In 2012, I don’t remember seeing him debate Ryan, but I had no interest in either one.