College Board Revamps SAT ‘Adversity Score’, Admits it Was a Mistake

College Board Revamps SAT ‘Adversity Score’, Admits it Was a Mistake

But the socioeconomic component is here to stay 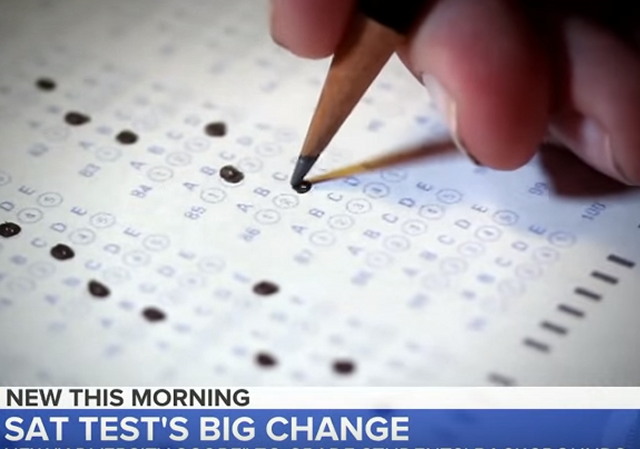 The College Board, which administers the SAT college entrance exam, is revamping the so-called “adversity score.” The score was given to colleges but unseen by applicants and effectively reduced the experience of an applicant to a single socioeconomic designation.

Mike blogged in May:

The College Board is trying to make the SAT more ‘fair’ for everyone by taking social and economic factors into account.

This is really just the latest attempt to institutionalize the concept of social justice into higher education. But this process is pernicious — the students who are assigned a socioeconomic score won’t know how they score, so they may be penalized in college admissions without knowing it. It’s like being on Double Secret Probation (ref. Animal House).

…Would you be surprised to learn that the man behind this plan is the same person who brought us Common Core?

Tuesday, the College Board announced a handful of changes to the socioeconomic score component. Students will be able to access to their designation and rather than a single number, a handful of government derived data points will be available for viewing by institutions and students.

The LA Times has more:

David Coleman, College Board’s chief executive, said in an interview with The Associated Press that some also wrongly worried the tool would alter the SAT results.

“The idea of a single score was wrong,” he said. “It was confusing and created the misperception that the indicators are specific to an individual student.”

The College Board announced several changes to the tool Tuesday, including the decision to give students access to the information about their schools and neighborhood starting in the 2020-2021 school year.

Renamed “Landscape,” the revised tool will provide a series of data points from government sources and the College Board that are seen as affecting education. They include whether the student’s school is in a rural, suburban or urban location, the size of the school’s senior class, the percentage of students eligible for free- and reduced-price lunch, and participation and performance in college-level Advanced Placement courses at the school. Admissions officers also will see a range of test scores at the school to show where the applicant’s falls, as well as information like the median family income, education levels and crime rates in the student’s neighborhood.

The tool’s creation was an acknowledgment of persistent criticism of the use of admissions tests in an era of growing concern with unequal access to advanced coursework and high-priced tutors that further advantage those with the means to access them. This year’s “Varsity Blues” scandal, which exposed cases of affluent parents cheating the admissions system, has brought further scrutiny.

I began discounting the SAT when they went to the 2400 point model. Now I’d say it’s 100% useless as a measure.

The SAT is worthless and high school grade inflation has made grades worthless.

notamemberofanyorganizedpolicital in reply to Barry. | August 28, 2019 at 6:36 pm

And all those “How to Take the SAT and ACT” courses which just teach students how to crib and guess better, but do not really teach them the skills they need, also invalidate those entrance test scores.

artichoke in reply to notamemberofanyorganizedpolicital. | August 29, 2019 at 2:13 am

There’s a very limited limit on what they can teach you about test strategy.
1. answer every question (no guessing penalty any more)
2. eliminate as many choices as you can
3. look for keywords

that sort of stuff. Maybe it gets you 50 points if you’re lucky.

Practicing and learning the style of the questions, which you only get by practice, is worth more than that. But those practice tests are available to everyone.

Basically CB wants EVERYONE to prep for the exam, so exam unfamiliarity is taken out of the picture. That’s what they say, and I see no reason to doubt it.

data sufficiency in math
analogies and antonyms in verbal

but now the reading passages are quite long, so fast reading speed is very helpful, and that’s linked to IQ. The test isn’t what it used to be, but it’s still meaningful.

Also, the “writing” part of the Verbal test forces you to learn those simple rules of grammar that English teachers refuse to teach anymore.

Use of commas.
Agreement in tense and number.
All sorts of stuff that used to be taught by diagramming sentences, but that kids are not expected to do anymore. Probably because half the English teachers don’t know how to do them either.

But you need it for the SAT or you’re giving significant verbal points away.

unequal access to advanced coursework and high-priced tutors that further advantage those with the means to access them.

It’s too bad none of these “landmark” points actually involve any of those things.

Given that anybody with a computer and internet access (which every American kid either already has or can get), can easily access any type of advanced coursework they care to learn, the “limited access” excuse should be less viable. But we all know it will continue to be used, because taking initiative and learning something on one’s own is some sort of “white privilege” or such.

Our commies are only slightly behind….

I’d rather have the Red China in charge than the College Board. At least I wouldn’t have to pay extra for not being dark enough.

Any qualifying test administered to large numbers of people (firemans’ lieutenant exam, SAT, etc) serves an an ersatz IQ test and winds up with the same average result as IQ tests do. If you break results of any of these out by race, you get the same breakout as you get for IQ tests.

That study producing those rankings is so full of holes as to be completely worthless.

Geneticists would be happy to hear of any holes. A lot of effort goes into measuring intelligence independent of confounding factors.

As I understand it, the report includes information related to you home address as well as the school. Home address is probably what you report to College Board. CB gathers a lot of information on registration questionnaires for their tests. Especially there’s a questionnaire students fill out before taking the PSAT, which is given in October of junior year, before students have started thinking and planning how to approach college applications. Much data is gathered here, it even asks for religious affiliation! So prepare for this before PSAT day; there’s no going back.

This is how it’s done at the most selective colleges, which are “need blind”. The admissions decision does not depend on finances, because they admit without seeing financial info. But now, College Board will be sending the Landscape info, heavily correlated with finances, to the admissions office. So “need blind” is no longer that.

Here’s my prediction. The diversity candidates will still get their slots. They won’t increase much if at all. But the rest of the places will go to the rich, who will not qualify for financial aid at all. The middle class will be shut out.

With all the discussions of excessive college loans, and college budgets stretched, I expect colleges won’t want to pay any financial aid to the non-diverse middle class. Those slots will be dedicated to those who will pay 100%, either rich foreigners or rich Americans. And it won’t depend as much on your income as your zip code.

So the middle class will be red-lined out.

Excellent summary and I agree with your conclusion.

Two classes of students will eventually get accepted …. Neither by their intelligence but by social standing. While the hard core world looks for “best and brightest” , the US seems to be promoting participation award diplomas. Does not end well.

Leveling the playing field by playing with the level. The entire idea negates the purpose of the test.

If it wasn’t basically mandatory, there would be no reason to pay for it anymore. Anti-trust prosecution, anyone>

Dang! You mean I spent all that money for melanin shots and a sex change operation for nothing? Bummer!

Look on the bright side, your vitiligo has cleared up.

Wasn’t Vertiligo a movie with Jimmy Stewart, where he drove around San Francisco a lot?

The concept of going from High School directly into one of the armed services, then cutting back to college to finish a degree (which you can get part of during service), sounds better and better.

“unequal access to advanced coursework and high-priced tutors that further advantage those with the means to access them.”

Or an SAT prep book with practice exams (which often includes access to online practice as well), for < $20. Which works just as well as a pricey prep course (although perhaps not quite as well as a really good personal tutor). Although it may require more motivation from the test-taker.

The bottom line is that the SAT (and similar tests) has value to the extent that it is a standard yardstick against which anyone may be measured: you don't need to have been born with the proverbial silver spoon to take it, or be the favorite of your teachers, or be most likely to succeed: you just pay your nominal test fee, and sit for it like everyone else.

The value of the SAT and similar tests remains only to the extent that it can remain a standard measuring tool. Any 'adjustment' of that (such as gaming ADHD to get extra time, or including an adversity score that's obviously intended to produce an interpreted "real" score) diminishes its value.

Taking the 8 online SAT practice tests (should take at least 4 of them before the PSAT, because then you prepare for both that and the SAT) and using the Khan Academy free practice which is supposed to be pretty good — that’s all FREE.

Sounds to me like they’re saying black people just aren’t smart enough to compete. Isn’t that what racism is?
Making judgements and rules based on skin color?
How these pricks wake up every day and tell black children they cant get ahead in life because the white man is holding them back, then pat themselves on the back like they did something good is beyond me.
Way to inspire people to attain greatness…d-bag.

Like a snake eating it’s tail, we keep promoting the inept into positions of authority and control. Sounds like a good way to crash a society.

The SAT is dead. Long live the ACT.

Nope, the ACT doesn’t get you out of it. They’ll convert ACT scores to equivalent SAT scores and plug those into Landscape too.

College Board is in the demographics business.

The SAT was revamped in 1996 and again in 2016. Each time, the average score went up, and more student started scoring above 1400 and 1500, so much so that it became almost useless for the top colleges, where the majority of applicants are above 1450 and there are more above 1500 than there are spaces.

For the Ivies, MIT, Duke, Stanford, Washington-St. L, Rice, Vandy, Northwestern and those small Northeast LACs, and maybe the Claremonts, the SAT doesn’t really matter that much any more, except to exclude Asians. Black and Hispanic applicants are basically decided on from separate admission pools, so their SAT scores don’t really count either.

They did lower the ceiling when they took out verbal analogies, math data sufficiency and verbal antonyms (“SAT vocabulary” gained by reading widely).

The math is pretty routine and detailed now, a test of alertness. The verbal requires fast reading because the passages now are long.

The SAT long ago debased its tests in the name of “diversity”–favoritism for blacks–all this bs is more of the same.