After three years of Russia Collusion Conspiracy Theories pushed non-stop by the mainstream media, this all seemed tame. 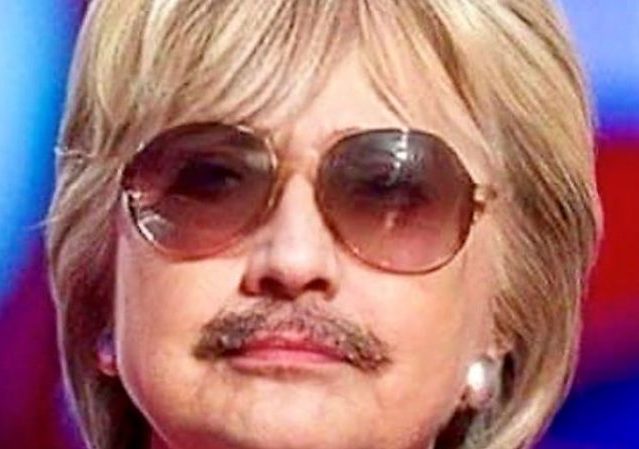 The news that Jeffrey Epstein dies in prison set off a feeding frenzy of #ClintonBodyCount versus #TrumpBodyCount.

Befitting the times in which we live, #ClintonBodyCount took the lead in Twitter Trending, only later to be overtaken by #TrumpBodyCount. leading to accusations that Twitter had manipulated the Trends to give prominence to anti-Trump voices.

The loons of Trump-Russa Collusion blamed the initial #ClintonBodyCount surge on Russian bots:

Understand that the reason Russian bots are all over the Internet making wild claims about a Clinton connection to the Epstein suicide is because key people in the United States and abroad know the *Trump* connection to Epstein is the one that matters, and is the real story here.

While there were some people who seemed to believe one or the other body counts, I think most people participating were just doing it for the troll factor. In the war of #ClintonBodyCount versus #TrumpBodyCount, #ClintonBodyCount was much funnier:

#ClintonBodyCount more likely he was taken out to avoid embarrassing rich folk pic.twitter.com/klbmiTx2XN

She was seen swiping left to delete emails on her iPhone as she was leaving. #ClintonBodyCount pic.twitter.com/bPo8U8WFok

According to prison logs, this was #epstein last visitor. #ClintonBodyCount #SaturdayMorning pic.twitter.com/orFg8aKFLA

No one actually believes the Clintons got to Epstein. Right? Right?

After three years of Russia Collusion Conspiracy theories pushed non-stop by the mainstream media, this all seemed tame.

There’s no way he wasn’t in ad-seg. He should have had Mark one eyeballs on him.

With horn dog Clinton riding the Lolita express a couple dozen times what are the odds they would allow him to speak? They sealed Reagan calling the African delegates, ‘monkeys’ for fifty years, Clinton’s crimes will never see the light of day.

The Federal “Metropolitan Correctional Center” calls its Ad-Seg unit the Special Housing Unit. Epstein was moved there after his incident 2 1/2 weeks ago where he either engaged in self-harming behavior or was assaulted, the issue being left up in the air. Single cell, lockdown except for attorney visits [admittedly he had his attorney come every day], and “living, breathing flesh” eyeball checks at least twice an hour. OK, except that they put him on suicide watch when he was moved there. That adds Pshrink visits, and a minimum of 4 more living, breathing flesh eyeball checks every freaking hour, staggered to not coincide with the regular checks.

He is known to still have been on suicide watch Thursday. Sometime Friday, he was taken off suicide watch. Except, as Federal regulations mandate, in order to take him off suicide watch the regular line Pshrink who visits him has to write and submit a report saying that it is safe to remove him from that status. It is submitted to the Head Pshrink of the Center, who then also has to do a personal interview with the inmate and write a report requesting the removal and be signed off by the Warden. What are the odds that the reports, the sign off by the Warden, or the log entries showing the entry of the Head Pshrink into the unit will ever come to light?

Now it turns out it is admitted by the staff on duty that they did NONE of the required rounds and checks that night.

And there are reports in British media, who will print things that the captive American media will not touch for fear of embarrassing the powerful, that the cameras in the unit were “non-functional”. Even if they were only on the outside of the cells, they would show anyone … unusual entering. An interesting and convenient concatenation of events for any of the hundreds of wealthy and powerful politicians, businessmen, celebrities, government officials; domestic and foreign, mostly Democrat but more than a few GOPe who his testimony could threaten . . . and most of them have access to official and unofficial “coercive instruments of state power” means that his death could be accomplished by a lot of people.

Is Bill part of this, or is the wet work solely Killerary’s responsibility?

Killary probably arranged the latest wet works. But I’m sure it was Bill who started the original “wet works”.

As I said after the first incident with Epstein, “This is a singing lesson. Don’t make us come by and give you another.”

The difference is stark: #TrumpBodyCount = Zero; #ClintonBodyCount = Not Zero.

Why would Clinton order this guy to be killed? To protect Bill and Hillary’s power? What power? To protect Bill’s reputation as, ah, a respectable gentleman? To keep Bill out of jail? You think if Hillary wasn’t touched over emails, Bill was going to serve time for anything?

If Bill is to be implicated, Epstein’s death doesn’t matter. There will be evidence besides Epsteins’s say so. Actually, I think it will be easier to bring people to justice. Who’s a dead guy gonna bribe?

Epstein’s death is worth more cash than he was worth when it comes to silencing witnesses. It’s a “We can get him in jail, we can get you anywhere” message that can’t be bought otherwise.

Look, I’m open to this being a suspicious death. But “suspicious” is not required to be a story involving only the Clintons that is more suspicious than Tom Clancy x John Grisham suspicious.

But the Clintons, big targets though they are, aren’t the only targets. We really have no idea who else would be threatened if Epstein spilled the beans.

You are too focused on the Clintons. There are scores more powerful people who would like Epstein silenced including the British royal family. And if you think the Clintons are “out of power”, you aren’t paying attention.

We have only scratched the surface of what is really going on with the “elites”. The law moves much slower that information can be deleted, especially when so much of today’s wealth controls the data infrastructure and the governments charged with protecting us.

It is kind of like who shot JR, but there is no next season to publicize the culprit.

“Why would Clinton order this guy to be killed?”

Got it. They wish to stay out of jail.

How come the Clintons didn’t murder Epstein when he was facing charges 14 freaking years ago? Hello, is this thing on?

In 2005:
Hillary was a senator.
Hillary was planning on a presidential run.
The Clinton Foundation could not vacuum cash fast enough.
Bill was raking in gobs of cash himself, #MeToo wasn’t a glint in Alyssa Milano’s eye.

What’s that sound I hear when mentioning the Clintons in 2019? Oh yeah – the sound of crickets. No one cares about the Clintons any more. Don’t take my word for it. Take the word of Maureen Dowd, who wrote this not even a year ago:

I can’t fathom why the Clintons would make like aging rock stars and go on a tour of Canada and the U.S. at a moment when Democrats are hoping to break the stranglehold of their cloistered, superannuated leadership and exult in a mosaic of exciting new faces.

The deal was made, no need to eliminate him. This time, no deal.

It’s not terribly difficult to understand this time is/was different.

Before, the Clintons controlled a fix which they don’t control now. They don’t have the pull to spring Epstein this time, so they have to “take care of him” in a different way.

All speculation, of course.

Not only the Clintons. There are a lot of others in that cabal who potentially have a lot to lose. It’s just that the Clintons have a tendency to have people who can hurt them turn toes up.

There is also the Clinton Foundation to be protected. Epstein probably had enough dirt to make life uncomfortable for more than Bill & Hill.

It’s well past time to shutdown the DOJ in its entirety and to let the US Marshals office take over until the DOJ can be completely reconstituted from scratch.

I have no faith whatever in the DOJ while Strzok and McCabe seem to be completely fine with the organization.

This death is suspicious. Epstein apparently told people that someone tried to kill him the first time. You also have to believe that Epstein, being a narcissist, believed he would got out temporarily.
Then it’s a quick jump to his island where he can live out his life untouched, or at least move to a place where he would be untouched.

I’m sure there were a lot of people that wanted him dead, and a lot of those people could actually arrange it. The Clinton’s are only on the top of the list.

The difference between the Clinton Body Count and Russian Collusion is that Epstein’s death in prison was predictable. At least I certainly expected it. I’m sure others reading this did too.

“Once is happenstance, twice is circumstance, three times is enemy action.”
Goldfinger

In #5 above “ROLCON” refers to role playing as a conservative

Good take on all this.

I imagine Epstein was spirited away to a beautiful remote island with many beautiful women (and perhaps girls), where he can live out his remaining days, partying in peace and comfort.

When I looked all Twitter tweets referenced above they all said Something went wrong. Thank goodness the 1st Amendment Thought Police are doing a better job at protecting us from the truth than the jailers in NYC.

keeping an open mind but popehat raises some very good issues that many ignore. I have worked in the orbit of corrections officers and prisoner guarding was one of my primary responsibilities as an MP (we trained however my unit was LEO and Nuke Security) and he really raises some issues to consider.

Epstein should have been on homicide watch.

Whether you believe suicide or murder there is no doubt that this Federal Facility failed miserably in it’s duty to produce a live inmate for trial.

One more nail in the coffin of people’s trust in their government.

dmacleo, my apologies. That thumbs down is mine…the result of fat fingers and a tiny keyboard. There doesn’t seem to be amy way to remove it, so all I can do is say I’m sorry.

LOL no worries, I did wonder. its all good my friend.

It’s not often that I’m with the tinfoil hat crowd, but I am now. This has “hit job” written all over it. No one will believe anything the feds say about it, nor should they.

Call me a conspiracy loon but Epstein’s demise just seems too timely. It seems doubtful that any legal actions taken in civil court will be as wide as what would have occurred in criminal court. Since the main offender is dead – what means would be available to deal with all the other parties who were supposedly involved?

On somewhat of a tangent, I just went to the DOJ OIG site. I randomly picked 10 reports from 2018 and 2019 and 9 had the sentence “Criminal prosecution of the (investigation’s subject) was declined.” Sounds like that sentence is set up for autocomplete in the OIG office computers.