Scott “ThePersistance” Presler did the job Democrats refused to do. 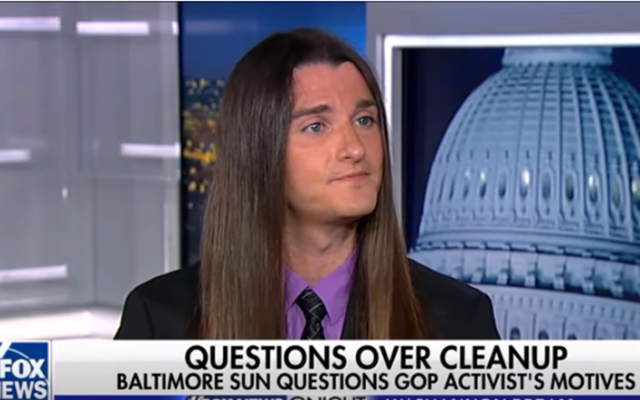 The American media has really plumbed the depths of new lows this week.

In the wake of the ginned-up controversy surrounding President Donald Trump’s tweets about Baltimore and the political and press hysteria over the remarks, Presler used his internet star power and persuasion to organize a clean-up of the Congressman Elijah Cummings’ district.

An ardent supporter of President Donald Trump marshaled about 70 people Monday for a community cleanup in West Baltimore.

Scott Presler, whose Twitter handle is “ThePersistence”, first suggested the cleanup in a Twitter post that has since gone viral. The Pennsylvania man said the effort is not a “pro-Trump rally or an anti-Rep. [Elijah] Cummings” event, referring to the Baltimore congressman who Trump took aim at in tweets and remarks more than a week ago.

Next week, I’m coming to Baltimore.

I’m organizing a trash clean up in the city.

If you’re free on a week day, after work, please comment below for more details. #WeAreBaltimore

After organizing supplies, refreshments, and dump trucks, Presler led a group of about 200 in the clean-up efforts on August 5. They removed about 12 tons of trash that day.

This is one of the proudest moments of my life. #AmericansHelpingAmericans pic.twitter.com/TxLY2Ippra

However, it seems no good deed can go unpunished if it involves Trump in some way. The Baltimore Sun offered a snark-filled assessment of Presler’s efforts.

…Whatever he says his motives were, Mr. Presler’s presence in Baltimore reinforces the tired image of our failing urban cores. That the poor people in this dilapidated city can’t take care of their own neighborhoods and all the public officials around them have failed as well. The bureaucratic, all-talk Democrats strike again. If a crowd of volunteers could clean up 12 tons of trash in 12 hours, how incompetent and helpless must Baltimoreans be if they can’t manage it in decades, right?

Amazingly enough, Mr. Presler is not the first one to come up with the bright idea of a neighborhood cleanup. It is not really that remarkable of a concept. In fact, they happen all the time. Sadly, it doesn’t take long for people (frequently from outside the community) to refill the alleyways with illegal dumping and for grass to grow again in front of vacant buildings with no resident available to tend the lawn. Does Mr. Presler know that drug dealers use trash to hide their product and have been known to threaten people who try to clean it up? The solutions are just not that simple.

I’ll offer a possible explanation of both the paper’s shameful minimization of Presler’s efforts and the hysteria over “white supremacy” that has been the focus of the American press since the slaughters in El Paso and Dayton: Black support for Trump has recently been as high as 34% (Hat-tip Leesa K. Donner and Don Surber).

Here is the Rasmussen Report as of August 2:

Like most Republicans, Trump has struggled to attract black voters, but this week’s surveying for the Rasmussen Reports daily Presidential Tracking Poll has found a bump in black support for the president. Even with the +/-9 margin of error for the smaller sample, it’s a bump that has held up nearly all week.

Therefore, this increasing support among one of the Democrats’ most reliable voting base must be quickly aborted using the most drastic methods possible. Presler’s efforts on behalf of Baltimore’s citizens is harshing the new media narrative.

There is some good news for those of us in California. Presler is coming in September. I hope he can help, before we devolve from the Medieval Period of public health to that of the Late Bronze Age.

The left cannot be honest about how incompetent and ineffective it is. It must always attack something/someone else to divert attention away from the real problems it will never solve. The left doesn’t exist to solve anything. It exists to perpetuate the left.

Would be nice if more people would wake up to this obvious fact.

The left and media hate this because they know how effective politically this can be. Moar Please!

“Amazingly enough, Mr. Presler is not the first one to come up with the bright idea of a neighborhood cleanup. It is not really that remarkable of a concept.”

No, you jerks. Cleaning up trash is simple. The difference is, he did it.

“Whatever he says his motives were, Mr. Presler’s presence in Baltimore reinforces the tired image of our failing urban cores.”

Am I missing something, most urban cores or cesspools, if they don’t like this then maybe residents should stop doing things which make their mostly shiftless urban core residents mess up those urban cores.

The truth is that urban cores are not the problem, those who populate them are the problem.

I think the media folks were just jealous of Scott’s gorgeous hair……especially the women.

Scott Presler sent me a sticker back in ’15 or ’16, along with a very kind note. He’s a nice guy and doesn’t deserve this sniping from the left.

So they have to snipe, or their deficiency gets the attention.

Scott, thanks for all you do!

Whatever he says his motives were, Mr. Presler’s presence in Baltimore reinforces the tired image of our failing urban cores.

Yes. And your point is?

Scott Presler didn’t curse their darkness – he lit a candle.

Hopefully, that will inspire enough people who actually live in those neighborhoods to continue the care for their neighborhoods.

Unfortunately, this is just an exercise in virtue signaling, as I doubt this will prompt the community or city to continue the effort. Makes for a great news story, though.

No, it is not virtue signalling, it is actual virtue. He did something good. I agree that it won’t cause a permanent change, but so what? Lighting a candle in the darkness is good even though it will go out in an hour or two.

Consider the market that the Sun panders to.

Just imagine if Scott Presler had been a brutha? Haha, he might have been arrested for theft of “public property” and charged with depraved mind–and then elected to public office.

He’ll, look at that hair. If he was a tranny and had a D next to her name they’d be pushing him to run for a Senate seat.

Maybe if he schedules an encore, some of the residents will join in.

However, I saw nothing to indicate that no residents participated this time; not from the Sun or the Baltimore city administration.

I sure hope Pressler made sure the clean up crews got their breaks and a full lunch break; there should have been several in that 12 hour shift. /sarc off.

What is it about the blue areas that create such psychosis?
If anyone sane had someone come and say “I’ll clean things up for free” they would welcome it.

Pressley asked for permission for dump trucks to deposit the garbage. He did not get a reply until he was finished. Permission was ultimately denied. Fortunately, he acted on his own and had dump trucks for the garbage. Can anyone think of something more dysfunctional than the government of Baltimore? I hope the voters notice this, and begin considering voting for the other party.

“Whatever he says his motives were, Mr. Presler’s presence in Baltimore reinforces the tired image of our failing urban cores. That the poor people in this dilapidated city can’t take care of their own neighborhoods and all the public officials around them have failed as well.”

Empiricism, the concept that propelled the Anglo Enightenment to world dominance, points to these conclusions being correct.

Liberals are angry their God of Government failed them.

4fun, they’re not angry their God of Government let them down. They’re angry someone pointed it out.

Can’t have “right wing extremists” looking like nice people who care now can they? Destroys the narrative.

Those “right-wing extremists” (libertarians on the right and conservatives in the center) sacrificed blood and treasure to conserve human and civil rights, and they are still doing it, albeit with less drama. That said, it is noble of Presler to speak and walk his principles.

Considering their decades of voting for the failures of Elijah and the Democrat party, perhaps the better name would be Baltimorons?

A principle and action to help people, and a role model to help people help themselves. How much effort would it require, if people in urban jungles would accept personal responsibility first, and shared responsibility second, for the health of their community? Do it for “our [unPlanned] Posterity”!

Recent studies show that 1 out of 3 liberals are just as dumb as the other 2.

“Nothing in this world can take the place of persistence. Talent will not: nothing is more common than unsuccessful men with talent. Genius will not; unrewarded genius is almost a proverb. Education will not: the world is full of educated derelicts. Persistence and determination alone are omnipotent.” Calvin Coolidge

It may be a tired, old quote but it still surpasses the trash spoken by the ‘woke’

Media plumbing the depths are lower than whale drakh.