Reporter lashes out at Ryan: “Her silence is deafening at this point.” 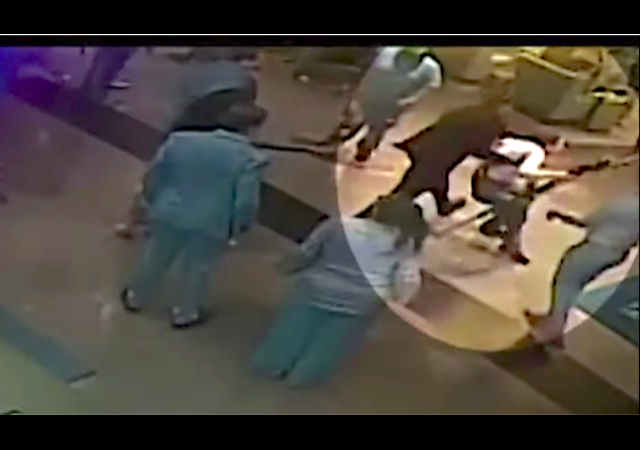 Ryan has not spoken about the incident. She has become one of the loudest voices to bash President Donald Trump over his words against the media. She has also contributed to the hyperbole that Trump’s administration presents a danger to the free press.

New Brunswick Today editor Charlie Kratovil accused Joel Morris of “violently” removing him from the event on August 3 at The Heldrich Hotel. From NJ.com (emphasis mine):

A criminal complaint dated August 19 charges 30-year-old Joel Morris of Country Club Hills, Illinois, with harassment, assault and theft. It alleges Morris took Kratovil’s arm and shoved it behind his back, injuring his forearm and shoulder. The harassment and theft charges stem from Morris taking the camera, according to the complaint.

Kratovil said a public relations firm had alerted him to Ryan’s appearance and invited him to attend the NJ Parent Summit. He said he received permission and arrived at the hotel, checked in and recorded other speakers for two hours without issue.

But shortly before Ryan took the stage, a man began to question his camera and his presence, he said.

In video of the incident, Ryan appears before the crowd and soon stops speaking. She pauses as a man comes up to the podium and then moves to the camera.

“What I will say, when I speak, I don’t have news covering my speeches,” Ryan tells the crowd.

“Don’t touch my camera,” Kratovil is heard saying. “Don’t you dare, put that down, sir. That’s my camera.”

The footage spins as the camera moves, sometimes going dark, at others catching glimpses of a lobby and the bodyguard.

“At that point, I had no choice” but to leave the room, Kratovil told NJ Advance Media in a phone call. “That camera is worth more than my car. I was able to retrieve it but was not able to avoid being attacked by this guy.”

Kratovil posted videos of the incident:

Ryan said she doesn’t “have news covering my speeches.” Kratovil stated that “other local reporters remained, and many people in the audience had taken out their phones to take photos or videos.”

“Her silence is deafening at this point,” he said. “It’s been two weeks. Anybody who’s a journalist should be condemning this.”

Kratovil hopes the criminal charges against her bodyguard will force her to say something.

This was more than just an assault on me.

This was an assault on freedom of the press, and @AprilDRyan should have immediately condemned the use of violence against a journalist. pic.twitter.com/botpX50uN2

The Society of Professional Journalists said:

As a first principle, it is never under any circumstances permissible for a person aggrieved at being photographed or videotaped to lay hands on the journalist, or attempt to take away the journalist’s equipment. This is a bright-line rule from which all journalists benefit, and which must be observed and enforced rigorously. Even in the event of a trespass (and Kratovil, a registered guest, was not a trespasser), the only proper recourse is to notify law enforcement, not resort to “self-help.”

Moreover, “ground rules” about the use of recording equipment at events to which members of the public are invited should be clearly spelled out, in advance, to all attendees. To the extent that recording is to be restricted, such restrictions should be uniformly enforced — or unenforced — among all attendees, regardless of their media affiliation.

While journalists may have no special rights superior to members of the public, they do not have fewer rights than others. A no-photography policy should apply to everyone. Nor should the perceived viewpoint of a news organization be regarded as grounds to deny admittance to a member of the media; people who make news do not have a license to dictate how and by whom they are covered. Those who believe they have been unfairly portrayed have the remedy of counter-speech, or if warranted, resort to civil legal remedies.

When an event is made accessible to public registrants, attendees inevitably will have, and will wish to use, personal recording devices. The SPJ of New Jersey encourages event organizers and speakers, wherever possible, to accommodate the journalistic recording of presentations of public interest, mindful that a verbatim recording is the most accurate representation of what was said, and that the lack of a verbatim recording will in no way prevent amateur “tweeters” from publishing after-the-fact recollections of varying trustworthiness.

Clarity about “the rules’’ serves everyone, regardless of who they are.

Ryan has used her criticism on Trump’s treatment of the press to surge into the spotlight. In August 2018, she claimed that Trump’s administration is “putting a target on our heads because we are asking questions maybe they don’t like.” She even wrote the book Under Fire: Reporting from the front lines of the Trump White House.

A free press for me, but not thee.

Why does a minor talking head on a barely-viewed network need a bodyguard? Unless she’s a hired thug of some sort, hired by other thugs?

Guy probably has a concealed weapon also. Obviously her life is way more important than anyone elses.

Because she is nothing but a pumped up street thug.

My thoughts, exactly. Ryan is an obnoxious and self-aggrandizing diva.

If Ryan’s hired security is from a state that requires licensure, a formal complaint to the state needs to be made and his license needs to be revoked. Being a bodyguard or a security contractor doesn’t exempt you from following the law.

Who the hell is April Ryan?

A red guard Maoist revolutionary posing as a CNN journalist.

She’s an overpaid, underintelligent, nasty propagandist for a sleazy leftist organization posing as a news broadcaster.

Her handlers order her to do treasonous acts, so she needs protection from the citizens who her handlers seek to enslave.

She is an unpleasant person of color.

The only color that moron is, is red.

My question exactly. Never heard of her before now.

Works for CNN, a major part of the Ministry of Propaganda and Agitation for the Democrat Party, and is part of the Nomenklatura.

Any one of those things would make her above the law and the Constitution. All of them . . . she had every expectation that everyone would grovel before her, like she has had all her professional life. And having her own Chekisti enforcing that is what her position deserves.

It is the new People’s Republic.

She’s still vulnerable to being sued in civil court. In this instance, she acted at the direction of her bodyfatguard. Both CNN and the fat lady can be sued.

I wonder who is paying the guard….

Probably george soros – via CNN. But, if Ryan sic’d her bodyfatguard onto the victim, both she and CNN are on the hook.

That’s not how it works. The bodyguard acts at her behest. If he was checking into who was being represented by the media, you can bet it was because she ordered it.

Another untouchable. Why are we surprised?

You confuse ‘untouchable’ with ‘unable to reach around her waist.’

Look if the guy assaulted sues, she will be ‘touchable.’ If we boot out the GOPe scum infesting our party, the likes of ryan will be touchable.

have you been paying attention to our judicial system lately?

Don’t fret. Nothing will happen to Ryan. She has membership in a few protected classes. Black, female, liberal, media, and perhaps more. As for the “security guard”, no one cares. The Dems/Progs have planets to save.

Probably felony assault and theft by taking. The body guard is extremely poorly trained. His proper recourse would have been to alert the event organizers if their was a breach of agreement between the event organizers and Ms. Ryan. Ms. Ryan’s recourse would have been to refuse to speak and not take or leave the stage. The body guard certainly should not have caused a disruptive, embarrassing, scene, on top of a crime. I certainly would press charges. I do not see Ms. Ryan as having much criminal or civil exposure, however the event sponsor and the hotel may have some degree of liability, but I do not see much in the way of economic damages, so going after them is not worth the effort.

this is the way it works in a communist country. if you are not part of the state-run media, in our case the democrat party-media complex, this is how you are treated.

I don’t give a d*mn what the “Society of Professional Journalists” thinks, but I noticed they did say one correct thing: “While journalists may have no special rights superior to members of the public”. The rest of that section is a bunch of special pleading and self-righteous garbage, but that one line is correct. Reporters are not special.

However, since “Ryan has used her criticism on Trump’s treatment of the press to surge into the spotlight. In August 2018, she claimed that Trump’s administration is ‘putting a target on our heads because we are asking questions maybe they don’t like.'”, she should be held to her own made-up rules.

What on earth are people objecting to here?

probably your opening sentence. That’s why I downvoted you.
April Ryan, a journalist, who has been loudly complaining about journalists allegedly(?) being under attack by the Trump administration, is responsible for an ACTUAL physical assault on a journalist.
Her silence, her hypocrisy, is breathtaking

Yes, it is. But how does that make the victim’s claims any more valid, or him any more deserving of sympathy? They’re both wrong. She’s a self-righteous privileged jerk who thinks having a bodyguard puts her above criticism, and he’s a self-righteous privileged jerk who thinks he’s better than everyone else and an attack on him is worse than one on anyone else.

You’re the idiot. What part of the quote I provided was unclear? Here it is again:

This was an assault on freedom of the press, and @AprilDRyan should have immediately condemned the use of violence against a journalist.

Is that in my mind? It’s what he wrote. He thinks he’s better than everyone else and an attack on him is worse than one on anyone else. He said so explicitly.

Bodyguard is from Country Club Hills IL; I know it well there is no country club and there are no hills. Just at one time a sleepy little town that recently became infested with Chicago thugs. Most of the caucasians left. Now its a shithole, murder, drugs, filth, vacant stores. Stunning transformation in a couple decades.