After launch of two projectiles into East Sea, North Korea announces it has ‘new weapon’

After launch of two projectiles into East Sea, North Korea announces it has ‘new weapon’

A North Korean official stated that South Korea’s attempts to maintain peace talks would make “boiled head of a cow [fall into] a side-splitting laughter.” 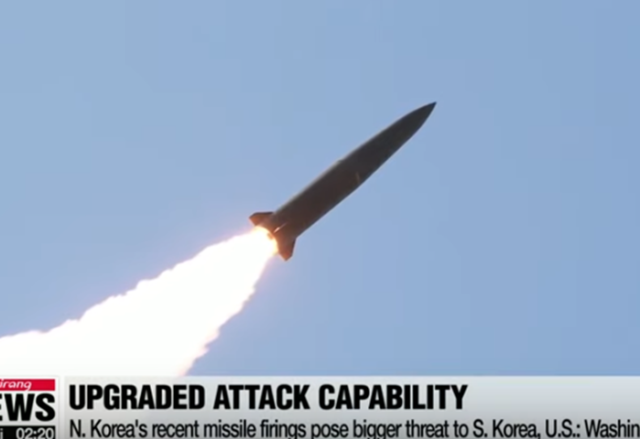 North Korea fired two more projectiles into the East Sea, further raising tensions on the peninsula, and the South Koran military indicates that it is now analyzing the projectiles and maintaining high levels of readiness.

This is the sixth time the North has fired projectile weapons since July 25, and the eighth time since the beginning of the year. North Korea has defended the launches as being within their rights to self-defense, and heavily criticized the South for condemning the launches.

The North, which had halted missile tests since November 2017, began launching projectile weapons, including short-range ballistic missiles, from May 4.

The May 4 launch was followed by another on May 9. The projectiles launched on the two occasions are thought to be KN-23 missiles.

North Korea officially announced that it has tested a “new weapon” after these two missiles were launched.

The national defense scientists showed a perfect result in the test-fire, too, and helped cement bigger confidence in this weapon system.”

Friday’s firing came six days after North Korea flew two projectiles believed to be short-range ballistic missiles, though the North said later it tested a “new weapon.” It also was the sixth such launch since late July.

North Korea has carried out weapons tests in recent weeks in apparent protest of the ongoing joint military exercise by South Korea and the United States, which it sees as a rehearsal for invasion.

In a statement, the North questioned the meaning of dialogue when “even at this moment, South Korea continues its joint military exercise and to speak of a peaceful economy or a peaceful regime. It has no right to do so.”

In an extended attack on President Moon, the statement continued: “We even question if his thought process is sound when he mentions ‘talks’ between North and South while playing out war scenarios that plan to destroy most of our armies in 90 days.

“He truly is a shameless man.”

Moon is still attempting to maintain a dialog, though it did not seem to be well received.

Moon, in a televised speech on Thursday, said a momentum for dialogue remains alive despite the series of “worrying actions taken by North Korea recently” and called for Pyongyang to choose “economic prosperity over its nuclear program.”

The spokesperson of the North’s Committee for the Peaceful Reunification of the Country said Moon’s comments would make a “boiled head of a cow [fall into] a side-splitting laughter.” The spokesperson also criticized South Korea’s recent acquisition of advanced U.S.-made fighter jets and said it would be “senseless” for Moon to believe that inter-Korean dialogue will automatically begin after the end of the ongoing U.S.-South Korean drills.

Any chance China has something to do with it?

No chance that it does not.

If you play with fire long enough, eventually you’ll get burned.

It’s called the Sea of Japan. Only the Japan-hating Koreans call it the East Sea.

China doing the old puppet jerk move. Those tariffs must be getting to them.