Meanwhile, the North Koreans release another detained student and revamp their negotiating team 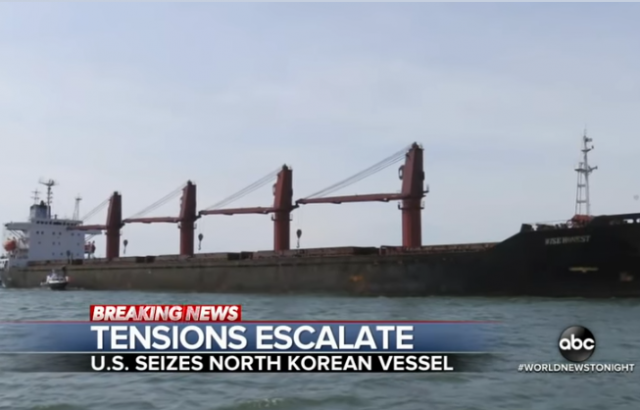 We have been following the news about the North Korean shipping vessel that violated American law and international sanctions and was subsequently seized by the U.S. The last report noted that the North Koreans were complaining to the United Nations about the action.

Now, the parents of Otto Warmbier have filed a claim for the cargo ship, arguing that it could serve as part of their $500 million judgment against the country.

A federal judge awarded the family more than half a billion dollars in a wrongful death suit against the North Korean government, according to CNN.

North Korea never took part in the lawsuit or settlement discussions, with Warmbier’s family “left to chase down the assets of North Korea to recover what they can for the torture and death of their son at the hand of North Korea’s dictator,” the outlet notes, citing court documents.

The Wise Honest, the seized vessel, may be one of the few assets currently available for the settlement.

“We are committed to holding North Korea accountable for the death of our son Otto, and will work tirelessly to seize North Korean assets wherever they may be found,” Fred and Cindy Warmbier said in a statement.

The seized ship was used to transport coal from North Korea that was sold in other countries, including China, the Justice Department said in May. The US and the United Nations have said that North Korea has used illicit sales of its coal to fund the country’s nuclear weapons and ballistic missiles program.

In a statement at the time, senior Justice Department officials called the seizure the first of its kind, and said it was part of the US campaign of “maximum pressure” against the North Korean government.

Meanwhile, A 29-year-old Australian student detained in North Korea has just been released.

Alek Sigley ― one of a handful of Westerners living and studying in North Korea ― disappeared without a trace around June 23, prompting a week of deep concern and frantic speculation about his fate.

For days Sigley’s family received no word about his whereabouts or wellbeing, stoking fears he may be the latest in a long line of foreigners to become entangled in North Korea’s police state.

Then, with little warning, Australian Prime Minister Scott Morrison on Thursday told lawmakers that Sigley had “been released from detention in the Democratic People’s Republic of Korea” and that “he is safe and well”.

Interestingly, the North Koreans have a new negotiating team in place for future discussions with U.S. officials, and the new members are much more familiar with America.

On his way back to Washington, [US Secretary of State Mike] Pompeo confirmed that their counterparts would be officials from North Korea’s foreign ministry. Although he did not specifically mention the names of the officials, it is widely speculated that U.S. top diplomat is referring to Ri Yong-ho, North Korean foreign minister since 2016, and Choe Son-hui, first vice minister of foreign affairs.

The transition from United Front Department to the foreign ministry in North Korea’s main negotiating team has several important implications. The failed Hanoi summit, in which the leaders of the U.S. and North Korea walked away from the talks without reaching any agreement, may have underlined the need for North Korea to establish a team that knows the U.S. better, according to some experts.

That isn’t great for the US. Trump needs to conspiciously overlook past stuff to make progress with Kim.

Kim needs to make amends. Give into him on this, and we go back to the old, losing playbook.

There’s a reason Kim is meeting with our president. And that president ain’t obama or jimmy carter.

It won’t work. You have to make the deal appealing to Kim and the generals he’s got to pay off with favors. Getting US courts involved is a nightmare.

Single sticking point strategy – de-nuke and the sanctions come off and you get development and can run your country the way you want.

I get that the Warmbier family is angry but they should leave their law suit just for now (actually I think they would be better off chasing BarryO for being so shit at dealing with the Norks to get their son back to start with).

Also good news there is a new team coming who may understand America better although I’m wondering if their miscalculation from Hannoi wasnt more a case of them listening a bit to closely to some BarryO shit in the background??

No that was all China, Kim is a figure head all the power is projected through lower level people of Chinese control and descent.

It would make a great bass boat in Texas.

Whenever the grab an American, there should be immediate punishment, and if they hurt of kill, each stage of such should lead to a few orders of magnitude increase.

Most young people lack common sense, and they acquire more with age.

What is tragic is when some tin horn dictatorship makes sure that the learning process ends.

I figure anyone stupid enough to go to N Korea deserves whatever comes their way.
This isn’t some new surprising change in behavior of the dictator. So don’t be surprised if your fanny gets womped womped and you end up trying to lick crayons as a major life goal.

The Norks “revamped” their negotiating team alright. S. Korean reports state they were executed by Kim after the failed Hanoi summit.