Secretary of State Pompeo: China’s leading energy firm “knowingly engaged in a significant transaction for the purchase or acquisition of crude oil from Iran.” 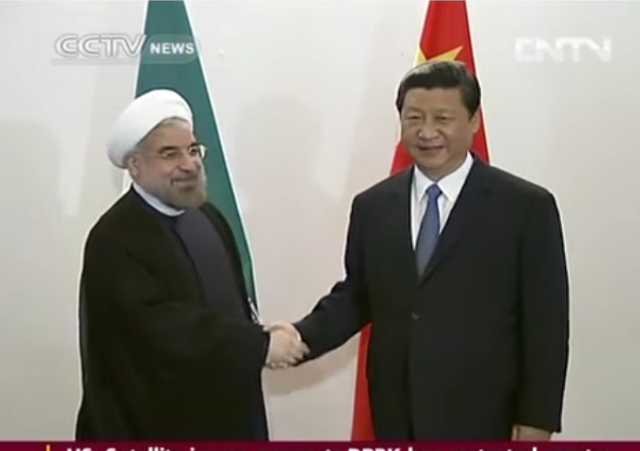 “As part of that maximum pressure campaign, I am announcing that the United States is imposing sanctions on the Chinese entity Zhuhai Zhenrong and its chief executive Youmin Li,” Secretary of State Pompeo told reporters on Tuesday.

China is hoarding cheap Iranian oil in violation of the sanctions. “Tankers are offloading millions of barrels of Iranian oil into storage tanks at Chinese ports, creating a hoard of crude sitting on the doorstep of the world’s biggest buyer,” the Bloomberg confirmed.

The Reuters reported the details of the U.S. measures against Chinese state-owned company:

“We’ve said that we will sanction any sanctionable behavior, and we mean it,” Pompeo said in a speech in Florida in which he announced the move.

It comes amid increased tensions between Iran and the West as well as between the United States and China, which have been engaged in a major trade war.

U.S. President Donald Trump’s administration has stepped up its sanctions against Iran after breaking from a nuclear pact brokered between Tehran and other Western nations under the previous administration of President Barack Obama.

In a later statement, Pompeo said Zhuhai Zhenrong “knowingly engaged in a significant transaction for the purchase or acquisition of crude oil from Iran” after the expiration of a U.S. sanctions waiver covering China on May 2.

In the wake of U.S. sanctions, European countries, too, have halted their oil imports. The European Union, however, has launched a payment mechanism to enable Iranian oil imports to resume. The EU-backed payment system aims to conceal the incriminating money trail, thereby shielding European companies and banking institutions from secondary sanctions under the U.S. law. The success of the newly-launched Franco-German payment mechanism is yet to be ascertained.

The Trump administration has responded to the EU and Chinese measures by called for a global coalition to isolate the Iranian regime. The U.S. is working to build an alliance comprising of European, Asian, Middle Eastern countries to “push back against the world’s largest state sponsor of terror,” Secretary of State Pompeo said recently.

With its own oil exports collapsing, regime’s key source of revenue, Iran has been attacking foreign crude shipments in Persian Gulf waters. By continuing to buy Iranian oil, China is directly financing Tehran’s state-sponsored terrorism and its military adventure on the high seas.

The oil sanctions against Imperial Japan worked real well, too. The drift to war with Iran seems inevitable. If it comes, Trump will lose 2020, and we will get a totalitarian socialist dictatorship.

Hey, why don’t we try what the Lightbringer did: send them pallets of cash for some promises they won’t stick too?

I love your predictions. Doesn’t spell out any biases inside your head at all. /s

XYZ: ex-most favored nation; why? Because you’re a snake; Xi? Yeah, you, Xi.

Xi is betting that Trump will be gone after 2020. The problem is that the Chinese economy is cratering as companies (and capital) flee. Very bad idea for Xi to quit negotiating at this point. He is already negotiating from a very weak hand which will get much weaker when Trump is re-elected. Especially if a lot of RINOs are primaried with their opponents winning on Trump’s coattails.

One more year of this crap is about all I can take.

I think you are right on, and not many people are wise to this. Tarrifs are causing manufacturers to leave for nearby Asian nations or Mexico.

That is the part of the math libertarians always fail to consider, corporations don’t have to pay the tariffs. They can pull up stakes and move to a tarifed-free country.

Also, warehouses in Long Beach and LA are overflowing with Christmas season inventory that was ordered earlier to dodge the tariffs before they went into effect.

That is why government-controlled economies just can’t compete against capitalist economies. It is one of the many stark inefficiencies. Their economic models are stuck in one gear. Ours simply adjust on the micro level. China cannot win this trade war.

Despite what that general said the other day about how we gave it all away to China, we DO have plenty of high-end manufacturing capacity to quickly ramp up production from drawing board to battle field. So we hold ALL of the strong cards in this poker game. And we finally have a leader who knows it and is willing to play them.

Wait! The EU, full of our NATO allies, is seeking to circumvent the sanctions on Iran by making it possible for them to buy Iranian oil? Interesting. Someone tell me why we need to keep protecting them through NATO? Because it sure looks like they’re siding with Iran and against the United States. In fact, that’s exactly what they’re doing.

The EU knows their capital cities would burn if they actually went along with the sanction against Iran.