Trump: “If anybody taxes” the U.S. tech giants, “it should be their home Country, the USA.” 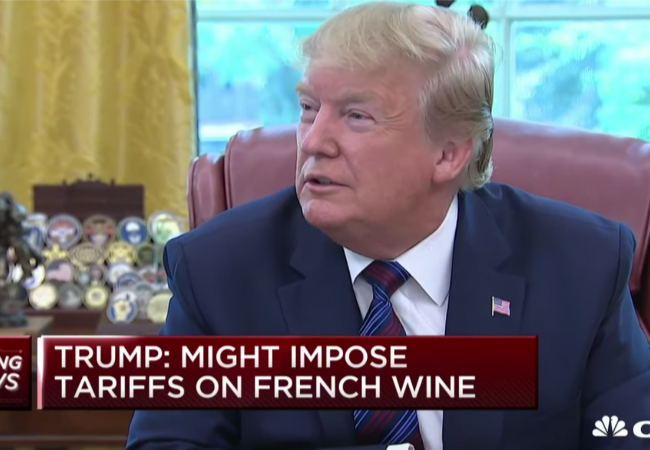 President Donald Trump is considering tariffs on French wines in response to the digital tax imposed by Paris that disproportionately targets U.S. tech companies. Earlier this month, the French Senate approved a 3 percent tax on sales generated from digital services in France by companies with more than 25 million euros in French revenue and 750 million euros worldwide.

The French measure unfairly targets U.S. tech companies, the Trump administration says. The tax, to be retroactively applied from January 2019, is expected to generate $400 million for the French government this year.

President Trump slammed French President Emmanuel Macron for levying the new tax, promising “a substantial reciprocal action on Macron’s foolishness” on Twitter. “They shouldn’t have done this,” President Trump told reporters. “I told them, I said, ‘Don’t do it because if you do it, I’m going to tax your wine.’ ”

Trump had told French President Emmanuel Macron last week that he was concerned about the proposed digital services tax.

“If anybody taxes them, it should be their home Country, the USA. We will announce a substantial reciprocal action on Macron’s foolishness shortly,” Trump tweeted on Friday. “I’ve always said American wine is better than French wine!”

Later in the Oval Office, Trump told reporters the tax decision was wrong and he threatened the key French export.

Trump and Macron spoke by telephone on Friday and discussed the tax and next month’s summit of the Group of 7 rich nations in France, the White House said.

Macron’s office said the French leader “underlined that the G7 summit would be an important opportunity to move towards a universal taxation of digital activities, which is in our common interest, and which we need to keep working on in order to obtain a broad international agreement.”

The French government is alarmed by the prospect of higher tariffs on French wines, the country’s second-biggest export. “Please do not mix the two issues,” French Economy Minister Bruno Le Maire said Saturday. “The key question now is how we can get consensus on fair taxation of digital activities.”

More than 20 percent of all French wine produce is sold in the U.S., according to the trade body Federation of French Wine and Spirits Exports. In 2018, country’s wine exports to the U.S. exceeded $3.6 billion in sales.

President Macron does not want to limit the tax to France alone. He vowed to push for a global digital tax at the G7 summit, to be hosted in France next month. President Trump has rejected the French notion of taxing American tech firms operating abroad. “If anybody taxes” the U.S. tech giants, “it should be their home Country, the USA.” Trump said.

The French move could be a test case for a digital tax at the European Union-level, German public broadcaster Deutsche Welle suggested. Austria, Spain and the UK are also planning to impose similar taxes, the broadcaster added. President Trump’s tough stance towards France could deter a EU-wide tax regime targeting U.S. firms.

notamemberofanyorganizedpolicital in reply to faboutlaws. | July 29, 2019 at 12:54 pm

France is left with no fine whines……..

This is incredibly stupid on Trump’s part. One, if the sales are in France then what reasonable argument is there against it? Two, large U.S. tech giants are the enemy of democracy and freedom. They attempt to steal elections at home and abroad, and provide direct aid to the most murderous and tyrannical regime in the world, aka Communist China.

Mark Zuckerberg was boasting how his company refused pro-life ads before the vote in Ireland. He’s literally pro-infanticide. And Trump wants to defend him?

Exactly. France is putting a higher tax on the companies making more money than anyone else. decreasing the inequality. And Trump, the friend of the rich and powerful and disillusion-er of the poor and middle class is fighting it. “but it’s ok cause trump uses words that are easy for me to understand. Trump 2020!”

Kinda my thinking here as well. It’s entirely reasonable for a country to tax or not economic activity that takes place within it’s borders. Doesn’t matter if the company one is purchasing from is not based in the same country as the purchaser, once a good or service crosses over from one country to another that country it’s going to gets to have some say in the matter. I get that this is Trump trying to protect US jobs and companies but he might just be being a bit overzealous here.

Tax everyone doing business in your country, which is fair. Macron set up a worldwide sales figure to specifically tax American companies. What does Google’s sales in the US have to do with France?

Exactly.
The truth seems lost to some people. This is Macron targeting American companies.

Next UP: “France TAXES Sunlight!”

Fine, tax business done if France, but what does worldwide revenue have to do with it? The reason worldwide revenue is part of the deal is not to tax French and European companies. As much as I despise Google and Facebook they are American companies and they are being unfairly targeted. Trump is right.

mrboxty,
I’m with you. Literally last week we were talking about the big tech companies as enemies of democracy. I say let the French tax them. Plus the EU is working on a bill to penalize them for hate speech. That’s some delicious leftist irony right there.

This type of action will encourage the creation of small US-only tech companies, which may help to create some competition.

Google and FaceBook are already planning on stealing 15 million votes in 2020 for the Party of their choice. Guess which one that is.

notamemberofanyorganizedpolicital in reply to MattMusson. | July 29, 2019 at 12:56 pm

Smalltownoklahoman et al – you are confusing sales tax and tariffs. If the foreign company must pay to the host country, that is a tariff. If the customer pays, it’s sales tax. The purpose if tariffs is to make a foreign nation’s products more expensive to the population of a host country.

Ultimately, the consumer pays the tariff through higher prices charged by the company (so they can cover the tariff), so it’s a distinction without a real difference. The company often absorbs the increased cost in the short-term, but in the long run, consumers ALWAYS pay all company costs for ANY company, or they go bankrupt.

Not always. Current US inflation is 1.5% in spite of Trump’s tariffs on China and others. Goods can be bought from non tariff countries, or the export country can devalue their currency.

Macron sees taxing US tech companies as a source of revenue. Taxes on doing digital business is a protection racket. Nothing else.

Maybe it will make French wines cheaper in Europe?

But for those of us here in Europe we can buy excellent Aussie wines cheaper than French wines. We can also buy American, Chilean, Argentinian, Spanish, Portuguese, Italian German, Austrian, Slovakian, Hungarian, Romanian, Bulgarian Serbian, Croatian, and many more countries wines which are better than French wines.

It helps if your a wino!

A Texan in Slovakia who summers in Croatia….and my Croatian neighbor sells me his homemade Croatian red, fresh from laying in an oaken barrel for many years, poured into glass 5 liter decanters…If not for autocorrect you wouldn’t be able to read this.

…I’m imbibing it just now and since lunch.