“They can make a protection claim, if they would like, in Guatemala. So, if they arrive in the U.S. not having availed themselves of that opportunity, they will be returned to Guatemala.” 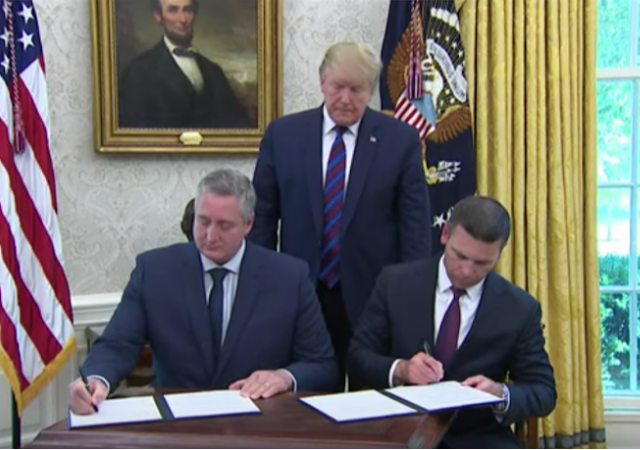 President Donald Trump announced that his administration reached a “safe third country” deal with Guatemala to help relieve the pressure at the southern border.

Guatemala agreed to allow migrants from El Salvador and Honduras to apply for asylum in the country instead of the U.S. border. In return, the U.S. agreed to expand a guest-worker program with Guatemala.

The agreement would require that migrants traveling through Guatemala on the way to the U.S. seek asylum in Guatemala instead of at the U.S.-Mexico border. President Trump joined Guatemala’s interior minister, Enrique Degenhart, and Homeland Security Secretary Kevin McAleenan in the Oval Office to sign what White House officials said was a safe third-country agreement.

“They can make a protection claim, if they would like, in Guatemala,” Mr. McAleenan said. “So, if they arrive in the U.S. not having availed themselves of that opportunity, they will be returned to Guatemala.”

Mr. Trump said the agreement will help address “the crippling crisis on our border.” He added that the U.S. and Guatemala now “get along.”

Trump threatened tariffs and sanctions on Guatemala unless the country’s officials agreed to help with migrants.

Refugees International President Eric Schwartz slammed the agreement because “Guatemala is in no way safe for refugees and asylum seekers.”

Guatemala has a murder rate five times than the U.S. However, the agreement does not mean that the migrants have to stay in Guatemala. McAleenan clearly said that if migrants come to the U.S., but did not apply for the protections, they would go back to the country.

The Trump administration and Guatemala did not provide details on how they will implement the agreement. Guatemala’s Congress, which is on a summer recess, must approve any deal between the two countries due to a ruling from the Constitutional Court.

“So, if they arrive in the U.S. not having availed themselves of that opportunity, they will be returned to Guatemala.”

WRONG! They will arrive in the US, slip past our porous border, and become one of 40,000,000+ invaders … procreate like bunnies and produce a crop of bona fide citizens.

The anchor tautology. Well, baby steps. Perhaps the judges will finally discover principles and defend the civil rights of American principals: the People and our Posterity.

And a federal judge has already ruled that Trump’s interpretation of the law is illegal. Nobody will get shipped back.

Another step to emigration reform that will mitigate the progress of immigration reform at both ends of the bridge and throughout. That said, it sounds like Guatemala has decided to stand, not kneel, and America will contribute in a good neighbor protocol. El Salvador has also acknowledged a need for emigration reform to serve and protect her native population.

Dear dumocrats, liberals, illegal aliens and their supporters, et.al… if my family members from northern europe can’t hop a plane, land in the US, not worry about CBP, get welfare and a job, simply because they are white and come from Europe by plane, then you have NO right to the same privileges just because you can walk up to our national border…

The interesting thing is how exposed the facts are. On one side you have a huge push by Trump to elevate nations via their legal systems and respect each other’s borders and security. Its a diplomatic push to create a reasonable regional reciprocity between nation-states representing their people’s interests and the collective well-being of the neighborhood. Quite a powerful Liberal concept and current battle plan. A successful regional stability means more jobs and prosperity for each nation’s citizens. This is basic Liberal 101. Liberal Democratic Peace Theory in the last two decades has been replace however with the Democratic Peace Theory which is a much different assertion.

Then on the other side of reality we have a “strange” and dominating social narrative claiming that all efforts to control immigration and create particular international agreements for that purpose are “racist”. We have a 24/7 media cycle calling Trump’s immigration plans “unAmerican”, “white supremacy”, “bad for business” while amplifying assorted idiocies like demonizing ICE and making border control comparisons to the Holocaust.

We have a global and domestic elite surrounded by financially groomed special interests and media promoting illiberal promises to open borders, make everything free and add millions to Democrat registration.

Funny thing is that buried in today’s news is a report from Spain that trashes the Paris Agreement and supports exactly what Trump claimed about it. The US primarily, along with the UK made real promises while the system allows South Asia and India, Pakistan, Russia, China and many others to pretend they were promising reductions.

What is exposed by all this more than ever before is a signature posse of wealthy and powerful people using their assets and employees to drive a deeply illiberal political message as they attempt to deconstruct Liberalism.

What they have in mind fragile 1% GDP, corporate courts and trade agreements, constant conflict and a re-balancing of global power which protects the elite while controlling society as it approaches 11 billion. It has been 60 years since that most mediocre English writer,)as the BBC describes him, published 1984. Would Orwell see Trump as the face of Big Brother, or the last effort of Liberal Democracy to save the nation state from the coup of the few?

Trump is Emmanuel Goldstein. The problem for the Left is that Trump is real…and they know it. Their attacks are beyond frenzy and more than border on psychotic.

We do not need more guest workers depressing wages in construction and service industries.