If I were a Democrat watching tonight, I’d be deeply depressed. 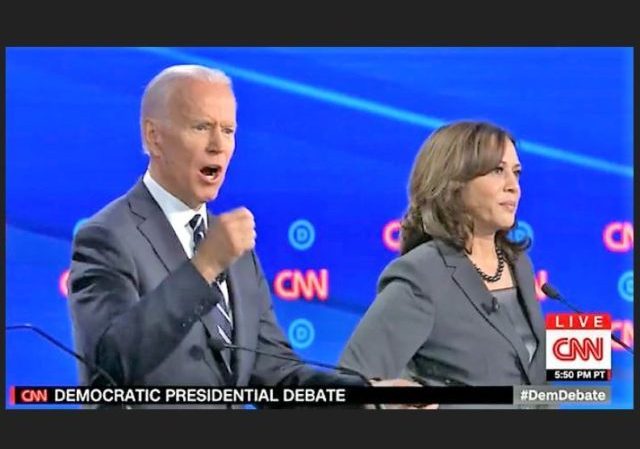 I guess Joe Biden won tonight’s debate because he was awake, didn’t slur his words too much, and double-talked his way out of numerous attacks by reminding everyone he used to work with Barack Obama.

Biden got a big assist from Kamala Harris, who proved that her intellect is a mile wide and an inch deep, and that her electric moment attacking Biden in an earlier debate was a one-off. Tulsi Gabbard ripped Harris on her record as a prosecutor, and Harris never addressed the specific charges against her.

But most of all, this was sleep-inducing. It was so sleep inducing that at one point Kirsten Gillibrand was caught off guard when asked a question, as if she was napping, and didn’t know what the question was. So she mumbled something about Trump.

When she was awake, Gillibrand did what she does best: embarrass herself.

Biden says to Gillibrand: "I don't know what happened except you're now running for president" pic.twitter.com/yfAeWHyGyH

It made last night’s debate seem, by comparison, riveting.

There also was a weird vibe of candidates attacking Obama policies, particularly deportation, as a way of attacking Biden.

These candidates are attacking Barack Obama’s policy positions more than Donald Trump. That is politically stupid and crazy.

Ok. Let me get this straight. Democrats hate Obamacare AND hated his immigration policies? What planet are they from?

If I were a Democrat watching tonight, I’d be deeply depressed.

Biden “won” by having Gabbard take on Harris…

Just a note, I don’t normally watch the commies debate each other, but I watched this one.

The clear winner? Trump. By a mile. Every democrat is crazy.

Decline of the Democratic party is similar in some respects to how some people slide from being working productive citizens being somewhat deranged homeless people. The party is in that death spiral, one where they screw up at nearly every turn, and become increasingly irrelevant. They are nearly to the point of defecating on the streets.

And who could have ever imagined they could outdo Debate #1?

There is a Trump Rally Thursday, which is a much needed palate cleanser from 2 nights of #DemDebate. It’s in Cincinnati! https://www.donaldjtrump.com/rallies/

Debate #2 is now over, mercifully.

I watched the whole thing.

Thank the Lord I was drinking, heavily.

I can’t stop laughing about how much they ran away from Obama.

These debates are sending a big red flag for the fake news media and they are either missing it or working hard to extinguish it. Obama is possibly even more toxic than Hillary and maybe even Trump.

I think the CNNs are hoping against hope that the Wookie gets into the mix before the Hillary insanity gets started. But reminding people about the Obama years only forces the fake news media to expose it’s true nature. They need to solidify their candidate ASAP. The commies are already going after them and will take them apart for hiding Obama’s failures. CNN has just exposed the weakness that will take them all down.

I am sure most of the clown car commies are upset at how manipulated this has been already. It’s not only the Google censorship but the widespread coordination across the media. Only a total moron would be so blind to not see how rigged the process is. Trump has been pointing it out for years so it’s a much bigger problem for the Dems. They need to put TDS aside for now and confront the fake news media to put them out of business.

Tough pill to swallow for the uniparty complex but unless they believe they can get 20 million illegals and dead people to replace their traditional base voters fleeing the party, they are doomed. I’ll be there is a well-worded poll revealing the true nature of voter disgust and it makes Trump look unbeatable.

Of course, this would mean the commies probably succeed in taking over the Democratic Party by 2024. The GOP needs to be purged too to make sure people have a choice once Trump is gone. We can’t have two fringe parties dominating in a rigged election system.

Notice the Tulsi Gabard ad on this site.
Maybe you should go around saying nice things about the other candidates and get them to put up ads too.

I didn’t watch. I’m already over my quota of gawking at the dumpster fires and train wrecks for this month.

But I can see the flames and smoke and it will be covered in the media – though I think CNN is trying hard to forget.

They should have Fox News do one.

Joe Scarborough may be right but it was Obama who created these people. Each politician, like each baseball or tennis player, exists in his or her own time. They’re promoting policies Obama would have wanted but realized the political limits of his day. He went as far he could given the political realities. And Obamacare was merely a stalking horse for “single payer,” the polite term for socialized, centralized medicine.

Joe looked slow (age will do that to you).

The Jamaican looked dumb and angry as ever.

Tulsi was cute, though!

You are correct.
I tried to watch.
I absolutely could not take it.

Makes me truly happy I cut the cable a few years ago.

I just hope Booker was able to contain all that testosterone this evening.

Great name for a band.

Booker Lo-T and the MGs

I don’t know, the R’s can be pretty absurd too. Remember when Bush I was trying to overwhelm Dukakis with tales about how many times he’d recite the Pledge of Allegiance every day? What a weirdo.

Of course that was just one ridiculous person; the D’s have a whole team of them here. So I have to give them credit for that.

It is scary to think that one of these people could be president.

Booker’s insanity for the night was that the Russians suppressed the black vote in Michigan in 2016:

I remember the Russian tanks rumbling down Woodward Avenue that day.

Brian Williams was riding the lead tank because he wanted honest news.

and they all lost to Hillary who lost to Trump.

Bet they are hitting the Russians up for some actual intervention.

Replace did with looks…

Nah. The Dem Base is brain dead. They see all of these folks as surefire winners. (to somebody) This is the problem when you form coalitions; it’s difficult to focus and for one to rise to the top.

It’s too soon but in the meantime they’re damaging themselves. The winner will be the one who takes the least damage, that the media approves of and that donors will give money to.

In the end, it may be that Michelle Obama takes the stage after all the others fail.

Tulsi Gabbard hammering the former girlfriend of the California King Maker was letter-perfect. When continually hammering Kamala Harris over her blocking of exculpatory evidence that would free an innocent man from Death Row, Harris’ counter “I have ALWAYS been against the Death Penalty” was hubris raised to infinity.

Whilst it is doubtful she will be the Democrat Nominee (“Mike” and Hillary are still waiting in the wings), she would be a tough debater against Donald Trump.

Having said all that, I still won’t vote for her due to her other wacky, neo-Socilist ideas.

That was a great segmentally enhanced by the split screen. Did Tulsi strike a deal with Joe?

Gillibrand is so desperate its painful to watch. She has 0 shot at the nomination yet continues to throw desperate virtue signaling bombs in the hope that someone will notice her.

All the while she is shredding any remaining threads of a reputation she may have once had.

My take was that Gabbard won her audition as Joe’s VP pick. However I think there’s still a better than 50% chance that Michelle swoops in at the Democratic Convention and wins the nomination by acclamation. By next summer all the current Democrats will be well beyond their sell-buy date and Michelle will be the new shiny thing for the useful idiots who vote Democrat. I hate to admit this, but I suspect all 5 of my children would vote for her because…feelings.

Sorry. Accidental down vote, and you can’t change it (hint, hint LI- please address).
I, too, fear she might butt in, but at the same time hopeful and praying she and the worst president in my lifetime are burrowing in a bunker awaiting Barr’s and Horowitz’ findings.

Remember Gabbard attacked Harris about a week ago, too, between the debates. I agree, it’s to be a Biden – Gabbard ticket. Among that field it’s hard to see how they would not be nominated.

M. Obama has never run for anything in their life. (avoiding anything gendered here …) I see no reason to think she could do it. Trump did it but you’re comparing polar opposites in terms of what they’ve accomplished in life.

All Barack did prior to being elected POTUS was to release Jack Ryan’s “sealed” divorce records to local media during the U.S. Senate race in Illinois. I lived there during that time and met Jack Ryan. Had those divorce records not been released, and Ryan withdrew to spare his disabled child from awful publicity engineered by his ex-wife, Ryan would have won. That is the ONLY thing Obama accomplished before launching himself into national office. The Obama machine is despicable and ruthless.

I’ve reached a conclusion: Gracie Allen, and the platform of the Surprise Party made more sense than any of this collection of embarrassments.

I had the impression that CNN did it on purpose to embarrass her, to make life tough for Harris / Gillibrand and help Biden / Gabbard.

I guess they and the Democratic power brokers figure Biden has the best chance to beat Trump. It’s a little awkward that Obama doesn’t seem to like Biden, but he may get over that once Biden is nominated. After all they smiled together for 8 years and he probably didn’t like Biden any better then.

Not a far step to being sad from their normal delusional state of mind.