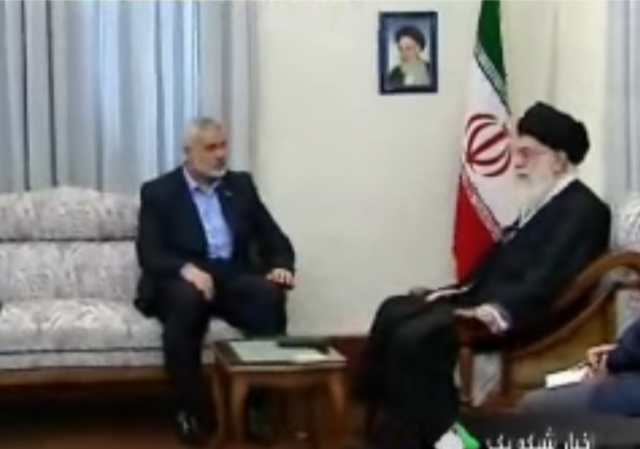 Amid rising tensions in the Persian Gulf, the Islamist terror group Hamas has sent a senior delegation to meet Iranian officials in Tehran. The Gaza-based terrorist group was “expecting important results” from the weekend meetings, Hamas leader Ismail Haniyeh said.

Since Hamas took control of Gaza in 2004, the Shia Islamic regime of Iran has increased its financial and military support for the Sunni terrorist group. Hamas is apparently looking for more funding and support from Iran. In a bid to please Tehran, Hamas is seeking to reestablish ties with the Iran-backed Bashar al-Assad regime in Syria.

The delegation to Tehran is headed by Saleh Arouri, the founder of the Hamas’ military wing, al-Qassam Brigades. Arouri, responsible for several terrorist attacks on Israeli soldiers and civilians, has admitted his involvement in the 2014 kidnapping and murder of three Israeli teenagers. The U.S. State Department has placed a $5 million reward for his capture.

The Times of Israel covered the details of the talks between the terrorist group Hamas and Iran:

Hamas leader Ismail Haniyeh said Saturday that a delegation of senior officials from the terror group had arrived in Tehran for a visit.

Haniyeh was mum about the purpose of the mission. The delegation was headed by the leader of the group’s military wing in the West Bank, Saleh al-Arouri, the Maariv news site reported.

“The visit will go on for a few days. We’re expecting important results,” Haniyeh said.

According to the London-based publication Middle East Monitor, described as a pro-Hamas outlet by the BBC, a Hamas delegation met with Iranian officials in Beirut on Friday at the Iranian embassy.

The delegation, which according to the report includes Hamas’ Lebanon representative Ahmed Abdel Hadi, met with the special aide to the President of the Iranian Shura Council, Hossein Amirabdollahian, and briefed him on “the latest developments” and reactions to the US peace plan.

Despite the raging Shia-Sunni feud in the Middle East, Hamas never severed ties with its paymasters in Tehran. According to a senior Hamas defector who left the group recently, the Gaza-based terrorist outfit was spying on Israel on behalf of Iran. “Hamas was working for a ‘foreign agenda,’ selling information about Israel to the Iranians in exchange for financial assistance,” British newspaper The Indepedent reported, citing Suheib Yousef, a former Hamas operative and son of terror group’s co-founder Sheikh Hassan Yousef.

Much like the Iranian regime, Hamas seeks the destruction of Israel and the Jewish people. Hamas’ official charter calls for a genocidal jihad against the Jewish people. Last week, a senior Hamas leader, Fathi Hammad, called on the Palestinian Arabs to kill Jews around the world. “You have Jews everywhere and we must attack every Jew on the globe by way of slaughter and killing, if [Allah] permits,” he said.

With tensions mounting in the Middle East, Iran has reiterated its threats against Israel. “If the US attacks us, only half an hour will remain of Israel’s lifespan,” Mojtaba Zolnour, a senior Iranian national security official said recently. Destruction of Israel, the sole Jewish state in the world, has been Tehran’s obsession since the days of Ayatollah Khomeini.

Regardless of their Shia-Sunni blood feud dating back to the founding of Islam, both Hamas and the Iranian regime are united in their hatred of Israel and the Jewish people. While Iran has established itself as the leading sponsor of Islamist terror in the world, Hamas wants to remain its top jihadi recipient.

Video: Hamas calls for the mass-murder of Jews worldwide

No good will come from this.

Since Iran, and the palestinians call for mass murder, they should be given a taste of such. I really do not believe that these people can be salvaged.

“Important results” will be very large explosions on Iranian soil.

They’re believing the “advice” STILL being told to them by john kerry. What a traitor.

Us Jews should send their own delegation to Tehran in solidarity to Hamas Iran . Thinking Schumer Cardin Lyiing Dick Bunenthal Meathead Seinfeld Rambo and brod Schiff Fat Jerry Collins Sanders Cohen Jakob Tapper Wolfe and on and on and finally Juussy.

Down to their last allies: Hezbollah and Hamas. One Shia, the other Sunni. Both nothing but terrorists being propped up by the Mullahs robbing their own citizens.