Reports indicate enhanced geologic activity through California and across the nation. 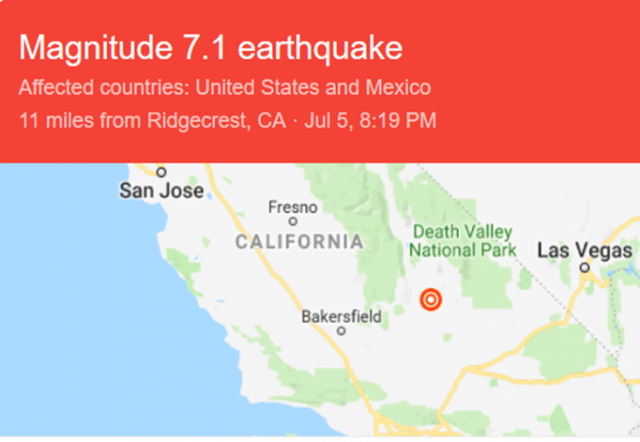 A second major earthquake hit the Ridgecrest area of Southern California Friday night.  This quake was approximately ten times larger than the shaker that hit on Independence Day.

The 7.1 magnitude earthquake that rocked Southern California on Friday night rattled buildings, fractured roadways and left residents on edge, but did not cause any fatalities or major injuries, officials said.

California’s second major earthquake in less than two days struck near Ridgecrest, a Mojave Desert town about 125 miles northeast of Los Angeles. The same area was rattled by a magnitude 6.4 earthquake, the largest in nearly two decades, on the morning of July Fourth.

The Friday night earthquake was about 10 times larger, seismologists said. Shaking was felt as far away as Phoenix, Las Vegas, Baja California and Reno, according to crowd-sourced data on the U.S. Geological Survey.

As with the July 4th quake, the damage was mainly localized around the Ridgecrest area.

Kern County spokeswoman Megan Person said officials were responding to multiple reports of injuries and fires. Power outages were reported in and around Ridgecrest and the nearby community of Trona was without power.

Caltrans spokeswoman Terri Kasinga said that as of 8:45 p.m. PST Friday no highway damage had been reported. “It’s too soon to tell,” she said, but crews are surveying the highways.

Some residents of Ridgecrest, a town of about 28,000, were too fearful to sleep inside their homes, choosing instead to spend the night on their driveway or sidewalks, said Ridgecrest’s Mayor Peggy Breeden.

As the earthquake struck a little after 8 pm, several sporting events were halted for obvious safety concerns.

Scientists place the odds at a 1-in-10 chance that another 7.0 quake could hit within the next week.

Interestingly, there are indications other areas of the California and the country are becoming more active geologically.

Black tar releases have expanded beyond the bounds of the La Brea Tar Pits, and locals are remarking that it’s the worst they’ve seen.

A large puddle of tar encroached on the sidewalk and natural gas appeared to rise from the street of the Miracle Mile in Los Angeles Friday.

…Resident Natalie Vota stopped to document it Friday and Saturday.

“This is the worst I’ve seen,” she said Saturday.

Farther south, in the Lake Elsionore area, there are reports of new releases of tar.

A black and sticky tar-like substance has residents in one Lake Elsinore neighborhood trying to determine where it is coming from.

“I come out here everyday and look. It started out a couple of blobs here and there, and we were gone for two days and when I came back out, this was right along in here and it just keeps oozing this way,” said Mario Maldonado.

The black material is just behind Maldonado’s backyard. He said shortly after a Valentine’s Day storm, he noticed the ground began to ooze.

“After we had the rain, the last set of rains it eroded all the banks here, and this started coming out because it was buried at some point,” said Maldonado.

On a national level, geologic activity in the Yellowstone area seems to have picked up, as the geysers in the park have been historically active.

The Steamboat Geyser at Yellowstone National Park is no Old Faithful.

The world’s tallest active geyser — whose major eruptions shoot water more than 300 feet into the air — is known to be unpredictable. But if there was ever a year to witness Steamboat’s spectacular surge of water, this might be it.

We’re just over halfway through 2019 and the Steamboat Geyser has already erupted 25 times, according to the US Geological Survey. That puts it on track to surpass last year’s record of 32 eruptions — the largest number ever recorded in a year. The record before that was 29 eruptions in 1964.

Clusters of small earthquakes were picked up in the vicinity from October 2018, and continued unrest has led authorities to push the alert up one level.

The new yellow alert states the volcano is showing signs of “elevated unrest”.

As a safety professional, I recommend that people evaluate their emergency preparedness plans and supplies. Strap yourselves in, it looks like it’s going to be a bumpy year geologically as well as politically.

Oil and tar seeps are pretty common in southern California. Beach sand is commonly stained in dark veins. The aptly named Tar pit beach for being one subtle example.:P

When I was a boy some 65 years ago, my grandmother would take us to swim at Santa Monica beach. She always brought along a jar of kerosene to scrub the tar off our feet; it seeped up all along the beach. There’s plenty of tar here just below the surface, & it seeps up in lots of places.

Now I’m living in Carlsbad, just above San Diego; I felt the quake last night, it was a slow roller that lasted around 2 minutes. It did no damage but made me wonder if it was going to be “the big one.” It’s a very strange feeling when the whole house is swaying like it’s a boat on the water!

This from the linked Lake Elsinore article seems relevant: “He and his neighbors believe an old farm container buried long ago when the area was covered in walnut groves cracked open, causing the substance to leak out.”

Climate change? It’s responsible for everything else…

I am pretty sure that Trump’s tanks that he had going down DC streets caused the earthquakes. It is probable that the vibrations from so many tanks traveled through the earth’s crust and loosed one of the faults under SC. There should be an investigation as to whether Trump knew this would happen in which case, he should be charged with murder.

Maybe. In MY opinion, it was the wham-wham-wham of pile drivers someplace in NYC, setting the basic foundation for another Trump building, carrying through to the west coast, and down to South America to cause the tsunami. I have a liberal arts degree, so I know all about this sort of thing. Or something.

You are joking, but some lefties have long been arguing that oil pumping and fraking increase geological activity.

I was in LA during the earthquake. Zero damage.

He and michelle obama were in town, and they happened to use the toilet at the same time.

Was in San Diego-felt nothing!

I used to live about 5 blocks over and 6 blocks up from The La Brea Tar Pits. Translated from the Spanish, that’s “The The Tar Tar Pits”. (No relation to Zezu Pitts.)

Oddly, one very well-to-do community in Southern California is called Tar (Brea). One not so well off is in the Central Valley. it’s called Lard (Manteca).

Your translation is funny. Have you heard of the The Angels’ Angels of Anaheim?

Looks like the whole Ring of Fire areas are, well, heating up.

California’s governor has been pretty belligerent, but he now has his hand out. Any aid delivered should first have that high speed train scam money deducted.

They just need to change the so-called “rainy day” fund to “holy crap we just had an earthquake” fund. He proclaimed they had a surplus,,,,,,

Why should we give aid to a hostile foreign country?

Was in San Diego. Felt nothing. Again.

7.1 is just a teaser. Call me when it breaks off and sinks.

Will the populous of SoCal take this as a warning and be prepared for any eventuality? Nope.

All of my neighbors are standing by with crowbars and pry bars to help split it off along the fault.

In all seriousness, I’m glad there have been no fatalities so far. Hopefully that keeps up through this.

Except for a small town at the epicenter, it was a nothingburger – except as hype-grist for the news media.

Slow news weekend..except for the fact that the elite media is trying to ignore the Epstein arrest story.

I was watching the Dodgers game when the first one hit. The Padres pitcher didn’t even back off the rubber and nobody called time. I don’t know how anybody could throw OR hit a ball under those conditions, but the teams played on.

I was 245 miles east in Henderson Nevada and we felt it. At first I thought I was having the big one because if felt like dizziness or what it feels like right before you pass out. My feet were moving one way, my head another, my bottom (in a chair) another way. It lasted about a minute. A mile away my sister had things fall over in her house, wine glasses were jiggling, and her grandfather clock actually stopped at 8:20 (PST).

Still and all it’s Trump’s fault (that CA didn’t break off and become an island nation of misfits).