Ross Perot Passes Away at Age 89

Ross Perot Passes Away at Age 89

“Obviously a great family man, wonderful father. But at the end of the day, he was a wonderful humanitarian. Every day he came to work trying to figure out how he could help somebody.” — Ross Perot Jr. 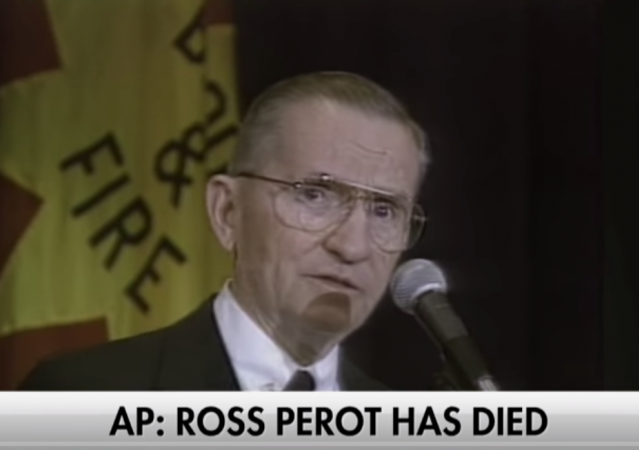 Ross Perot, a seminal figure in 90s politics passed away at the age of 89 Tuesday after a five-month-long battle with leukemia, according to the Associated Press.

Perot was a self-made billionaire known outside of politics for his extensive philanthropy work.

Despite his efforts to highlight the possibility that American fighters may have been left behind in Vietnam and financing a commando raid to rescue his employees held in an Iranian prison in 1979, Perot was most widely known for his White House runs.

He mounted a strong presidential run in 1992 against President George H.W. Bush and his Democratic challenger, Bill Clinton.

Spending $63.5 million of his own money, Perot bought 30-minute television ads in which he employed large charts and graphs to make his point about the US economy and trade issues.

He was known for his catchphrase the “giant sucking sound,” referring to American jobs that would head to Mexico because of NAFTA.

Perot, running as a third-party candidate, managed to win 19.7 million votes and was blamed by some Republicans for siphoning votes away from Bush to the benefit of Clinton.

His run four years later wasn’t as successful and he managed to get only 8 percent of the vote.

He delivered newspapers from the back of a pony during the Depression.

He later graduated from the US Naval Academy and got a job in 1955 at International Business Machines, where he became a top salesman.

The Dallas Morning News has a great obit here.

Too bad the US is hooked on the uni-party system. Ross was the best candidate that year – made the most sense with his charts and common sense approach. He would have made a great president. RIP, American patriot.

notamemberofanyorganizedpolicital in reply to walls. | July 9, 2019 at 4:39 pm

Except in today’s Trump World, that Giant Sucking Sound
we hear is the Uni-Party and their Hollywood, Big Tech and other assorted Foreign Agents going down!

He wasn’t a candidate at all. When it looked like he might actually get somewhere, he dropped out of the race. His only reason for getting in was to screw Bush and elect Clinton. He tried the same thing in 1996, although by then people were wise to him.

GW Bush was a lousy candidate and a very mediocre president. Perot arose just as Trump did: from GOPe corruption and failure. Bush should have waltzed past Perot and Clinton, he gave us Bill Clinton, who gave us hillary clinton.

IMHO, Trump is standing on the shoulders of Ross Perot.

I’m sorry, I put a thumbs up in agreement and it changed it to the ? Marks

Well, everybody stands on the shoulders of everybody – even the likes of Einstein.

That said, Trump is an original. His only ‘connection’ to Perot is to buck the establishment. Lots of candidates (both left and right) have done that, but they failed to gain traction. Trump survived an onslaught that Perot never could have.

This is correct. Perot blazed the trail for Trump.

In the late 1970’s I was a trainee at EDS in Dallas. Ross Perot stood in line at the cafeteria with the rest of us. He felt like cutting in line was a dishonorable act. Even though he owned the place, he stood in line with people like me.

He was giant that opened my eyes to the curse of the Democrats and Republicans, but I was too young and stupid to vote For him, I voted Clinton . I was fascinated by his charts and actually thought Trump should do the same.
What a shame, he should have been President

I had wished he would have campaigned for Trump

he also had true war hero as VP and media went unchallenged (although iirc dennis miller defended him in early to mid 90’s) when mocking stockdale due to hearing loss.

Thoughtless comment, given GHW’s war record. Whatever else he did in life, you can’t denigrate his WWII service.

show me where I denigrated bush service or shutup.
And since bush was not pow in vietnam while stockdale was you should have been able to tell which “war hero” I was thinking of.
smarten up before mouthing off.

He split the vote and Clinton got elected.

Bush lost the election and gave us Clinton.

Many conservatives have made the case that Perot siphoned as many or more votes from Clinton.

“Read my Lips” did himself in.

Long time ago… barely remember his platform. I was fed up with Bush, knew I did not want Clinton. Read Perot’s book and later brought it with me to Sweden. It sits on the shelf somewhere. I voted for Bush in the end.

I liked Perot pumping his own money into wind power but really hated his insistence on corporate welfare for alternative energy.

Perot was a character.

The very sad thing is that the likes of Perot and Trump are the exceptions. The likes of Jeb! Bush and boehner and ryan and mccain and mcconnell are the norms.

Boehner is now a lobbyist for the Marijuana industry

I was never a fan of Ross Perot, and that is still the case today. Despite his populist bluster Perot was a big government leftist on many important issues. He talked about balancing the budget but was vague and contradictory on specifics. Perot’s plan to cut the deficit by raising gat tax 50 cents per gallon and 5 cents per year after that was deranged and would have wrecked the energy industry and the economy without making a dent in the deficit. His position on controlling entitlement spending was – flexible – and depended on who he was talking to that particular day. He supported expanding Medicare for all Americans, but had no coherent plan to pay for it. He supported gun control and abortion. Perot’s positions on education were gauzy feel- good dreck short on specifics. Only on the issue of illegal immigration did he take what I thought was a sensible position (he was against illegals crossing the border with impunity), and given his taste for big government liberalism I don’t know how long that would last.

In short, Perot was a big government leftist who avoided making hard spending choices. I am no fan of Bush the Elder and certainly not Clinton, but in 1992 I think Perot would have easily been the worst of the three.

Check this out and decide for yourselves:

RIP, but you gave us Bill Clinton, twice.

He was all ears.