Prime Minister Johnson Vows Brexit With “No Ifs Or Buts”

Prime Minister Johnson Vows Brexit With “No Ifs Or Buts”

“The British people are tired of waiting. The time has come to act.” 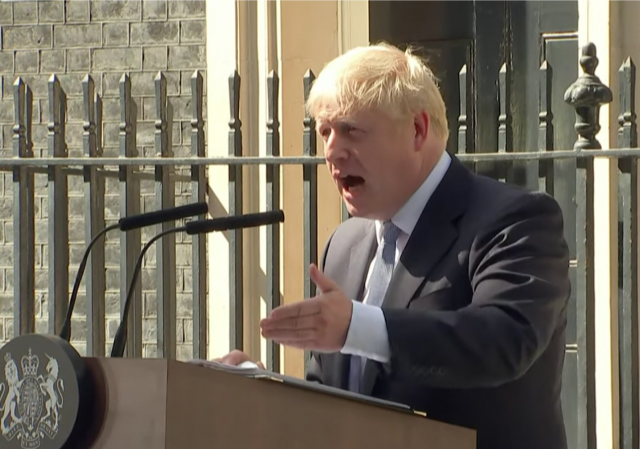 Newly-appointed British Prime Minister Boris Johnson has vowed to take his country out of the European Union within the next 99 days.

“We will come out on 31 October, no ifs and no buts,” Boris Johnson said in his first public speech as prime minister on Wednesday. “The British people are tired of waiting. The time has come to act.”

The prime minister warned that the UK will withhold 39 billion pounds (or $49 billion) in a “divorce settlement” imposed by the EU if Brussels refuses to offer better terms than the ones on the table.

“Don’t forget that in the event of a no deal outcome we will have that extra lubrication of the £39 billions,” he added.

Britain will leave the EU “no ifs or buts” by October 31, new Prime Minister Boris Johnson declared today as he unveiled his vision to re-energise the country.

Standing in Downing Street, he vowed to strike a new agreement with Brussels in just 99 days – if not he would seek to take the UK out of the European bloc with No Deal.

“After three years of unfounded self-doubt it is time to change the record, to recover our natural and historic role as an enterprising outward-looking and truly global Britain,” he said.

In typically colourful language, he continued: “No-one in the last few centuries has succeeded in betting against the pluck and nerve and ambition of this country. They will not succeed today.”

On Brexit, he vowed that the UK will leave the EU in just over three months’ time, despite Brussels showing no signs of being willing to change the Withdrawal Agreement and a majority of MPs, including dozens of Tories, believed to be determined to stop a No Deal.

This line-up is in sharp contrast to PM May’s Cabinet, which excluded most of the pro-Brexit Conservative MPs. She campaigned to keep Britain in the EU in the run-up to the 2016 referendum.

Brexit Party leader Nigel Farage remained skeptical despite the change of guard in 10 Downing Street. The Farage-led Brexit Party came out victorious in the UK’s European elections in May, winning 32 percent of the vote, as compared to just 9 percent secured by PM May’s Conservatives.

“Theresa May told us 108 times we were leaving on March 29 and we didn’t, so just because Boris says we’re leaving on the 31 October doesn’t mean we’re going to,” he said. “I don’t believe a single word the Conservative Party tell us.”

President Trump had expressed support for Johnson during the leadership contest within the ruling Conservative party. The Tory contestant was an “excellent” choice who “would do a good job” as a likely successor to PM May, he said last month. PM May was forced to step down after three years of failed negotiations with the EU, and her party’s slipping popularity among voters.

“No Deal” is the best deal the UK can get. They should just take it and leave the EU in the lurch.

Junkers threatens punishment? Then, the Royal Air Force should do a couple of fly-bus over the EU headquarters. At least one should be at speeds that break the sound barrier.

“There are a lot of pretty glass windows you’ve got there in Brussels. Be a shame if they all got shattered with a sonic boom.”

Britannia Rising. Someone has to counter the Huns once again.

The linked article quotes the co-founder of UKIP, NOT JUNCKER, who CLAIMS that Juncker intends to “punish” and “make an example” of the UK.

Juncker never said anything remotely like that. So for LI claiming that Juncker openly (!!) threatened to punish the UK is appaling reporting.

PMCA wrote: “The linked article quotes the co-founder of UKIP, NOT JUNCKER, who CLAIMS that Juncker intends to “punish” and “make an example” of the UK.”

I see that you have removed the whole rambling section from the article, which is a good thing. It contained little more than heavily biased editorializing on part of the writer of the article, along with the misquoting of an already massively biased source. The current version of the article at least sticks to facts.

They will probably need to cut loose Northern Ireland to do it – if so, no great loss. That’s the step that May was always the most frightened of. And if Scotland wants to break off too, good riddance. Bunch of drunk socialists. England will be a lot better off on its own.

There is no problem with a hard exit and Ireland, except what the Irish leadership are making.

Prior to entering the EU, the UK and Ireland entered into an agreement which mandates a soft border between North Ireland and the Republic of Ireland. This should not change, if the UK leaves the EU. It would be sort of like the situation between the US and Mexico under NAFTA. And. such an arrangement would be exceptionally beneficial for Ireland and North Ireland. It would hurt some direct shippers from the rest of the EU, though. Of course, the UK would be able to negotiate any trade agreements with individual EU members that they want. And, that is the problem. If the unelected EU leadership become superfluous, they lose their phony-baloney jobs and a huge amount of money.

“Prior to entering the EU, the UK and Ireland entered into an agreement which mandates a soft border between North Ireland and the Republic of Ireland.”

What the hell are you even talking about? The before Good Friday Agreement of 1998 the border between NI and the Republic of Ireland was the most policed and militarized border in Europe since the end of the Cold War. At that point (1998) both countriesm the UK and Ireland, had been EU members for more than 25 years already.

That’s the step that May was always the most frightened of.

Her successor will have the same problem.

If the UK were to abandon Northern Ireland it would lose its last shred of honour. That would be worse than staying in the EU. And it would justify a violent Unionist rebellion, just as would happen if the US were one day to decide to give Arizona away to Mexico.

The PM has already stated that there will be no hard border imposed by the UK between NI and the rest of the UK.

Now that leaves the ball in the EU’s court to attempt to impose a hard border which would be incredibly hard for the EU to justify.

Indeed. A lot of people seem not to understand that just because there’s a border doesn’t mean you have to enforce it. If the UK chooses not to enforce its border with Ireland it doesn’t have to. It’s the EU, not the UK, that has been threatening to start enforcing that border, but making out that somehow this will be the UK’s fault. “Look what you’re making us do”, sort of thing. The simple answer is “We’re not making you do anything; it’s your choice”.

It’s not that easy. The EU can’t simply not choose to not enforce the border due to WTO Most Favourite Nation rules. In the absense of a comprehensive FTA, all third countries must be treated the same.

If the EU collects no tariffs on UK goods and does not implement the phytosanitatry controls etc. then it must offer the same kind of access to EVERYONE ELSE. This would essentially spell the end of the single market, arguable the EUs most successful project.

The EU doesn’t “impose” any borders. The borders are the automatic result of the UK leaving without a deal and they are the same borders that every third country has to deal with. It’s not am imposition by the EU but a direct consequence of the UK deciding to leave the single market, which is the very thing that allows there to be no hard borders.

NI doesn’t need to he cut free. Indeed it shoujdvt be cut free as it’s not the problem the left Hope’s it is.

No people should ever be ruled by someone named Jean-Claude.

A good start. But Boris is also talking amnesty. Not good!

British people are sick of ‘elites’ that aren’t particularly elite.

They’ve been told for years that they needed to let smart people make the decisions. Only it turns out that not only are the political elites NOT smart, they’re frightfully stupid.

They thought that they could string them along, schmooze with the EU unelected elite, purposefully make Brexit as painful as possible, ‘negotiate’ a deal they knew damn well was never going to pass, and then throw up their hands and pull a ‘poor us, what do you want us to do, leave with no deal?’

Yes, that’s exactly what they want.

Theresa May never wanted Brexit, everything she did was designed to make Brexit so painful that they could force another vote, and then there would never be a vote again.

Johnson will actually force a no deal. That’s the entire reason he was elected.

The British people are so sick of the elites that they elect the New York born, Eton educated, extremely wealthy son of a family of career politcians named Alexander Boris de Pfeffel Johnson to save them from the “elites”. Yeah, that makes sense.

“No people should ever be ruled by someone called Jean Claude.“

I’ll believe his promises when he actually implements them, and not before. Too many disappointments from UK politicians.