The investigation had over 500 interviews. 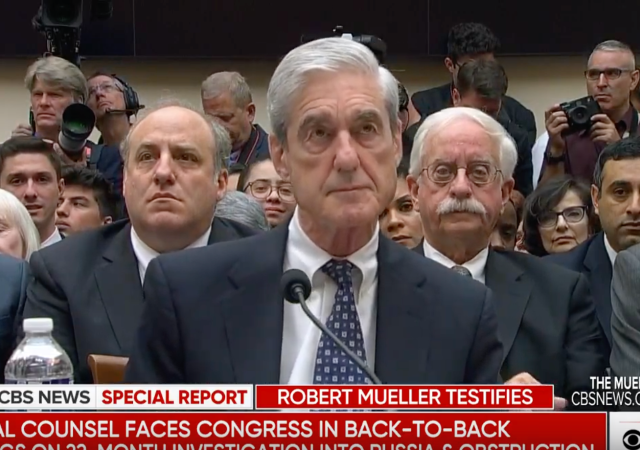 Robert Mueller’s investigation performed over 500 interviews over the course of two years.

However, Mueller, who was in charge, told Congress he did not participate in many interviews.

[email protected]: “How many of the approximately 500 interviews conducted by the special counsel did you attend personally?”

So the question is how much did Mueller take part in the whole investigation? I tweeted out that Mueller’s body language looks to me like a kid dragged out with his parents when he would rather be at home playing video games.

Others have noticed Mueller’s appearance:

Sad that Democrats put Mueller in this position https://t.co/C5DjCq5Oso

.@PeteWilliamsNBC on Mueller's testimony so far: "The years have clearly taken a toll on the Bob Mueller we used to see, and I think that’s affected his ability to be as facile with answering the questions, as perhaps both sides wanted him to be." https://t.co/m9KGQtpbkx pic.twitter.com/jD3DPbFs9x

What we learned from the #MuellerHearing – Mueller had little knowledge what was in the report. The investigation and the report were the work of the 19 Trump-hating Democrats who made up his "team". Mueller was just the pretty bauble on top to give the appearance of fairness.

Of course Mueller was just a figurehead lending his name and former reputation to this effort to depose the duly elected President of the United States.

He testified that Trump could be indicted after he leaves office. Wut?!?!?! Were there grounds to recommend indictments or not? I think it is Mueller who could be indicted and now that he has left office, why don’t we do it? We can hang him and his pal Comey at the same time.

I can’t wait for the campaign season to start. I have a feeling that other than Al Green and Adam “ibby da!!” Schiff, Dems will have amnesia about the Russia hoax. We’ll just have to remind them.

The ‘setup’ on that is a nice juicy bit of cheese that should provoke at least one stupid Dem candidate for president to bite.

“Vote for me and I’ll prosecute Donald Trump when he is driven from office!”

One thing that is fairly unique about the US among nations is a general reluctance of our judicial system to prosecute former presidents for things they may have done during their terms, for fear of looking like some of the tin-pot dictators who throw their predecessors in jail on trumped-up (sorry) charges. Looks like the Dems want to cross that line.

“”Looks like the Dems want to cross that line.””

Maybe not right away, given Obama’s apparent involvement in Hillary’s illegal activities, among other things.

I don’t know about how Mueller looks in the photo that you have here, but the guy behind him with a mustache looks like a Dr. Seuss character.

Come to think of it, Dr. Seuss explains the Democrats’ line of questioning. They’re looking for Green Eggs and Ham, but only finding spoiled, tainted, and rotten meat.

Give him a top hat and you have the Monopoly Game character.

Barr, where are you? Mueller et al. belong in prison for the rest of their lives.

“We’re getting impatient. We want them to move, or at least reassure us that they are moving. It doesn’t mean that they have to indict someone tomorrow, but we want to be sure that they’re investigating with the goal of potentially prosecuting people, you know, we don’t need another IG [report].” – Tom Fitton, Judicial Watch, regarding the possible Barr/Durham investigation into spying on the Trump Campaign and FISA court abuse.

Put a fork in it

Former Special Counsel Robert Mueller confirms his investigation was not curtailed, stopped, or hindered at any point.

Yet somehow, according to Mueller, Trump wasn’t exonerated and can be prosecuted after his term ends.

Someone needs to remind Mueller that he wasn’t hired to exonerate Trump but to determine if there are grounds for indictment. He found none. That is all that matters. To keep insinuating that Trump might be guilty even though his investigation came up empty is legal malpractice. He shouldn’t even be making any comments beyond “we found no evidence of obstruction of justice”. PERIOD!

I look forward to the articles / books that will be written about the differences between all that the media attributed to Mueller and what he actually said and did.

It’s no wonder Mueller was reluctant to testify. He really has nothing to say. He should have just offered to read his report aloud and left it at that. Schooling a roomful of political fools, regardless of species, is a waste of an old man’s time.

The next report will have naming rights, like sports stadia.

Slightly off topic: I think Mr. Moustache, behind Herr Müller, looks quite distinguished. And, toward the end, very angry.

Mueller testified that most of the lawyers were internal transfers onto his his team. I don’t recall anyone asking him who was responsible for selecting the transfers. That might be something that needs brought to light.