Looks like he no longer has interest in becoming a martyr. 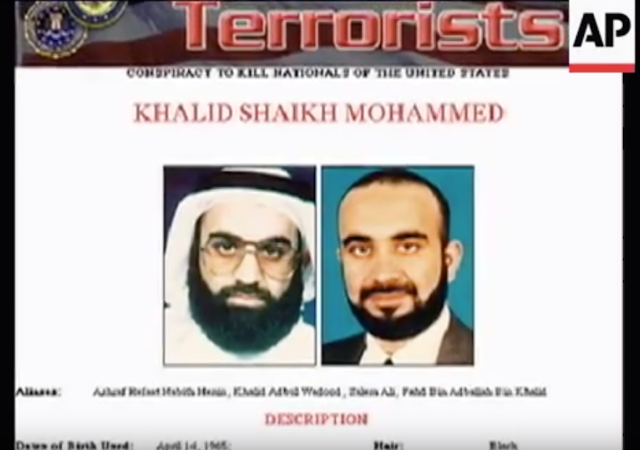 Khalid Sheikh Mohammed, the alleged man behind 9/11, said he might help the victims’ lawsuit if the federal government does not seek the death penalty. From The Wall Street Journal:

Mr. Mohammed’s offer was disclosed in a Friday filing in the victims’ federal lawsuit in New York, which accuses the Saudi government of helping coordinate the 2001 suicide attacks that claimed nearly 3,000 lives when terrorists crashed hijacked airliners into the World Trade Center, the Pentagon and, after passengers resisted, a Pennsylvania field. Riyadh has denied complicity in the attacks.

Separately, President Trump signed legislation on Monday that funds medical claims from victims of the Sept. 11 terrorist attacks for the rest of their lives.

In the lawsuit against Saudi Arabia, plaintiffs’ lawyers had contacted three of the five Guantanamo detainees accused in the Sept. 11 conspiracy to request depositions. In the Friday filing, a status letter to U.S. Magistrate Judge Sarah Netburn, the lawyers wrote that earlier Friday Mr. Mohammed’s counsel told them their client wouldn’t consent to a deposition “at the present time.”

But the lawyer said that “the primary driver” of this decision is the “capital nature of the prosecution” and that “[i]n the absence of a potential death sentence much broader cooperation would be possible.”

Mohammed sang a different tune nine years ago during a hearing in Guantanamo Bay. When the judge called Mohammed’s case “a death-penalty case,” Mohammed declared it as a “martyr case.”

Mohammed wanted the United States to make him a martyr.

A person close to the happenings in Guantanamo Bay said that the people involved in 9/11 have changed a lot in the past ten years. These men no longer have any interest in becoming martyrs:

In 2017, the Defense Department official overseeing the proceedings, Harvey Rishikof, began exploring a potential plea bargain with the Sept. 11 defendants that would exchange guilty pleas for life sentences.

Mr. Rishikof is said to have been concerned that the prosecution had been undermined by the torture inflicted upon Mr. Mohammed and other defendants at secret Central Intelligence Agency facilities overseas—an issue that has mired the case in years of pretrial hearings and raised the possibility that a military or federal court could sanction government misconduct by barring the death penalty.

After word spread of plea discussions, Mr. Rishikof was fired by then Defense Secretary Jim Mattis for what Mr. Mattis said were unrelated reasons.

However, lawyers who represent Mohammed and others allegedly involved in 9/11 claim the court cannot use the statements from the suspects:

The attorneys, according to the New York Times, argue the FBI and CIA intermingled their work while extracting statements from the suspects at secret prisons and later at Guantanamo Bay.

The newspaper reports none of the statements CIA agents got out of Mohammed from 2002 to 2006, following alleged torture such as waterboarding and sleep deprivation, could be used in court. During that time, the lawyers say, the FBI was feeding questions to the CIA.

One lawyer, Cheryl Bormann, claimed that while the FBI conducted the interviews, “the CIA continued to influence or control the detention of the suspects.” She said, “There was no separation. It’s all one big team.”

Nothing the POS can do for any of the victims, nor do any care for his “help”.

If it were up to me he would be tortured first, to encourage the others.

Ya mean the 72 doe-eyed houri virgins, each with a set of huge breasts, delivering goblets of wine, in Jannah (Islamic paradise), no longer has any appeal?

I wonder if Barr’s announcement last week of picking up the pace of federal executions had anything to do with this “rethinking?”

Maybe he found out the 72 virgins all look like Helen Thomas.

Funny how this POS was fine with young men killing themselves as well as thousands of innocent Americans, but fears his own life being shortened. Osama was like that too. All for jihad, so long as others do the suicide, while they get to live longer lives.

No wonder the left like them so much. The hypocrisy runs strong in both groups.

I heard it was raisins.

Why, after 18 years, is this mass murderer still drawing breath?

No. Execute this POS

They were engaged in war against us. So here we are again with
Law-itis. the German spies that came on shore during WWII were summarily shot.

That’s what needs to happen to this subhuman.

Memo to SCOTUS, et al.: The Constitution is NOT a SUICIDE PACT.

the German spies that came on shore during WWII were summarily shot.

Sorry, not so. Two batches of four, landed in Florida and New York, were rounded up and tried by a secret military tribunal (per executive order of FDR). All were sentenced to death by electrocution, including the two who had contacted and alerted the FBI in the first place. The sentences of those two were commuted to life and 30 years. Not much of a reward for making it possible for the FBI to find the other saboteurs.

Two more Germans (spies this time rather than saboteurs) were landed in Maine in 1944 and apprehended immediately, but by then things weren’t so overheated and they were merely imprisoned.

It’s a great idea. Let him cooperate fully. Then kill him.

I think he’s asking for the assurance first. Which is not even worth considering.

The only reason for not summarily executing an illegal combatant is if he has knowledge that can be extracted and help win the war. This guy’s knowledge is out of date, so snuff him without fanfare.

Now why would the government be interested in such an offer?

Starting with a lit magnesium ribbon running the full length of his urethra. This virgin horse crap is one of the most juvenile things I have ever seen. These clowns need to die knowing that there will never be a virgin for them.

Let’s not forget that KSM also killed Daniel Pearl. He deserves the death penalty, and I am quite sure that anything he said at this point would be a pack of lies anyway.

I would go with his original description: make him martyr.

Otherwise it’s trusting him, which is totally out of place. And if he doesn’t trust us, that’s fine, we’ll end it for him as planned.

Why would the US government be interested in this offer? What’s in it for the US? Even assuming the lawsuit is not as frivolous as it sounds, how is it in the US interest for it to succeed?

Isn’t it amazing what incentives can do.

We have unprecedented cooperation from Mexico and Guatemala, because we’ve threatened tariffs. Before then, it was impossible to get them to do anything.

We have an unprecedented request from KSM, because we’ve reinstated the death penalty and he is facing it. Before then, he is not known to have proposed any help.