“The victim was dismembered, and his body parts were thrown into a canyon after one of the defendants allegedly cut the heart out of the victim’s body.” 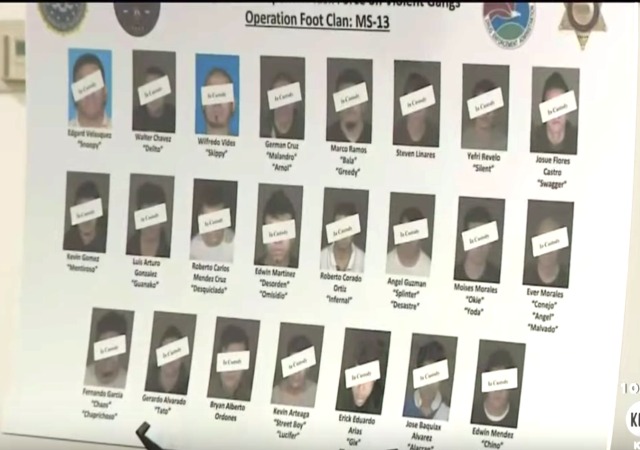 The United States Attorneys Office of the Central District of California announced they have indicted 22 members of the vicious MS-13 gang in a federal racketeering case that also includes allegations of gruesome murders.

The office wrote in a press release (emphasis mine):

A 12-count indictment unsealed Monday afternoon alleges that members and associates of the gang murdered seven people over the last two years. The indictment charges gang leaders who allegedly authorized and coordinated the murders. Also charged are gang members who allegedly murdered and attempted to murder rival gang members, those who were perceived to be cooperating with law enforcement, and, in one instance, a homeless man who was temporarily living in a park controlled by the gang.

The indictment focuses on a particularly violent subset of the gang known as the Fulton clique, which operates in the San Fernando Valley and has recently seen an influx of young immigrants from Central America. Under the influence of these young gangsters, younger associates who wanted to become members of MS-13 were “required to kill an MS-13 rival or someone perceived to be adverse to MS-13 to be initiated into MS-13,” according to the indictment.

In one murder detailed in the indictment, several MS-13 members allegedly targeted a rival gang member who was believed to have defaced MS-13 graffiti. On March 6, 2017, according to the indictment, the rival gang member was abducted, choked, and driven to a remote location in the Angeles National Forest, where six people attacked him with a machete. The victim was dismembered, and his body parts were thrown into a canyon after one of the defendants allegedly cut the heart out of the victim’s body.

The crimes fall under federal jurisdiction because they took place in Angeles National Forest.

Paul Delacourt, the assistant director in charge of the FBI’s Los Angeles field office, told the media that the city will not tolerate “medieval-style violence and senseless murder.” He hopes these charges send a message to the MS-13 gang.

Prosecutors believe the gang has murdered 24 people in Los Angeles in the past two years.

Nineteen of the 22 defendants came to America illegally from Central America. All of the defendants, except for 3, are under 24-years-old. Prosecutors have separate filings for two people since they took part in the crimes as juveniles.

But you will be labeled a racist if you call them “animals”.

Sounds like they are trying to revive the old Mayan religion.

The kamela – er – the camel’s nose is in the tent.

MS-13 … doing the killing Americans won’t do … say the dem-o-rats. Well, maybe it’s about time the Americans do some killing of their own … of the 3rd-world, MS-13 craphole invaders. Against the law? You think I give a crap? Strange times call for likewise action.

To be accurate: they are doing the killing the swamp/left/islamic axis won’t YET do.

The axis wants criminals as a wide part of their base because they can then buy them, and use them as murderous Brownshirts.

The joke, of course, is on the criminals. Like the SA Brownshirts under Hitler, their leaders would be exterminated as rivals if the axis gained power.

We’re living in a time where members of Congress openly hate American Jews, Catholics and Christians. The ‘rest of the story’ is easy to tell — unless we ALL realize the threat facing us.

Meanwhile, remember how horrible Trump was for suggesting that Puerto Rico’s political class was at fault for the poor post-hurricane conditions:

Makes me want to join the democrat party and reclaim it for America. We need a sincere pro-American party.

Democrats: importing the third-world shithole nation problems to here since 1965.

‘Paul Delacourt, the assistant director in charge of the FBI’s Los Angeles field office, told the media that the city will not tolerate “medieval-style violence and senseless murder.”’

They absolutely will ‘tolerate’ it, this is the FBI, and they spend all of their time investigating Republicans and conservatives and being the political hammer of the Democrats.

To call those Medieval murders is a slap in the face to our Christian European heritage. Out of respect you should change that to “Aztec style murders.”

The title of this is misleading. It should read the U.S. Attorney’s office located in Los Angeles……
The District Attorney in Los Angeles is actively trying to hide these peoples crimes and persons. No credit should be given to sanctuary cities officials.

Just think, if L.A. had just honored ICE detainers they could have avoided much of this.

You can bet this won’t receive much (any?) coverage from CNN and the rest f the media.