LIVE: Warren, Sanders Square Off Against Each Other in Democratic Debate

LIVE: Warren, Sanders Square Off Against Each Other in Democratic Debate

First Democratic debate of the second round. 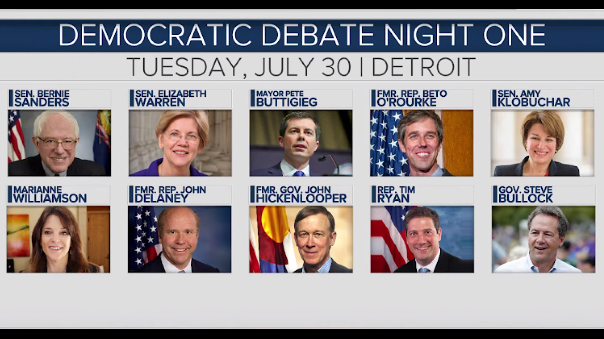 The second Democratic debate happens tonight at 8PM ET in Detroit, MI, on CNN. Since so many qualified for the second round, the Democratic Party spread the debate across two days with ten candidates each night.

Tonight we will see Sanders and Warren.

Click on the picture to watch the debate at CNN.com 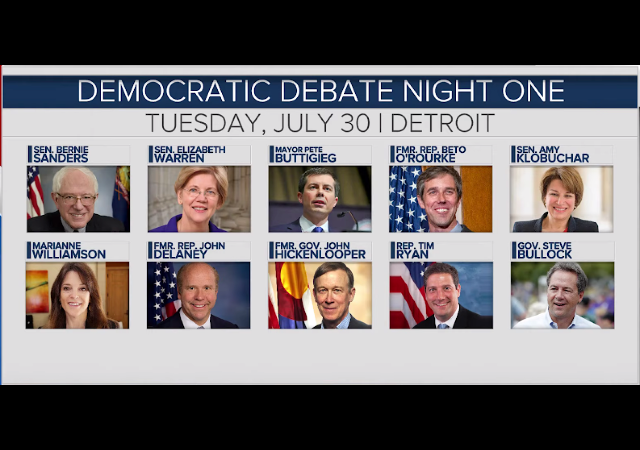 Can someone tell Elizabeth Warren about WWII?

WARREN: 'The United States is not going to use nuclear weapons preemptively, and we need to say so to the entire world.' #DemDebate pic.twitter.com/EbWndjVeOe

BUTTIGIEG: ''We will withdraw, we have to…I thought I was the last of the troops leaving Afghanistan…years ago.' #DemDebate pic.twitter.com/uLIJN8tHRN

O'ROURKE: 'It's time to bring those service members back home from Afghanistan, but also Iraq, Yemen, Somali, and Syria…We can resolve these challenges peacefully and diplomatically.' #DemDebate pic.twitter.com/61JH7PQ1QN

It took 95 minutes for the moderators to bring up the Flint, MI, water crisis, even though the debate is in Detroit. Williamson had the most emotional answer to the shock of no one.

‘…this is bigger than Flint..’ passionate speech by @marwilliamson at #DemDebate #marianne2020 pic.twitter.com/rC3THHGVgn

Williamson: the pollution crisis is bigger than Flint…
Me: yassss, tell them!
Williamson: …it's part of the dark psychic forces
Me: um, sashay away now plz#DemDebate pic.twitter.com/PKXaCvP0ju

Williamson calls Flint "the tip of the iceberg" and says there is environmental injustice across the country https://t.co/oSGRZAH3l8 #DemDebate pic.twitter.com/5IbrWf4NQb

Delaney spelled out his plan:

Climate change is not a Democratic or Republican issue. It’s an existential threat to our planet and way of life. My plan will reduce emissions significantly in the short term and get us to net zero carbon emissions by 2050. #DemDebate #Delaney2020

OK, I have to admit this is an odd question. CNN asked the candidates if the Sanders is too extreme to beat Trump. This isn’t a fair question even though I agree he is. Tim Ryan reminded everyone that Hillary also led in polls when Sanders boasted about his standings in the polls.

It’s basically a way to determine which candidate is far-left and moderates.

That evil NRA. No one could honestly give a straight answer because we all know what it comes down to: repealing the 2nd Amendment.

On the issue of gun control, Amy Klobuchar said the issue is not as much about policies, as it is about the NRA #DemDebate pic.twitter.com/1gMGQEiI0P

Hickenlooper: “We beat the NRA.”

Not mentioned: crime is up in Colorado since Hickenlooper signed those gun control laws in 2013. #DemDebate

KLOBUCHAR: ‘As your president, I will not fold.’ Sen. Klobuchar vowed to pass substantial gun reform and push back on the influence of the NRA. #DemDebate pic.twitter.com/cxUoYCbxBO

It’s all about open borders…even though they talked about laws and securing our borders. Anyone else the

WARREN: ‘As Americans, what we need to do is have a sane system that keeps us safe at the border but does not criminalize the activity of a mother fleeing here’ #DemDebate pic.twitter.com/dosAFEIjRS

Jake Tapper began the debate with health care. Sanders went off the rails with his Medicare for All while Delaney shot him down insisting that it’s suicide if the Democrats go with this way.

Sanders and Warren blasted the

WATCH: Elizabeth Warren can’t answer with a yes or no if her “Medicare for All” plan will raise taxes on middle class Americans. #DemDebate #DemocraticDebate pic.twitter.com/RRKqDbJkI1

WATCH: John Delaney calls out Bernie Sanders and Elizabeth Warren’s policies of “free everything” at the start of the #DemocraticDebate. #DemDebate pic.twitter.com/KhyNn23dME

.@PeteButtigieg only honest one who said…let’s just sneak in a pilot project of a “public option” that essentially strangulates vestiges of private insurance and then leave no other choices

At least AOC admits it.

Medicare for All is single-payer healthcare. That’s it. That’s the policy.

These candidates will take the stage tonight:

NPR had the same thought I did about Sanders and Warren. Will there be any distinctions drawn between the two? Something tells me they will try to out-socialism the other one with Sanders once again yelling at clouds.

If I recall correctly the candidates did not bring up former Special Counsel Robert Mueller in the last debate. That may change since he testified in front of two congressional committees last week.

I hope the debate does not turn into chaos like the first two nights on NBC.

Here, I offer my psychic-transcript blog of the Democrat debate so far this evening:

Harris: “I don’t want to accuse anyone specifically, but everyone here except me is racist swine!!”

Harris is “every” night.

Certainty about tonight and tomorrow night, 1) lots of lies will be told, 2) they will promise lots of “free” stuff, and 3) everything they propose will increase the power of government and decrease freedom.

The March of the Santa Clauses…. oh .. and little Jimmy will not get the Mattel Shoot’n Shell AK for “winter holiday” so that he will never be able to be naughty.

I will be watching “Never Come Down” at the local brew hut as I do most Tuesday evenings.

I have been avoiding the series but the women in my house are watching the final night of the bachelorette. So it’s a toss-up. They will be most likely equally edifying but which will have more drama?

I think some Czerny exercises followed by a bit of Arlen, Burgmüller, Kabalevsky, and a dash of Bartok before I settle on with a who dun it I’m reading.

“First Democratic debate of the second round.”

Have Dante wake me at the 5th level of this hell, so I can savor the burnt flesh of Leftism through the other four.

Of course it’s a drinking game…

There were a couple minutes there where Warren was arguing with Bullock about something. Warren was saying some ridiculous thing, and Bullock had the most wonderful smirk. I can’t imagine that Warren has a campaign left after that, but if she’s nominated it will make some easy TV spots for the Trump campaign.

Another split screen, this time with Warren gesticulating on the left and Hickenlooper on the right shaking his head and looking amazed. Just a few seconds, but wonderful.

I am watching on CNN. Maybe CNN is trying to eliminate Warren with these split-screens, because most of the debate is not split-screen, and Warren is the only one who has looked so bad in them.

Williamson saying the same irrelevant la la la stuff as last debate, she’s not interesting any more, plus we saw what she really thinks about requiring reparations.

Seeya Marianne, it was interesting, sort of, for a few minutes.

Detroit is a fine standard by which to evaluate democrats in their craft. The very model of socialism in practice and fact.

Once one of the worlds great cities, destroyed by the progs in a couple decades.

Yes, with the greatest industries in the world…..

Who screwed up Klobuchar’s eyebrows?

Oops, no, too busy to watch the Dems. Instead, I picked up the Kindle version of:

Justice on Trial: The Kavanaugh Confirmation and the Future of the Supreme Court Kindle Edition
by Mollie Hemingway

If Kamala Harris is nominated, the video of her questioning of Kavanaugh should be enough to sink her. She’s acting like the NKVD, bringing up a totally fictitious story to try to get Kavanaugh to slip up in some tiny way, to fall into a perjury trap about a completely made-up story.

Newton was right about action…reaction. For every positive step forward with Trump the Left goes for a negative step backward.

A good reason to legalize all drugs… having to sit through a Dem debate. Sometimes alcohol just doesn’t cut it.

Jeeezze. A nationwide talent search, and that pathetic lineup is the result.

Heh, another group of nuts on tomorrow night…