The maker of “Lightstrike” (Xenex Disinfection Systems) is a Texas Company! 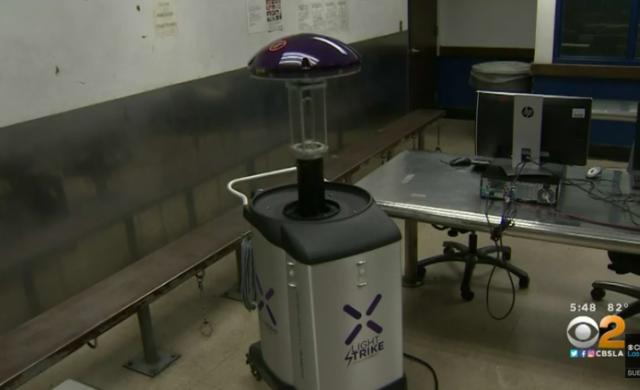 We recently reported that the area around the Los Angeles Police Department Skid Row station resembles something from the Dark Ages, with cases of flea-caused typhus and other potentially deadly diseases infecting some of its officers.

The LAPD is now using future-tech to battle the Medieval conditions plaguing its staff.

The Los Angeles Police Dept. on Friday unveiled a robot at the Central Station that was brought in to battle one of the station’s biggest foes — germs.

The Central Station is where an employee last month contracted the bacteria that causes typhoid fever. In response, LAPD Chief Michel Moore has introduced “Light Strike,” a robot designed to eliminate germs from an entire room.

“The cleanliness and safety of this facility has always been a challenge and a concern of LAPD,” Moore said.

The robot is called LightStrike and is part of a suite of corrective actions taken after officials levied multiple fines for rodent infestations and other unsanitary conditions at the Central Division station.

The unsanitary conditions in the 42-year-old building became the source of growing anger last month, as some officers threatened to seek transfers and city leaders scrambled to address the problems.

The board of directors for the Los Angeles Police Protective League, the police labor union, said last month that “officers worry enough about being shot or injured policing the streets of Los Angeles” and shouldn’t fear taking home infectious diseases.

In November, among the violations at the station on East 6th Street, according to the state, was that the LAPD did not train employees about how the dangerous bacterial disease typhus is transmitted, its symptoms or measures for prevention.

The department also did not have a program to exterminate and control rats, fleas, roaches, gnats, mosquitoes or grasshoppers in the building. Inspectors found all those in the facility, records show.

Ironically, the maker of “Lightstrike” (Xenex Disinfection Systems) is a Texas Company. Its unit can reportedly disinfect an entire patient room in as little as 20 minutes​. The LAPD intends to use it within the station.

The LAPD is now taking name suggestions for the new addition. Among the proposals are comments remarking on the conditions that led to the purchase of the system.

History is made! Never before has a germ-zapping robot been deployed in a police facility in this country. Much needed to address the hazards of working in #SkidRow Special thanks to the @MayorOfLA Now we need to name the robot…. we are taking suggestions! pic.twitter.com/6zA8VzDQHE

Stop-gap comes to mind. Have you guys thought about telling the powers that be their policies have only increased the problem or is it against LAPD policy to speak truth to power?

That’s not a badge of honor. It means your facility is disgusting. It put cops in danger in their own station. Before they even went 10-8 to face the known dangers.

Hope it kills bubonic plague. Whomever allowed the station to fall into such disrepair should be reassigned from command to latrine attendant. Disgraceful and harmful to everyone who enters this major police facility @Sal_LaBarbera @KnockoNolan @LAPDGND @LAPD0714 @OfficerDunphy

In conclusion: It appears that Texas is solving the problems California creates.

This simply stupid. What should happen is that the LEOs should simply refuse to work that district. The public health problem is not restricted to the interior of the station, but is rampant in the surrounding area as well. And, LEAs are not equipped to handle these type of hazmat conditions on an on-going basis. Sooner or later, some cop’s family is going to be infected with one of these diseases, contracted while the LEO was on the job in one of these areas, and there will be no police presence in these areas. That will go a lot farther toward the city taking the actions necessary to protect public health than this stupid machine.

If they could kill the germs in the station, then one area the cops spend hours in (and some spend their entire day in) would not be an additional contagion site. And even then, just the surface exposed to the UV light is sterilized, not any internal organic mass. And yes, the cockroaches and rodents coming back mean it is a losing battle as each sterilized room is promptly reinfected.

DDT for the cockroaches (and likely bedbugs) and something equally effective even if equally banned for the rodents followed by finding the dead rodent carcasses.

Los Angeles??
Desk sergeants, probably an in-house lockup until the main jail dispatch. some levels of higher ranking officers doing near full time paperwork, Evidence locker, non-police employees from janitorial to vehicle yard….
I would be surprised if a few dozen people do not regularly spend their 8 hours in that building, in addition to whatever officers do daily or pretrial paperwork (access to files and evidence) in the Central region police headquarters.

And don’t forget about all of the civilians who are stuck in that building for 8-10 hours on a daily basis. They don’t get to go out in a patrol car or a detective car and fool around like most of the officers and detectives do. If anybody is more at risk from this disgusting building, it’s the civilians…

What did we do when we figured out that rats spread disease?

How about cameras and small drones patrolling problem areas? Identify those crapping and shooting up in the area. When they are caught taking a dump, collect them and either take them to a cesspool or make one, and toss the offender in.

I bet they will stop crapping in the streets.

the street people are not capable of — ANYTHING —
they are ill, mentally and physically.
they need to be housed and fed – sounds to me like a jail problem. at least the streets will be cleaner.

if the aclu get them out make the aclu the legal guardians and present the aclu with bills to be paid – tute suite….

maybe some are incapable and should be locked up, but many, likely most are capable of using a bathroom. Gaining access to a bathroom may be difficult, in that most businesses and their customers do not want to be exposed to homeless people. That is a problem which could be dealt with with porta toilets.

I spent 2-3 months a year in DC, and when time permitted I offered to by fast food for homeless people. Most only wanted cash to buy booze or drugs. Some actually accepted the food. I was not going to pay for anything other than food.

I meta number of interesting veterans that way. As far as I could tell, none of them were crapping on sidewalks.

Throwing money at the symptoms is not going to do anything about the disease.

UV light sterilization will work unless it needs to penetrate
A phase change. (Water-air barrier ). And all dirt, oils, muck, need to be completely removed or it won’t work.

UV C will work, but it will also burn skin and eyes, just like welding flash.

By the way, UV C fluorescent bulbs are used in restaurants and are readily available. I have multiple building on my estate, all of which have UV C lights in the cold air return. They kill bacteria, viruses and fungus which is carried in the air.

So, what are they going to name it? Typhy McTypeface?

The biggest joke here is that Reina was made Commander. I guess all that ass-kissing of Bea Girmala finally paid off!
I worked Central Division in the late 90’s. It was a sh*thole then, and it’s likely unbearable now. I contracted Hepatitis A while working there, but no one cares about civilians and I had no recourse whatsoever.
Central Division should be torn down, it is beyond rectification no matter what the powers that be say- they are all liars anyway…