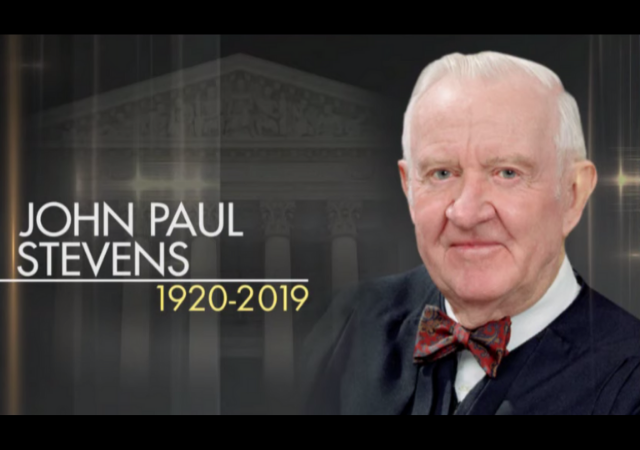 Tuesday, Justice John Paul Stevens passed away at the age of 99. Justice Stevens’ retirement from the Supreme Court paved the way for Justice Keagan’s appointment.

Tuesday evening, the White House released a statement. From The Hill:

“The President and the First Lady offer their deepest condolences to the family and friends of Retired Supreme Court Justice John Paul Stevens, who passed away this evening,” press secretary Stephanie Grisham said in a statement, noting he was a decorated World War II veteran “known for his humility, legal acumen, and affection for his beloved Chicago Cubs.”

“His work over the course of nearly 35 years on the Supreme Court will continue to shape the legal framework of our Nation for years to come. His passion for the law and for our country will not soon be forgotten,” Grisham added.

The Supreme Court announced earlier on Tuesday evening that Stevens had passed away.

Appointed by President Gerald Ford to the nation’s top court, where he served from 1975 to 2010, Stevens became one of leading liberal justices on the bench.

A legacy of unbridled liberalism and Trump hatred.

The people he hated were always Us – Trump just became the focus of that hatred in the last couple years of his life.

Condolences to the family. Death is always painful for them, whether it be a newborn, or a person who has lived a long and full life. May they find comfort.

For all of his bad decisions, he did get Crawford v. Marion County Election Board right.

Democrats have to be breathing a sigh of relief.

Stevens was appointed to the highest court in the land, a position of power only a tiny handful of men and women have ever been given. He took an oath to uphold the Constitution, and then proceeded to break that oath repeatedly. Like many of his fellow travelers on the Left Stevens came to despise the Constitution and his judicial legacy is mostly one of shame. He will be remembered for the harm he caused by misusing his position but he will not be missed.

He is just one in a long series of Supreme Court justices appointed by Republican presidents, who have turned out to be wolves in sheeps clothing.
You can start with Earl Warren, whose appointment Eisenhower described as the biggest mistake he ever made.
Souter was appointed by George H.W. Bush, based on assurances that he was a conservative by Sununu. He was in actuality a doctrinaire liberal.
Blackman was appointed by Nixon, and proceeded to gift the nation Roe vs. Wade.
I haven’t yet made my mind up about Roberts, but it isn’t looking good so far.

I won’t be shedding a tear.

McDonald dissent – the phrase “all laws” in 14A somehow means we can pick or exclude any laws we chose to incorporate.

CU dissent – Corporations and Associations have no 1A rights because they arent people. Under his line of legal reasoning, the government can take property without due process from a corporation, trust, partnership, estate, association, because they are not people – even though the entity is owned by a person.

If you listen closely you can hear liberal buttholes snapping closed like bear traps, until they realize he was a retired justice.

The greatest thing he ever did for the country is to retire.

His “distinguished past” will never compensate for Kelo.

Maybe the SCOTUS will get back to being judicial rather than legislating.

The weirdest thing I recall about Stevens was a statement (apparently in reference to Heller) after he left the Court. He hated the Bill of Rights so much that he seriously claimed that local legislatures (who are “familiar with local conditions” or some such rot) should be able to blow off Constitutional civil rights at whim. This is as definite a repudiation of Marbury v. Madison as I’ve ever heard from a federal judge, and a very odd one, as it would eliminate the very concept of “unconstitutionality” and eviscerate the courts.

Appointing someone like Stevens to a court makes about as much sense as hiring a flat-earther as a navigator. Perhaps he wasn’t quite so whacked when he was younger; in which case he’s an unbeatable example of the need for judicial term limits.

“”This is as definite a repudiation of Marbury v. Madison as I’ve ever heard from a federal judge,””

So… you’re saying he wasn’t ALL bad?

He, like may other people who obtain positions of power, let it utterly corrupt him. Once he realized he held power over the lives of 300+ million people, he decided it was his right to decide how we live our lives and what rights we’re allowed to hold. I hope he rotting in a really hot place right now.

Good riddance. Should have happened a long time ago.

“Justice Stevens, we have you down in the smoking section. Would you prefer Original or Extra Crispy?” Lucifer