Joe Biden Holds Strong Lead, Warns Opponents He Will ‘Not be as Polite This Time’

Joe Biden Holds Strong Lead, Warns Opponents He Will ‘Not be as Polite This Time’

Biden said that Harris and Booker “got a past that’s not quite as good.” 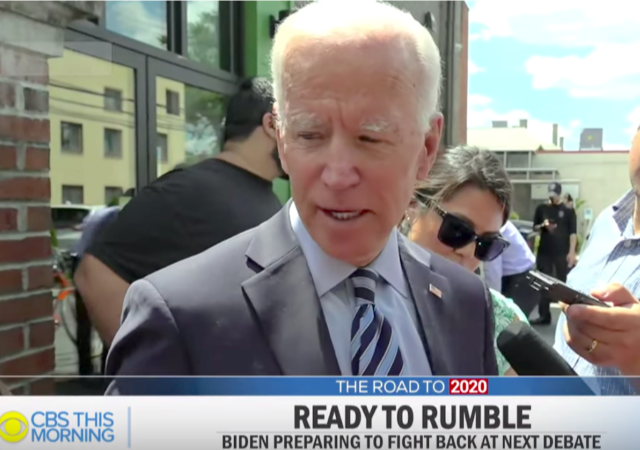 Biden’s numbers suffered a bit after the first debate, especially after Sen. Kamala Harris (D-CA) brought up his history working with segregationalists.

That will not happen the next time around as he vows to “hit back” against any attacks. It also helps that he will go into this debate with just as strong poll numbers as the first debate.

Biden has not forgotten the attacks from Harris at the last debate. His rivalry with Sen. Cory Booker (D-NJ) also received a boost this week after the senator described Biden as the “architect of mass incarceration” due to his support of a 1994 crime bill.

Biden will appear on the debate stage with Harris and Booker. From The Hill:

“You can’t be called the architect of mass incarceration and remain quiet,” a Biden ally said. “That’s cruel and personal. That goes against his entire career. You can’t let people say bullshit and not respond to it.”

“The gloves are off,” the ally added. “At this point, you have to punch back when someone attacks your record. People want to see him throw a punch. The president is certainly going to come at him hard, so why not start now?”

The arrival of Fighter Joe comes as a relief to Biden’s supporters and sets the stage for a potentially brutal showdown next week in Detroit, where Biden, Booker and Sen. Kamala Harris (Calif.) will share the same debate stage.

Biden fired back as he reminded people of his eight years in office with President Barack Obama.

“They did a significant background check on me for months with ten people – I doubt he would’ve picked me if these accusations about me being wrong on civil rights [were] correct,” Biden stressed.

Biden told donors in Detroit that he will not “be as polite this time.” He dropped hints that he may bring up the political histories of Harris and Booker. Biden is proud of his past, but said that Harris and Booker “got a past that’s not quite as good.”

In a radio interview Thursday, he also raised questions about Harris’ motives at the first debate. “I thought we were friends,” Biden said. “I mean, I hope we still will be. You know, she asked me to go to her convention and be the guy from outside of California to nominate her at her convention for the Senate seat. I did.”

Biden, Harris, and New Jersey Senator Cory Booker will be front-and-center at a debate next Wednesday.

“For a guy who helped to be an architect of mass incarceration, this is an inadequate solution,” Booker said.

But Biden hit back, raising questions about Booker’s past record as mayor of Newark, New Jersey. “His police department was stopping and frisking people, mostly African American men,” Biden said. “If he wants to go back and talk about records, I’m happy to do that. But I’d rather talk about the future.”

The polls show that Biden bounced back after the disastrous first debate. A Quinnipiac University Poll shows that Biden leads President Donald Trump in Ohio with 52% of the surveyed people preferring Biden while Trump received 42%. Trump leads or tied with the other Democratic candidates.

The CBS News Battleground Tracker Poll has Biden in the lead with 25%, but Sen. Elizabeth Warren (MA) only trails at 20%. Harris landed in third with 16% and Sen. Bernie Sanders (I-VT) in fourth at 15%.

In this poll, Biden earned a lot of votes from respondents due to his electability and those “who would prefer that a candidate take a more polite and civil tone.”

While the Democratic candidates take time to attack each other, this poll showed people care more about “hearing how candidates would run against Mr. Trump.”

Those four candidates received a boost from June 2019.

A Monmouth University poll found Biden has a commanding lead in the critical state of South Carolina. He landed in first with 39% of the support while Harris got second at a distant 12%.

As much as Harris and Booker like to criticize Biden’s past on race issues, 51% of the blacks in South Carolina chose the former vice president. Harris once again came in second at 12%.

He’s going to grope them.

Good luck Joe getting a word in edgewise with Kamala, she NEVER stops yakking..!!!!

EXCEPT when she and Willie Brown are “busy”.

Nothing Biden will do, either being “polite” which is his word for being old and worn out (mental agility is low, which is not good for Clueless Biden), or being “tough” like threatening to beat up the President, he will be torn apart by the media and their “regular people” plants.

Plugs is not the choice, and dang gum it, the propaganda wing will make sure public opinion slumps for him.

Harris will be praised again, and propped up no matter how poorly she does.

If think if Harris gets on Good Old Joe, Joe is just going to walk over and punch her in the face. You know, like he threatened to do with Trump.

Biden is going to make Robert Mueller look competent and engaged by comparison.

It also helps that he will go into this debate with just as strong poll numbers as the first debate.

And that gives you an estimate of just how useful these polls aren’t.

You went total Romney in the debate. Was saying “Busing was a disaster and merely increased racial tension” so hard to say. Further your staff later should have exposed her lies about being part of the Berkeley integration effort.

Better watch out girls (and soy boys). Old Slow Joe has got his dukes up, and is going to take you out behind the gym and beat you up! ROTFLMAO

Actually the biggest change is Joe Biden altering his coloration again and adopting the mantle of Mayor Pete, attacking evangelicals for deigning to support Trump in violation of their stated religious principles (as the Pattericos of the world would have it).

I’ll be blunt about this. I would love to see a better Democratic Party, one not so much moderate as enlightened. What we are witnessing is Democrats trying to win by running against Trump voters, damning them as unpatriotic, unfaithful to their religion, anti-military and anti-minority. This is a very… novel approach? Demonizing the voters while campaigning for their votes (even allowing for this being “just” the primary) is a strange way to do business be it in the US, the UK, or most countries, really.

What you describe are the actions of people who have decided that Ideological Purity is far more important than grubby, low, concerns like winning elections.

In that way, they and the Never Trumpers are the perfect match. They’d much rather lose and say “but I was right!!” than do the kinds of things that would actually give them a chance of winning.

I predict a Biden / Gabbard ticket. Gabbard is already working with Biden, that’s why she attacked Harris a few days ago.

Biden had probably turned down Harris for his VP slot, that’s why she was mad and went after him in the first debate.

Gabbard is female, a tall female, not totally white and is in the military. And she’s a flaming leftist and no big problems in her past. That’s why Biden picked her.

All I need is popcorn. Got plenty of Yuengling on my last trip to Ohio.