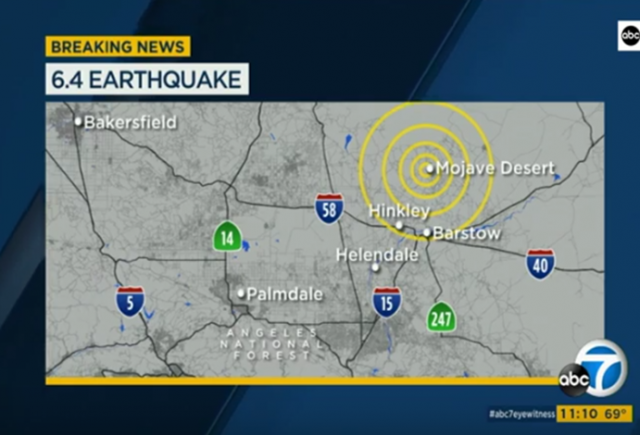 As I sipped my coffee and read about today’s upcoming “Salute to America” celebration in Washington, D.C., I felt the distinctive vibrations of a significant earthquake somewhere in Southern California.

I chuckled a little, as the seismic activity on this particular day seemed appropriate given the fact our politicians have made the Golden State the epicenter of the #Resist movement. It was the most massive quake to hit the region in 20 years.

The largest earthquake in two decades rattled Southern California on Thursday morning, shaking communities from Las Vegas to Long Beach and ending a quiet period in the state’s seismic history.

Striking at 10:33 a.m., the magnitude 6.4 temblor was centered about 125 miles northeast of Los Angeles in the remote Searles Valley area of Kern County.

…The quake was the largest with an epicenter in Southern California since the 7.1 Hector Mine quake struck the Twentynine Palms Marine Corps base in 1999. The last earthquake felt as widely as Thursday’s was the magnitude 7.2 earthquake on Easter Sunday 2010 that had an epicenter across the border in Baja California.

Before Thursday, it had been almost five years since the state experienced an earthquake of magnitude 6 or stronger. Experts had said the period of calm was sure to end, and when it did it would likely bring destruction.

The US Geological Survey (USGS) determined the earthquake occurred near Searles Valley, a sparsely populated area of our state. While this isn’t a significant shaker, regular reports of earthquake-caused fires and damage have been coming in around the hardest hit areas of Kern County.

The Kern County Fire Department said the Ridgecrest Regional Hospital was evacuated. The department said it was working nearly two dozens incidents ranging from medical assistance to structure fires in and around the city of Ridgecrest.

Mayor Peggy Breeden said at least five fires broke out in the city of 28,000.

“It almost gave me a heart attack,” said Cora Burke, a waitress at Midway Cafe in Ridgecrest. “It’s just a rolling feeling inside the building, inside the cafe. And all of a sudden, everything started falling off the shelf, glasses, the refrigerator and everything in the small refrigerator fell over.”

Trona, an unincorporated community, “sustained varying degrees of damage” but no injuries have been reported, according to San Bernadino County Fire’s verified Twitter account.

Perhaps one of the saddest consequences of today’s earthquake was the inventory loss at the Eastridge Market liquor store.

The store owner’s son, Victor Abudullatif, tells ABC the quake woke the family up at their home in Burbank.

“We have a German Shepherd, I thought it was my dog hitting the side of my bed,” he said. “Sometimes she gets into the house she’s an outdoor dog. And then I realized five seconds into it okay this is a full on earthquake.”

Abudullatif says an employee sent them video of the damage.

“Tons of bottles were damaged they were falling,” he said.

They believe the damage to equipment and store items may be more than $100,000.

My dads liquor store in Ridgecrest (11 miles from the earthquake) ???? pic.twitter.com/4RC0mY3eha

The shaking in San Diego was minimal.

I sure hope our Legal Insurrection fans also had a rocking Independence Day, but in a good way.

Been fully briefed on earthquake in Southern California. All seems to be very much under control!

American tectonic plates are the best plates in the world.

It’s all President Trumps fault, if he had not been trying to spin them on a stick. AOC is slowing down! I beat her to it. LOL! Dumb asses!

Reseda had rolling shakers, while the west side didn’t fee; much at all.

Leslie, do have helpful neighbors or do we need get your LI fan club out there to help with the rebuilding? I have a very good level and I’m sure someone has a backhoe to lift the chain upright. Possibly, we might need to put down some concrete to bolt the chair to in case there is another quake.

Well, with the DoD building two of the nation’s largest military bases in the Mohave Desert, the Army’s Ft. Irwin and the Marine’s Twentynine Palms, I’m thankful that the Mohave only cracked and didn’t tip over.

Maybe the Marine Corps was just planning ahead when they built 29 Palms. One of the units that call it home is..drum roll….

The 3rd Amphib were on the beach east of us (3rd 8″ Howitzer) just south of where the Chu Lai airport was being built in 1966. Unlike 3rd Amphip, the 8 inch howitzer is no longer organic to the Marine Corps

Spent a couple of months on the Rivera in late 67, but never made it to Chu Lai. 8 inch was self propelled wasn’t it? My knowledge of non 03 stuff only extends to stuff to be ridden.

all that happened here in The Valley, like totally, was scaring the hello out of the house lions.

I missed it completely. I may have been driving.

I thought it was tanks rolling in.

I felt it here. Nothing major but it did rattle my lights and doors and my big vase on the credenza walked maybe a half inch. There have been maybe 100 aftershocks of over 2.5 since but I felt none of them until one this morning just after 4am which registered 5.0.

In early June, there was a swarm of earthquakes in Fontana where the USGS cautioned this might be a sign of more and bigger earthquakes soon.

It amazes me how one home can be demolished by a quake and another nearby practically unscathed. In ’84, I was on assignment in Morgan Hill – Coyote and rode out a 6.2 quake on the Calavaras fault. The contractor sent us home in the early afternoon. Several of the condos in the complex looked like they’d been tumbled in a dryer. Mine was unscathed, with one exception; my kid’s goldfish died.

@ 4th Armored: I hope the Shakers stopped rolling. That way, they can get back to building that great furniture.

This is probably going to cripple business for the local summer vacation resort Industrial Waste Pond. I think they should rename it.

I was visting Los Angeles on July 4th. The quake was hardly felt in LA.

The mentally ill and criminal maniacs and their filth everywhere on the streets of LA? Now THAT was scary.