Police searching for a suspect possibly connected to the shooting. 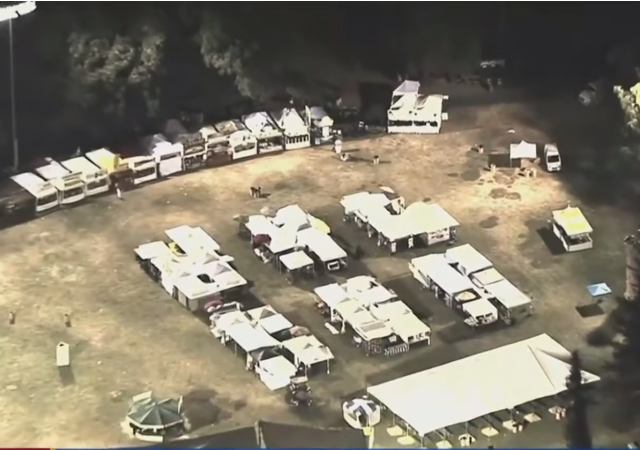 A gunman opened fire on the Gilroy Garlic Festival in Gilroy, CA, on Sunday evening. He killed three people, including a 6-year-old boy, and injured 12 others.

Sources told local media that a second suspect remains on the run, but no one has said anything about this person’s role in the shooting.

***I will update this post as authorities release more information.

The shooting began around 5:41 PM. From CBS SF Bay Area:

During a press conference Sunday evening, police confirmed that four were dead in total, including one suspected gunman, and 15 were injured.

Gilroy Police Chief Scot Smithee said the suspect gained entry into the festival by cutting a fence to circumvent security.

The shooting happened while the band Tin Man performed on stage. Singer Jack van Breen told the media “he saw a man wearing a green shirt and grayish handkerchief around his neck fire into the food area with what looked like an assault rifle.” The band dove under the stage to take cover.

They also have no motive why the man shot up the popular three-day food festival.

6 year old Steven Romero of San Jose is one of the 3 victims killed in the Gilroy Garlic Festival Shooting. RIP ?? @nbcbayarea https://t.co/anfqNSVs3p pic.twitter.com/ioE5fDagj7

Taylor Pellegrini, 25, told The Los Angeles Times she found the security weak at the festival. Security checked her bags, but not her friend’s bag.

Vivian Zhang, 24, credited the volunteers after the shooting started:

A truck they were standing next to was struck four times; bullets ricocheted off the ground.

That’s when they began running as fast as they could.

“They started putting all of us on the parking shuttles,” said Zhang, an Oakland resident. “To their credit, the volunteers running it were very responsive. They weren’t panicking.”

Evenny Reyes described the chaos as people ran for the exits as others threw tables and cut through fences to get out. One man wrapped a bandana around his leg. He saw people crying and heard others screaming.

i guess I know what “topic” will be on the front pages and leading every cable news broadcast this week. So long racist Trump and Baltimore. Hello gun control.

More like we need gun control because the shooter was triggered (as it were) by the racist Donald Trump.

Maybe. I think it’s more likely there will be endless moralizing and shrieking that no state or city has a chance to make their gun laws effective so long as somebody, somewhere, in this violent and racist country has easier access to weapons. Federalize gun laws NOW!!!

Or that seems to be where the anti-gun folks have arrived and think they may get the most traction. And I’d bet my 401K that every Dem candidate will be drilled about it by CNN and they will be hyper-emotional in talking about how we need to restrict guns at the federal level in the next debate. (Is that soon? Talk about timing!)

We do have Federal level gun control laws – called the 2nd Amendment.

And, a slew of federal statutes that infringe on our natural right of self defense:

But, one more federal law ought to solve the problem.

The firearm per CBS is an “assault-style assault weapon”… which makes sense if you are a mushroom. Words used to mean something concrete, definable and of value…. now just distorted noise.

Just waiting for CBS to just say the firearm is “double plus ungood” and we will have arrived in Oceania.

I’m going to guess some random nutter, looking for some infamy before checking out of this existence. That or somebody with a heavy duty grudge, though with grudges one usually has a specific target in mind and not random people at a festival.

The targets/victims seem to unfocused to be a grudge. Typically more of a workplace or local government office kind of thing. This is more like your first description – psychotic blaze of glory exit.

Why would they start putting people on the shuttles? At what point did they start rounding people up? Under what authority? Who would go along with the group?

It’s unfair to say “security was weak”; first, he cut a fence to get in, second, this wasn’t an airline boarding area, there weren’t metal detectors and scanners set up. Usually fairs like this have multiple ways to get in and out, and there’s no way to watch them all. I’m interested in finding out how the shooter was stopped.

From what I’ve read this morning the local police were present at a festival (North?) gate and took him down about a minute into his shooting. Hate to see the loss of life and injuries, but that is damned quick response time.

The security staff wanded people entering & checked their bags, and it was posted & advertised as being a weapons-free festival, and that not even pocketknives would be allowed.

That’s why the shooter cut the fence to get in.

He was shot dead by some of the many uniformed police who were providing security, who acted very quickly and deserve commendation.

So Newsome will introduce a ban – what firearm(s) will be banned will be determined real soon now. And the legislators will pass it promptly.

Another “first step”. Ban this or that and the venue changes just like in Europe…

I wonder what the average IQ in California is now versus..say…50 years ago. I know logic has faded .

They’ll go after semi-automatics. The media has already described his weapon as a “rapid fire assault rifle” and repeated witness statements that he was “spraying the crowd” and “using a machine gun”. The left wants to blur the differences between semi-automatics and true machine guns until the uneducated public doesn’t know there’s a difference.

The deceased gunman has been identified as Santino William Legan, 19, CBS News has learned

from that article the police say the rifle was an SKS…an AK-47 variant. If it was an SKS then it shows the police are ignorant or lying. Totally different designs. SKS predates the AK. SKS never fully automatic.

Yep….SKS. The police are deceiving the public and aided by their masters and MSM… average people don’t know. When law enforcement lies we all pay the price.

Garlic Festival? Must have been a vampire.

Well this explains mostly radio silence in mainsream since last night. He had quotes on his media (now shutdown) from Might is Right by Ragnar R. Expansion on socialism. It will get spun as white supremacy though not social anarchy which is what it is.

If so….The facts must be redirected. Jumping the….gun.. on direct action before any balloon going up must be squelched. Socialism is always only good …

“Santino”…. I wonder what origin that comes from. Another “white” something?

I was trying to avoid race. But his twitter screenshots on Heavy.com says that he is Italian/Iranian

Fully understand but names only mean something when someone tries to change the narrative. Example is George Zimmerman being a “white” Hispanic. Not much one could do with “Trayvon” except show him as a 12 year old instead of an older larger teenager.

Just have to wait and see.

He used the word “mestizos”. It means part white. Long time since I heard that word. It is used almost exclusively by Spanish speakers in the Americas and the Philippines.

It’s not really the words he used and their background/creation but the fact alone that he was exhibiting a minor psychosis and was using race in the first place as a way to channel his mental problem. Sort of like thinking you see a ghost and then backtracking to find a reason to lead you to having seen that apparition (like imagining some horrific murder in the house, etc.).

Conservatives are evacuating as they are able, making it even more uniformly leftist. Make of that what you will.

A guy in Japan recently killed 33 people with a can of gas.

Narcissistic, radicalized people do these kinds of things, guns or no guns.

Gun control is not the answer. Leftist control in our schools is.

Over 50 killed in NYC years ago with gas can attack.

The thing is that there are many ways to kill large numbers of people using common products. I am surprised that so few people are aware of them. Anyone with broad ranging scientific and engineering interests probably has ample capabilities to create mayam.

The reason so few people are aware of this is that the news media do not want us to truly understand any issue; they only want us to respond blindly and emotionally to whatever biased news they report.
The Japan gas can murders got so little coverage because the killer did not use a gun and therefore is not useful to the anti-gun zealots–and indeed because widespread knowledge of what he did would undermine the zealots’ agenda.
(And newsies wonder why so many Americans do not respect them.)

So how do you legally buy a WASR-10 in Nevada with a California ID? Something’s fishy.

Patrick Purdy specifically did that and got the ball rolling in Stockton, Ca to move the “assault weapons ban” with Handgun Control.
Killing kids is the best way to become infamous and in the history books. Purdy had a semi version of the AKM also… The FORMULA works every time with the MSM and Progs.

Oh… and killing “white” kids versus looking the other way in Baltimore and Chicago. Can’t mix reality with the narrative.

Maybe we should take a moment of pause for the 6 year old kid was murdered as were others … rather than immediately jumping into the gun control issue.

One wonders why anyone would target a child?

IF you do that then liberals won’t have a coffin to use as a soapbox.

He did not target anyone. He was spraying bullets indiscriminately.