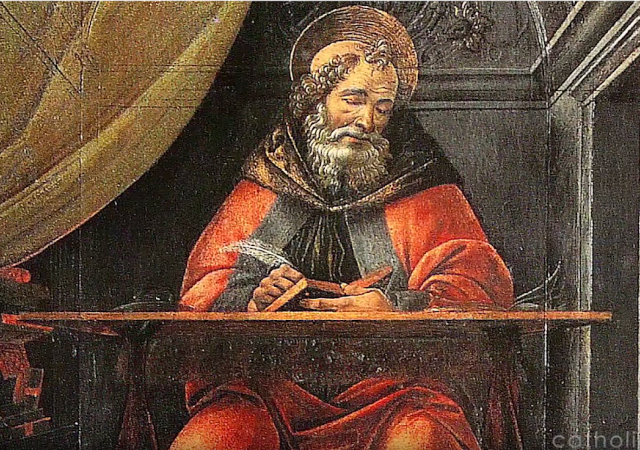 Facebook is going overboard in an attempt to make sure nobody gets their feelings hurt on the platform.

Pro-life activist Domenico Bettinelli claimed that Facebook deleted a quote from St. Augustine because it violated the platform’s Community Standards on hate speech.

From The Catholic Herold:

“Let us never assume that if we live good lives we will be without sin; our lives should be praised only when we continue to beg for pardon. But men are hopeless creatures, and the less they concentrate on their own sins, the more interested they become in the sins of others. They seek to criticize, not to correct. Unable to excuse themselves, they are ready to accuse others.”

In a post on Facebook, Bettinelli said the quote “is just a reformulation of Jesus’ own words from Matthew 7:3 “Why do you notice the splinter in your brother’s eye, but do not perceive the wooden beam in your own eye?” Is the Gospel hate speech by Facebook’s standards?”

Bettinelli posted the quote after he saw that two priests had posted the excerpt from the Office of Readings and that it had been flagged by Facebook. They believed that an algorithm was flagging the content.

After his post was also removed, Bettinelli requested a human review appealing the decision and later received notice that his appeal was rejected.

HOW is that quote hate speech? Bettinelli refused to accept Facebook’s explanation:

In his response to the failed appeal, Bettinelli wrote: “I still don’t understand why this is hate speech. It’s a quote from a Catholic saint who expresses the opposite of hate speech. He is essentially restating the words of Jesus Christ in the Gospels to stop worrying about what the other guy is or isn’t doing and worry about your own flaws. Is Facebook saying that the Gospel is hate speech? But what’s worse is that I have no more understanding now of what is a violation of your community standards than I did before. I cannot for the life of me figure out why you label this hate speech.”

He later told LifeSiteNews that he may have found an answer to the mystery: “A friend posted just ‘men are hopeless creatures’ and that got banned, so that seems to be the relevant part that is hate speech,” he said.

Please remember the First Amendment only applies to the federal government. A private business can do whatever it wants. If Facebook wants to censor a quote from a peaceful Catholic saint then so be it, but we sure as hell can complain about it.

Is the Gospel hate speech by Facebook’s standards?

Yes. It lays out an objective morality that makes progs feel bad.

A time is coming when men will go mad, and when they see someone who is not mad, they will attack him, saying, “You are mad; you are not like us.”

Agree. With the emphasize on “moron” for sure. 😉

“the less they concentrate on their own sins, the more interested they become in the sins of others.”

A perfect illustration of what occurs here.

Why is anyone still using FB?

Is there not a competitor that with additional traffic could compete?

If everyone left they would have to change or disappear

For Augustine charity was thinking the best of others rather than the worst. That’s how it wound up being soul-saving.

“Affectation of candour is common enough—one meets with it everywhere. But to be candid without ostentation or design — to take the good of everybody’s character and make it still better, and say nothing of the bad — belongs to you alone.”

SCOTUS seems to say because of the 14th A, or somesuch, the 1st A applies to states – so how can states have codes covering BDS or hate speech (including banning anti-Semitism).

That’s easy: They don’t. There is no state, city, or other government agency in the USA that bans “hate speech”, antisemitism, or any other kind of speech. BDS supporters are free to advocate boycotting Israel, or Jews, or black people, or anyone else. But the moment they act on that advocacy they break the law. The first amendment protects speech, including expressive action, but it does not protect non-expressive acts.

I wonder if a class action suit is in order. These companies are immune from suit under Section 230 of the Communications Decency Act, a law orginally intended to allow parents to protect children.

So, if they violate that section by failing to act in good faith, is their immunity waived? That is, can they be treated as publishers?

There does seem to be wide-spread co-ordinated attempts to suppress political viewpoints that are not otherwise unlawful.

In this case, it’s not even political speech.

Section 230 of the CDA was not intended to allow parents to protect children. It was intended for the purpose it serves — to allow the existence of interactive computer services. It does not make these companies immune from lawsuits; it merely says they’re not responsible for what other people write on their platforms, even if they moderate user-posted content. It says deleting some user content doesn’t make a host responsible for everything else. That is all.

And no, there is no requirement that they “act in good faith”, by which I suppose you to mean that they be politically neutral. The moderators of this comment section, for instance, are entitled to delete comments they disagree with, without thereby turning LI into the publisher of the comments they don’t delete.

Monopoly status. Break it up into pieces. Same for google gulag.

That would require Barr to actually do something productive!

Defending the President from invented charges is productive.

One need not attribute to malice an act which may be mere stupidity.

Denying the human review seems neither malicious or stupid, just the usual “how dare you question our judgement?” arrogance. I don’t suppose Augustine thought all that highly of arrogance either.

Although it’s conceivable that a human reviewer might find that the suggestion (to look after one’s own faults before criticizing those of others) hit just a little too close to home. And if that made the reviewer feel bad, well, then it must be hate speech.

Denying the human review seems neither malicious or stupid, just the usual “how dare you question our judgement?” arrogance.

No, it’s a brilliant move. So that when Facebook deletes/bans the wrong quote/statement or whatever and the organic matter really hits the rotary mechanism they can always pull out the, “Oh, it was a mistake by the algorithm.” excuse and wash their hands of the whole matter.

Apparently, Pelagius is now on Facebook’s Board of Directors.

Face it .. Facehole is pathetic

Is the Gospel hate speech by Facebook’s standards?

Yes, the Christian gospel is hate speech by Facebook’s standards and fit to be banned. But Facebook won’t do the same if it was a quote the Koran. Guaranteed.

I bet they did it because “men” is an exclusionary and hateful term. What about women? What about trans women or trans men? What about people who refuse such a binary framing of personhood?

This form of Christian censorship is as damaging as the current levels of Christian persecution seen around the world, which is worsening year on year.

Christianity in USA and the rest of the world is in dramatic decline and needs resurrecting…… not censoring!

We as individual Christians need to take up the Great Commission and do our part to ensure that His Life and His words live for eternity. We have the technology and capability to each create our own mini fb or website/blog and say what we want.

Facebook (etal) are running into a lot of resistance from the Jews, so they figure they’ll take a run at the Christians now.
No matter: the Socialists will always find some group to stuff into the cattle cars.

Speaking of Facebook, and Big Tech in general, does anyone have insight into these claims?

Facebook is going overboard in an attempt to make sure no liberal SJW gets their feelings hurt on the platform. FIFY

Don’t they know at FB that St Augustin was an African?
RACIST BIGOTS!!!

Why is anybody on the right still on Facebook? Quit giving them free content; they hate you, so quit making money for them.

Facebook acts only claims of hurtness (sorry!), by victicrats (HT Larry Elder). Actual logic and critical thinking they sacrificed in their dumpster fire years ago.