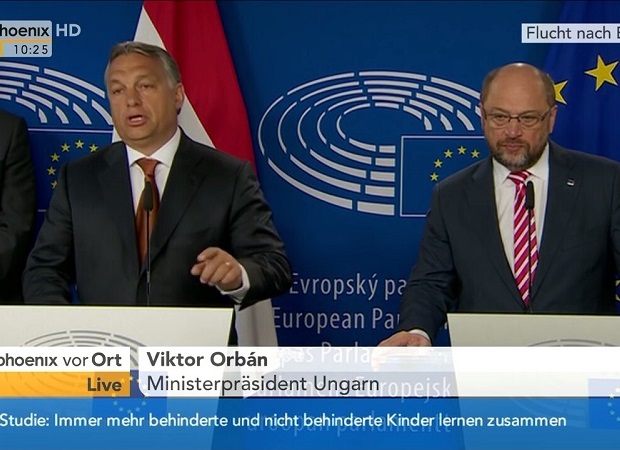 The European Union is taking Hungary to court over the country’s immigration law, German public broadcaster Deutsche Welle reported. The legal action by Brussels seeks to repeal a law passed last year by Hungary’s parliament aimed at securing the country’s borders and combating illegal trafficking of migrants. The case will he heard by the top EU court, the European Court of Justice.

The legislation is known as the “Stop Soros” law, named after Hungarian-born U.S. investor George Soros who funds far-left causes across the world. The legislation restricts the ability of non-governmental organisations (NGOs)—like the ones funded by Soros—from interfering in the country’s asylum procedures.

The European Commission filed a case against Hungary at the European Court of Justice on Thursday over the “Stop Soros” law, which makes it a crime to help asylum seekers and enforces new restrictions on the right to claim asylum.

The title refers to Hungarian-born billionaire George Soros, who has been regularly targeted by the nationalist government of Prime Minister Viktor Orban for allegedly supporting mass migration into Europe.

“The Hungarian legislation curtails asylum applicants’ right to communicate with and be assisted by relevant national, international and non-governmental organisations by criminalising support to asylum applications,” the Commission said.

The law “is not compatible with EU or international law,” it added.

The legal measures against Hungary appear meant to deter other EU member states from implementing laws restricting illegal immigration. The lawsuit will send “an unambiguous message to all member states that laws, such as ‘Stop Soros,’ . . . will be challenged at every level,” said Eve Geddie, head of Amnesty’s EU division.

Deplored by the commissars in Brussels, Prime Minister Viktor Orban enjoys strong support for his tough stance of illegal immigration at home. In a 2016 referendum, 98 percent of Hungarian voters sided with Prime Minister Orban in rejecting the EU’s migrant relocation plan. He scored a stunning victory in last year’s general elections, winning almost half of the vote and a two-thirds majority in the national parliament.

President Donald Trump has often praised the Hungarian leader for his prudent immigration policy. “You’ve done a good job and you’ve kept your country safe,” the U.S. president told Prime Minister Orban during his White House visit in May.

It remains to be seen how Hungary will fare at the European Court of Justice, the top EU court. The Luxembourg-based court has a track record of handing out rulings supportive of the EU’s open border immigration policies. In June 2017, the ECJ dismissed a lawsuit filed by Hungary and Slovakia challenging the EU’s mandatory migrant relocation plan. In a ruling earlier this year, the court prohibited German immigration officers from checking passports on cross-border buses entering the country.

This is what happens when you give sovereignty to an outside source.

A country who can not determine who can come in and who must stay out, is not a country. It is a freeway.

I predict that the EU will win in EU court, because OF COURSE they will.

Fought two world wars and a cold war to prevent a European Continental superpower from dictating to the world. Looks like the globalists are on the run.

The EU’s actions are, in effect, a declaration of war against Hungary. By threatening a nation for not allowing an invasion by the Muslim hordes.

The same countries who brought us two world wars now lecture and threaten the rest of us because they know better.

The Hungarians have been fighting off Muslims for centuries. They’re not about to open the door and receive them graciously.

That’s what France should have done when Germany invaded them in WWII. Take them to court. Subpoena Hitler and his gang and if they ignore them, have them arrested. Unbelievable.

I figure Trump is about 25% on the way to destroying the anti-freedom EU. By the end of the first term it will be 50%, accelerating to full destruction shortly after his re-election.

“In a 2016 referendum, 98 percent of Hungarian voters sided with Prime Minister Orban in rejecting the EU’s migrant relocation plan.”

Just freaking WOW! That’s higher than the percentage of blacks who voted for our black Jesus! Who knew the Hungarians were SO SMART! Hungary will lose in court; their best strategy is following Britain in saying bye-bye to the EU.

“It remains to be seen how Hungary will fare at the European Court of Justice, the top EU court.”

Remains to be seen? Really, there’s a shred of doubt how this ruling will go? It’s already at the printer.

Hungary is the only sane country out of the lot of them. If Hungary goes, there is no hope for EU countries until they all fall under moslems, then engage in civil war to reclaim themselves. It’s going to be nasty because the moslems fight barbaricly.

Very sad situation. So glad I’m not in the EU.

Poland is 86% Catholic – and has similar feelings as Hungary regarding forced migration quotas by the EU.

There are some sanctions that can be imposed only by unanimous EU vote (except for the country being sanctioned of course). Since there are Poland and Hungary, each can veto attacks against the other.

One such country can’t survive there alone. But two can, working together.

Same in Slovakia and Slovenia and Croatia…all of us (I live in Slovakia and have a summer house in Croatia) have a common northern border with Hungary, have huge Christian populations, and have all been on the Muslim Armies parade route to conquer Vienna. This will not go over well with many of the Central European member States.

There was the Marshall Plan for Europe…. maybe it’s time for a Trump Plan… separate European-USA trading partnership and defense pact.

Even though you don’t know Hungarian, I suspect you can quickly figure out the meaning of this term. 😉

(PS: It’s an abbreviation for “nyald ki a seggem”, which Google translates correctly.)

And yet people are still confused why Brexit happened.

I expect ECJ rules against Hungary.

If it would help them resist, I’d hope Trump funnels equivalent US foreign aid to them to make up the European shortfall. Quietly is best.

And when Hungary asks “How many divisions does the EU Court have?”

As a general rule, for a ruler, king, President, General or Admiral, or any other power to maintain legitimacy, they should never issue an order that will be ignored.

Someone has read The Little Prince

The Little Prince is one of those books highly recommended by librarians and educators. But never required reading, hence, I’ve never read it, just seen it laying around.

In general, when it comes to books highly recommended by librarians and educators, I don’t read them unless required for course work.

It’s required reading for anyone who wants to think usefully about the world. OK, maybe not strictly required, but highly useful. It’s one of the books every educated person ought to have read (only a fraction of which I have myself read).

Maybe joining the EU wasn’t all that its cracked up to be. (Seems that the U.K. realized this).

Humgary has a choice…bow to the EU court which will demand they turn their country over to hostile violent Muslim immigrants or ignore them and whatever economic sanctions they might take. If they leave they will see the EU actually stops and lessens any economic growth with layers and layers of regulations and taxes. Keep your country or hand it away to third worlders we want to have it….that’s the choice the EU has given all it’s members….France and Germany and Sweden all chose to hand their country over….

Wonder if the EU is feeling just great right now that it looks like Brexit might actually happen. Boris Johnson the new UK PM has said it absolutely will, this October 29.

They are probably feeling a bit less than great, actually.

Probably “a little less great” as he has been talking amnesty and is still open to massive immigration.

In 30 years, Hungary will be a Orthodox/Catholic country surrounded by Muslim countries. They still have many battles ahead of them.

A little more of this and Hungary will be able to confirm the rising authoritarian state, the sort they have lots of experience with.

And tell the EU to GFYS