El Salvador President on Death of Migrants: ‘They Fled Our Country. It is Our Fault’

El Salvador President on Death of Migrants: ‘They Fled Our Country. It is Our Fault’

“We will make a country that is more prosperous and that can provide decent paying jobs for all of our people.” 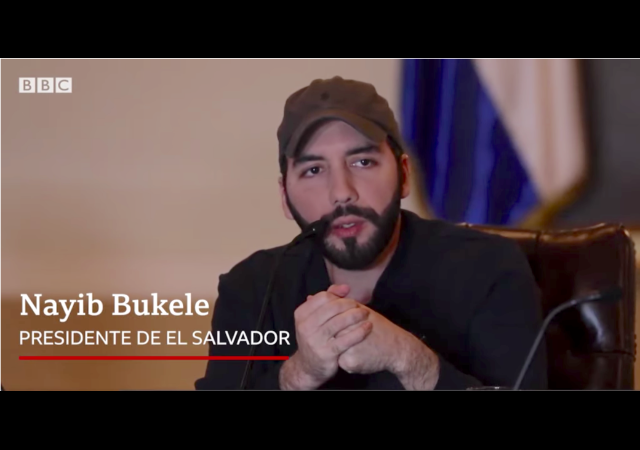 The photo of Óscar Martinez and his daughter, who drowned trying to reach the United States shook the world. Many have blamed President Donald Trump and American policies, but El Salvador President Nayib Bukele, elected in February, took the blame. From the BBC:

“We can blame any other country but what about our blame? What country did they flee? Did they flee the United States? They fled El Salvador, they fled our country. It is our fault.”

Martinez and his wife lived with his mother-in-law when they decided their jobs “at a pizza parlor and as a restaurant cashier would never provide enough money to be able to purchase a modest home in their suburb of San Salvador.”

Bukele became president last month. He has blamed officials because no one has lowered the crime rate, helped the economic problems, or ended the government corruption.

The BBC listed the problems in El Salvador:

Bukele does not approve of the treatment of migrants in America, but stressed that El Salvador has to fix the country, so people do not feel the need to flee:

“I think migration is a right, but it should be an option, not an obligation. And right now it’s an obligation for a lot of people.”

Bukele’s remarks are a change from other leaders in the past because many have not tried to stop people from migrating to America since those people will send money back to the country. The New York Times reported that “Salvadorans abroad sent nearly $5.5 billion in remittances to El Salvador, equivalent to about 20 percent of the nation’s gross domestic product, according to the World Bank” in 2018. Around 1.4 million Salvadorans reside in America.

Bukele stated that he wants to work with Trump “to improve relations with the United States.” However, he knows that he has to tackle problems at home “to curb the outflow of Salvadorans.” The New York Times continued:

“They feel it is safer to cross a desert, three frontiers, and all of the things that may happen in the road to the United States because they feel that’s more secure than living here,” he said. “So we want to make our country safer.”

He also vowed to address the poverty and lack of employment opportunities that so many migrants cite as their reason for fleeing.

“We will make a country that is more prosperous and that can provide decent paying jobs for all of our people,” he said. “So if people have an opportunity for a decent job, a decent education, a decent health care system and security, I know that forceful migration will be reduced to zero.”

Bukele said the way our government handles migration, which is not exclusive to Trump’s administration, is not the way to stop migration.

He is 100% correct. The way to stop migration is to make a country healthy and economically stable. Why else do you think all those celebrities stayed in America after they declared they would move if President George W. Bush or Trump won the presidency? Because America rocks.

“They fled El Salvador, they fled our country. It is our fault.”

Yes, it certainly is your fault.

“I think migration is a right.”

No, it certainly is not. No foreigner has a “right” to enter the U.S. and live here illegally. And millions of them certainly have no “right” to come here (or send their children here) illegally, or to demand “free” health care and other accommodations from us, or to work here illegally, or to fraudulently sign up for taxpayer-funded benefits here. And yet, millions continue to do those things, and worse.

Migration, immigration, sure, in accordance with the laws of your destination, and doesn’t exceed the rate of assimilation and integration before planned parenthood.

Immigration reform, including refugee crises, mass migration, mass exodus, no. That’s evidence of a progressive condition that begs for a military intervention or quarantine to contain the contagion.

They come here because we provide incentives for them to do so.

I’m not sure of the trade situations with many of the Central American countries. But if their governments had this same attitude, then I would be in favor of giving them some assistance and favorable trade policies.

Encouraging businesses to invest in these smaller countries without a penalty may help with the migration issues.

Absolutely. The prerequisite for a good neighbor policy are good faith actions. It seems that Bukele is on the right path.

He’s a politician too. If this is what he has to say to get something positive done, so be it. Obviously the issue is the results.

“Bukele does not approve of the treatment of migrants in America”

We do not approve of illegals, they cost us a great deal of money, that is money which should be spent on citizens. In the end, I do not care rather he approves or not.

Any country whose citizens are illegally entering the US should to the degree they are receiving any aid from America see reductions in that aid.

He is afraid President Trump will cut off the money.

I’m not sure if there will be a post on the AOC comments about her “tour” of the El Paso facilities, so I’ll comment here…

I worked for an international NGO and had the privilege of traveling overseas for the charity. When I was in Honduras, my recollection of public facilities was that they were filthy and we were told to bring supplies (TP) and put the paper in the overflowing waste basket. Flushing paper down would cause major sanitation issues. But, the homes that we visited were neat and well-cared for, even if the people were considered to be very poor. It was a concept of common vs private facilities. I think we see that here in the US – see conservative rallies vs liberal/progressive rallies.

While in Africa, the conditions in the villages were even more primitive, but there was still an effort to maintain a level of cleanliness. In many villages, the trek to get water was a major effort.

I was lucky to get a warm bucket of water for my morning bath. I learned how to wash my hair and body with one bucket of water. Heck, after one try, I figured out how to have leftover water for a great splash of water. Oh, and the other facilities were a hole in the ground, so I didn’t have to worry about the sewer systems.

We, and other western societies, have a great economic situation and we sometimes forget about how we may have lived 50-100 years ago or how some of us still exist.

That situation looks so crazy, I cannot fairly represent it without use of expletives, which I strenuously avoid on LI. I’m going to try and wait for the facts to bubble to the surface.

But it’s hard. And today it is harder than most.

I tend to think that what was reported by AOC were an exaggeration and that some of the illegals may have been told or figured out what to say to gain sympathy.

I hope that the Border Patrol starts filming such visits to ensure that there is an accurate document of the environment. If AOC was “sexually harassed”, I want to see the recording.

I saw a recording of the boarder patrol doing CPR on a person who drowned while crossing – any “atta boys” shouted out by AOC to those guys? Doubt it.

“reported by AOC were an exaggeration”

No border agent would touch AOC with a ten foot pole, so you can start there.

AOC is a liar. She lies about everything.

they decided their jobs “at a pizza parlor and as a restaurant cashier would never provide enough money to be able to purchase a modest home in their suburb of San Salvador.”

Jobs at a pizza parlour and as a restaurant cashier wouldn’t be enough to purchase a modest home in most suburbs in Canada.

Not going to be enough to buy a home in the US either – maybe not even a mobile home. In some places – like Vermont – it might not even be enough to rent an apartment.

“they decided their jobs “at a pizza parlor and as a restaurant cashier would never provide enough money to be able to purchase a modest home in their suburb of San Salvador.”

So they came to the U.S. to go on welfare, get Medicaid, food stamps, and Section 8 housing.

The easiest way to illustrate the immigration problem is with the use of houses.

So, you are the owner and resident of the mansion. You hire people from other houses to come into yours and work for you. You host travelers and other guests. Then, you get up one morning and find a unknown family living in your house, eating your food, wearing your clothing, collecting valuables and sending some of then down the hill to other unknown people. You say, “leave”. And these people refuse. So, you call your parents and ask them for permission to remove the unknown squatters, And your parents tell you that they are not going to throw the trespassing burglars out, even though they have no right to be there. And, while they are telling you this, several more families sneak in the back and side doors. How do you feel?

Welcome to the United States of America in the 21st Century.

Martinez and his wife lived with his mother-in-law when they decided their jobs “at a pizza parlor and as a restaurant cashier would never provide enough money to be able to purchase a modest home in their suburb of San Salvador.”

And Willie Sutton (probably didn’t actually) say that he robbed banks because that’s where the money is.

Wanting stuff you don’t have is not in itself a convincing reason for anyone else to give it to you. And a plan to get it by illegal means doesn’t make the reason any more convincing.

Is the problem in El Salvador low wages or progressive prices? In America, the issue is progressively the latter, as special and peculiar interests are granted liberal license to set color quotas (“diversity”), speech rights, jurisdictional integrity, monopolies and practices (e.g. Obamcares), etc.

Nothing works except pain inflicted upon the exploiters of our nation.

Maybe. However, a good neighbor policy is in every community… nation’s interest. Immigration reform including refugee crises, mass migration, mass exodus, etc. is an unsustainable policy that produces casualties and collateral damage at both ends of the bridge and throughout.