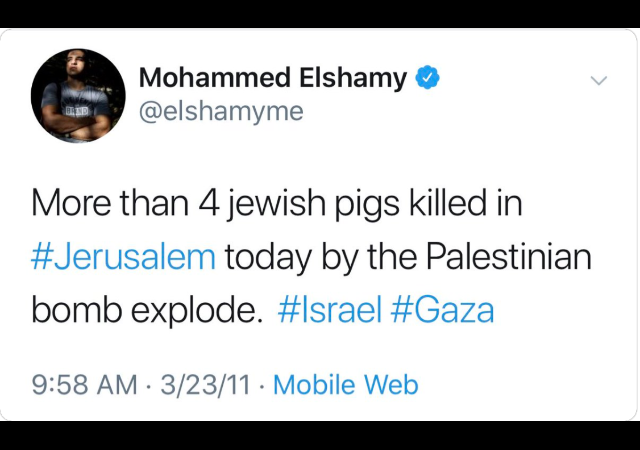 CNN and the left cannot complain about this happening because last week the network dug through Monica Crowley’s old tweets and blog posts after President Donald Trump appointed her as assistant treasury secretary for public affairs.

So why can’t the left complain about this?

Remember, back in 2016, Crowley withdrew from consideration for the position of senior director of strategic communications for the National Security Council after Kaczynski’s team accused her of plagiarism in her book and doctoral thesis.

So a week after Trump picked Crowley, Andrew Kaczynski decided to go after Crowley again. His team brought up old tweets and blog posts from Crowley that criticized President Barack Obama for his support to build a mosque near Ground Zero, wondered about his loyalties to America, and questioned why it took him so long to produce his birth certificate.

Whatever. It just seems to me Kaczynski has it out for Crowley for some weird reason.

ANYWAY. GOP operative Arthur Schwartz gave the network a taste of its own medicine when he unearthed tweets of a far more sinister nature by its photo editor Mohammed Elshamy.

Hey @CNNPR. How does someone like @elshamyme who tweets things like this get through the hiring process at CNN? Asking for some friends. pic.twitter.com/6NAjINmYhQ

Hey @CNNPR. You should have @KFILE look into the social media activities of your employees. He might find things like this gem from CNN’s @elshamyme talking about “Jewish pigs” killed by Palestinian terrorists. pic.twitter.com/NwL2d78RME

Elshamy made his account private now, but The Washington Examiner captured the anti-Semitic tweets. 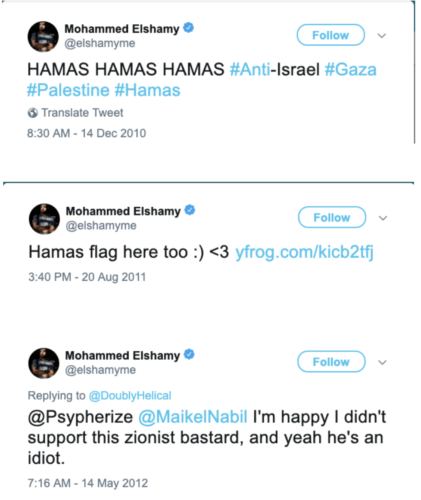 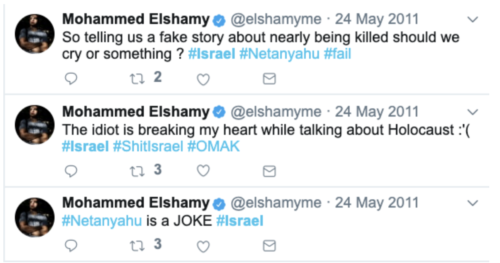 The Washington Free Beacon has more tweets, but since Elshamy has a private account now, the tweets do not show up well. In these tweets, he celebrated when the “Zionest embassy” took down its flag with an ALLAHU AKBAR.

Can we STOP doing this? Both sides?! These blog posts and tweets came out back in 2010 and 2011. Almost ten years ago. It is possible that people change and evolve. It is possible and if so then a person should not have their lives destroyed over it.

But, according to Omar and the est of the left, white males are the most dangerous.

oh well yeah! That’s why when this stuff happens, it’s always the guy named “Mohammed” that you least suspect.

CNN accepted the resignation, but I doubt they’d ever have asked for it.

I am sure Brian Stelter will cover this on his Reliable Sources show, which is about the media. lol.

It’s very possible that CNN knew what Omar was when they hired him…and virtually certain that they knew while he worked for them.

I like to stay up to date and on point with my racial slurs. Can anyone explain what “lick Jewish legs” means. Hes got me stumped. We need to setup a differently tarded translator for CNN employees.

Also, it’s possible that 4 Jewish pigs were killed. I know they aren’t supposed to eat them but can they raise them?
I raised 4 pigs last year but I believe they were atheists. It’s kind of hard to tell; they spent most of their time laying around sleeping when they werent wandering around grunting.

Going from Jihadi to non-Jihadi is not quite like going from, say, vegan to non-vegan.

“Can we STOP doing this? Both sides?! These blog posts and tweets came out back in 2010 and 2011. Almost ten years ago. It is possible that people change and evolve. It is possible and if so then a person should not have their lives destroyed over it.”

NO it is a war now. The “conservatives” have been getting their butts kicked for years trying to appeal to folks that have no intention of play fair or being nice. It’s time to take their tactics and turn them against our foes. If you really want to save this country the days of nice are over…otherwise all of the ink that gets spilled9digital or otherwise) will get replaced with a red fluid that we do not want…being nice will not prevent actual shooting anymore…unfortunately.

TU Hescomin…. you have said clearly what I also believe.

I would expand “conservatives” to “the Judeo-Christian Morality/Greco-Roman Law” culture.

Which has been getting its butt kicked globally…..and btw is not a synonym for “White.”

Of course it’s possible that he changed. But people who change usually say so and do more to express their regret than simply making their Twitter feed private.

Precisely. Making your public feed private AFTER you are nailed is not a sign of “i am sorry i have changed”…it is to hide what you did that got you canned so that in the future it cannot be used against you again. No remorse…and considering his chosen religion he is NOT going to change either.

I have a doubt as to whether anti-Semites reform.

Point of observation: CNN contributor Marc Lamont Hill’s dog whistle call for violence against Israel, “from the river to the sea”, at the U.N. was a mere 8 months ago.

And Hill is long-time BFF with infamous Jew hater Louis Farrakhan. Yet, CNN employed him anyway.

The real question is, is it a CNN problem or a pattern?

He may have resigned, but he’s probably still on the payroll as an outside contractor.